CULTURE
Heady Entertainment: Fire Up Fatties for “First Man,” “Studio 54," and Kurt Vile
AD
The best pot-friendly pop culture of the week! Also including some scare season gems, from a "Creepshow" reissue, to the new show "The Haunting of Hill House."
Published on October 12, 2018

At the movies, Bad Times at the El Royale is a dope blast of Tarantino-esque nasty fun; First Man is a way-out visual trip into space; and Studio 54 is a true-vice account of the ultimate temple to sex, drugs, and disco. As Halloween looms, horror highly dominates streaming options with Apostle, The Haunting of Hill House, and Light as a Feather.

It’s also scare season on Blu-ray as the ’80s terror classics The Changeling and Creepshow arrive in collector’s editions. Music, meanwhile, offers a mixed bag of hip-hop from Belly, experimental mind-melts from the Residents, and genre-bending freak rock from Kurt Vile. So let’s get straight — but not “straight” — to this week’s fresh-rolled recommendations.

Seven desperate characters (played by an all-star cast) settle in on the rundown Lake Tahoe hotel of the title in Bad Times at the El Royale, a twisty neo-noir set in 1969 but tapped deep into the mysteries of the eternal.

Dakota Johnson shines as a hippie chick on the run, Jon Hamm is all slow-simmer menace as a salesman from the deep south, and Jeff Bridges — The Dude himself — abides indeed in the role of an Irish priest who clearly isn’t actually Irish, let alone a priest. Getting wasted and trying to keep up with the surprise of Bad Times at the El Royale proves to be a kick-ass good time.

Ryan Gosling stars in First Man as Neil Armstrong, the NASA astronaut who in 1969 got higher than any human being in history — literally — by piloting a mission to the moon. The plot is stirringly heroic and the performances are top-notch and all that…

What MERRY JANE readers really want to know, however, is this: how dope is the interstellar action and deep space footage to get blitzed to in IMAX 3D? Good news, fellow toke-travelers: when it comes to mind-blowing visual effects that pair well with botanical rocket fuel, First Man is absolutely first-rate.

Studio 54 arrives in theaters as the definitive documentary on the legendary New York nightspot. For 33 nonstop months beginning in 1977, the (in)famous disco pit erupted as humanity’s reigning apex of drug-fueled excess and omnisexual decadence set to a booming beat. Hollywood headliners, music superstars, and international dignitaries burned it up nightly with Manhattan’s flashiest freaks until the inevitable crash that ended with the club’s founders doing hard time. Still, there was no ride like it and Studio 54, the movie, takes us deep inside the mirrorball madness.

Gareth Evans, who made the cult-classic Indonesian action blowouts The Raid (2011) and The Raid 2 (2014), injects Netflix with his ultra-hype style by way of Apostle, a thriller set in 1905 about a creep-inducing religious cult on a scary remote island. To reveal more would be to potentially blunt Apostle’s impact. Instead, just torch a blunt and get ready for the movie’s supremely high impact.

Girls creators Lena Dunham and Jenni Konner punch up HBO anew with Camping, a twisted sitcom about some decidedly non-outdoorsy old friends who reunite at a run-down wilderness resort. Jennifer Garner tears it up as a control freak, and the rest of the cast — including David Tennant, Juliette Lewis, Arturo Del Puerto, and party monster supreme Bridget Everett — is such a riot, you may keep trying to pass your pipe to them while you watch.

Inspired by Shirley Jackson’s classic novel, The Haunting of Hill House is Netflix’s spine-tingling new series here to spike your Halloween edibles with some extra spooky treats. The show follows the hapless Crain family that buys the cursed abode of the title thinking they can fix it up and flip — only, of course, to be caught tight in the terror of Hill House’s supernatural grip. Think of this as a more grown-up version of Stranger Things. Then add extra weed accordingly.

The new teen horror series Light as a Feather takes its name from the classic sleepover game “Light as a Feather, Stiff as a Board,” and then brings to life your most paranoid fantasies about what might happen after you played it while passing a joint for the first time. Five girls mess with the supernatural, and the supernatural messes with them back. Smoke along and shiver.

While Arrow, Black Lightning, Gotham and the other DC hero TV shows provide fine ample opportunity to get lit and geek out, Titans promises to up the game by going harder. This live-action adaptation of Teen Titans is running on DC Universe, the comic book giant’s new online outlet, so pack a bong and brace yourself for dark, dank doings among Dick Grayson aka Robin (Brenton Thwaites), Rachel Roth aka Raven (Teagan Croft), Gar Logan aka Beast Boy (Ryan Potter) and Koriand'r aka Starfire (Anna Diop).

One of the creepiest slow-burn haunted house thrillers ever made is perfect for getting high to as the air grows thick with Halloween. The Changeling stars George C. Scott as a composer who moves into a Seattle mansion where the spirit of a murdered boy sets him off to solve the initial crime and uncover the evil conspiracy behind it. Beautiful, moving, and a paranoiac’s dream come true.

When it comes to ’80s fright film classics, Creepshow is the Big One with the Big Two — namely, all-time scare scribe champion Stephen King and zombie-kingpin director George Romero. Together, King and Romero turned Creepshow into an instant classic by conjuring five terror tales in the sick-joke vein of 1950s monster comics. With iconic moments that range from the beheaded birthday cake to Fluffy the big-fanged box beast to the most flesh-crawling insect invasion ever mounted, Creepshow hits like an hybrid strain of masterfully cultivated smoke, straight out of hell — which makes it sheer heaven for horror fans who get high.

Wildman writer-director Jim Van Bebber launched his career as the Sam Peckinpah of underground cinema with Deadbeat at Dawn, a bone-crunching, blood-splattered masterwork of gnarly grindhouse greatness. Van Bebber stars here as Goose, an outlaw biker who attempts to go straight, only to have other gang members slaughter his girlfriend. What follows, then, is an explosion of Goose exacting vengeance in so over-the-top a fashion you’ll need to rewind the flick repeatedly to believe it — while ripping a fresh bong load with each viewing, of course. 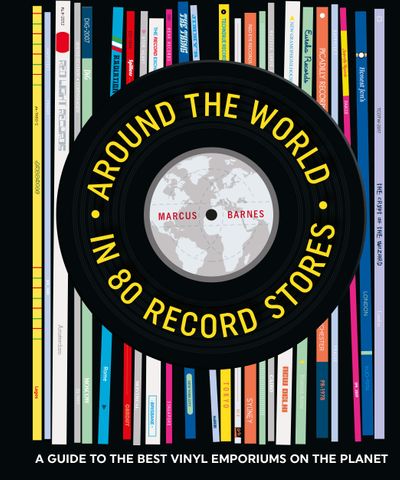 “Around the World in 80 Record Stores: A Guide to the Best Vinyl Emporiums on the Planet”
by Marcus Barnes
Get It: Quimby’s Bookstore

Collecting vinyl and consuming cannabis seems to go together like — well, putting on a record and getting stoned to properly enjoy it (and not just due to the old school practice of separating seeds and stems on album covers). Around the World in 80 Record Stores, then, offers a global tour of where to score primo long-players wherever your smoking adventures take you. Author Marcus Barnes chronicles the crate-digging action everywhere from Iceland to India, expertly reporting on both warehouse-sized emporiums to niche shops that specialize in every possible genre of music.

“Bottle It In”
By Kurt Vile
Get It: Matador Records

Over the past decade, Kurt Vile has soared as one of rock’s most engagingly unpredictable wildcards. As such, any new Kurt Vile record is an occasion to get stoned and let that voice and those magic fingers on the fretboard take over. On Bottle It In, Kurt bounds from folk-punk to cracked country to acid rock and on to points unknown — oftentimes in the span a single song. So grab Bottle It In, and then spark it up.

“Immigrant”
By Belly
Get It: Belly Live

Belly goes political on Immigrant, and decidedly so. "With everything going on, I can’t sit by and say nothing. I decided to speak my truths.” As a result, Immigrant is a fully-charged follow-up to The Revolution, Belly’s last full-length album all the way back in 2007 (it’s been all mixtapes since then). Ignite an inspirational strain and imbibe along to Belly’s rousing calls to action, accompanied here by guests that include Jay-Z, The Weeknd, NAV, and YG.

“Intruders”
By The Residents
Get It: MVD

Bay Area blazers of new trails for nearly 50 years now, The Residents rack up another avant-garde triumph with Intruders, a soundscape described as “shifting from the physical world of train wrecks to the metaphysical realm of imaginary beings.” As always, The Residents weave a brain-banging hallucinatory universe here; approach it without drugs at your own risk.

420
MUSIC
TELEVISION
CELEBRITIES
MORE...
Mike McPadden
FOLLOW
Mike McPadden is the author of "Heavy Metal Movies" and the upcoming "Last American Virgins." He writes about movies, music, and crime in Chicago. Twitter @mcbeardo
Share this article with your friends!
AD
By using our site you agree to our use of cookies to deliver a better experience.
Accept
Decline
MORE FROM MERRY JANE