CULTURE
Heady Entertainment: The Top Movies and Music Worth Blazing for This Weekend
AD
This week, Tarantino returns, Seth Rogen and Evan Goldberg bring another comic series to live-action life, and Chance the Rapper drops his first studio album (finally).
Published on July 26, 2019

Movie theaters everywhere this weekend are being blasted back to the summer of ’69 by way of Quentin Tarantino’s Once Upon a Time in Hollywood, so pack accordingly — as in your pipe, tightly, with the most acidic strains you can come by.

Smokably freaky sci-fi and two-fisted fantasy streams this weekend in the form of Another Life on Netflix and The Boys on Amazon Prime. Bashir Salahuddin and Diallo Riddle smoke their way through the windy city on Comedy Central’s South Side. And after seven seasons of lock-up, the landmark Netflix series Orange Is the New Black ends its term with enlightening insights well worth lighting up for.

The book department goes badass with Compliments of Chicagohoodz: Chicago Street Gang Art & Culture by James “Jinx” O’Connor and Damen “Mr. C” Corrado. It’s a collection of gang ephemera guaranteed to blow your mind beyond whatever you’re on as you peruse it.

New music is dominated from the debut album from Chance the Rapper, the latest heavy-psych opus from Queens of the Stone Age off-shoot Mini Mansions, and sweetly lit soundscapes by way of electronica maven Mono/Poly.

So let’s get straight — but not “straight” to this week’s fresh-rolled recommendations.

Once Upon a Time in Hollywood unleashes moviemaking madman Quentin Tarantino on the drugs, sex, drugs, rock-‘n’-roll, and drugs of 1969 Tinseltown. The movie business is in transition with weed and acid replacing cigars and martinis, brash new directors usurping the old studio squares, and legitimately dangerous types latching on to show biz talents with tanked-up, tripped-out, and occasionally apocalyptic results.

Most times, we recommend getting lit and hitting the multiplex to be inundated with 3D visual effects extravaganzas. This week, Once Upon a Time in Hollywood is scorching theaters nationwide with high-minded artistry and psychedelically rendered thrills, drama, and food for thought. It’s Tarantino’s ultimate trip (to date). Blast off and dive deep with him.

We all first got high to Katee Sackhoff on Battlestar Galactica. Now on the new Netflix series Another Life, we can smoke to Katee soaring among the stars again as she plays astronaut Niko Breckenridge, the leader of a young space crew dispatched to discover the origins of an alien artifact that just suddenly showed up on Earth. Light your ganja rockets accordingly.

Stoner entertainment overlords Evan Goldberg and Seth Rogen follow-up Preacher, their glorious gritty TV adaption of the Garth Ennis comic book series, with The Boys. Karl Urban stars as Billy Butcher, the kingpin of The Boys, a vigilante cabal that targets superheroes who abuse their powers. The series is slick, it’s sick, it features Simon Pegg, and it’s everything you want to blaze up and get bombarded by in a show with this premise from these creative overseers.

Veteran funnymen Bashir Salahuddin and Diallo Riddle team up both behind and in front of the camera for South Side, a new scripted series on Comedy Central about the Englewood neighborhood of Chicago, which too often generates news stories that are no laughing matter.

With that in mind, Salahuddin and Riddle set out to show a deeper, richer, funnier aspect of the area and those who live and work there. They play recent community college graduates out to navigate the neighborhood and its often warm, occasionally outrageous characters through side-hustles and hearty humor. South Side guests include Lil Rel Howery, Kel Mitchell, and Wilco frontman Jeff Tweedy.

After seven seasons, the breakthrough women-in-prison Netflix series Orange Is the New Black goes out in its signature style. It’s hilarious, horrifying, heartbreaking, and enlightening — all at once.

Stupid anti-drug policies initially led Piper Chapman (Taylor Schilling) in lockup at Litchfield Penitentiary, and, amid the interlocking stories of her fellow inmates, we see clearly how prohibition only destroys lives — even as we watch these ladies survive and thrive under unnecessarily oppressive circumstances.

A slow-burn ’80s slasher favorite, Mountaintop Motel Massacre chronicles Anna Chappell as Evelyn. She’s the titular rest stop’s owner and proprietor who occasionally wigs out to a degree that many visitors who check in to the Mountaintop Motel don’t check out — at least not in one piece.

Shot amidst menacingly rundown cabins in the vast Texas countryside by acclaimed cinematographer Joseph Wilcots, Mountaintop Motel Massacre mixes creepy fun with some genuinely unsettling moments of credible madness, amped up by buckets of blood. As always, the heroes at Vinegar Syndrome have beautifully restored this drive-in gem for proper pristine viewing now with an appropriately loaded pipe.

Bruno Mattei (Hell of the Living Dead, Violence in a Women’s Prison) is one of the wildest directors in the perpetually reefer-ready realm of vintage Italian exploitation and Robowar is one of his all-time most insane efforts. So, that makes it a must for your retro-stoner schlock-flick viewing parties… like, now!

In one fell swoop, Robowar rambunctiously rips off Rambo, Predator, RoboCop, The Terminator, and the berserk tradition of Filipino jungle combat films with no money and gallons of gore galore. A crack team of commandos lands in the remote tropics on a rescue mission, only to run up against an enemy described as “a kill-crazed creature that is part man, part machine, and all glorious ’80s sleaze!”

Many stoner flick fans initially got to know This Island Earth by way of the verbal abuse it endured in Mystery Science Theater 3000: The Movie (1996). Now, thanks to Shout Factory, we can all toke up and watch this landmark sci-fi head-twister in its original form, along with a multitude of bonus features to keep the bong-passing going after the final credits.

Rex Reason stars as Dr. Cal Meachem, a nuclear scientist abducted by aliens from the planet Metaluna who want him to aid in developing intergalactic weapons for their war against a race called the Zagons. Our hero will not go along without fight, thereby setting in motion an eye-popping, spine-tingling adventure set in a cosmic landscape overrun with flying saucers, death rays, and the movie’s famous “Metaluna mutant” — a creature that truly goes best with copious intakes of marijuana. 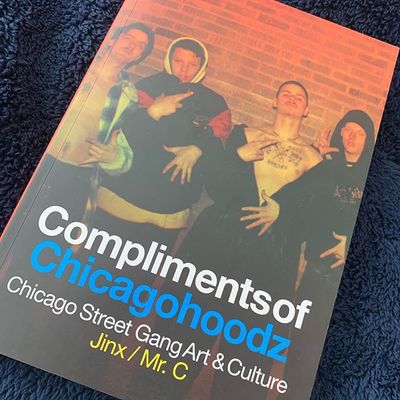 Gangland culture and the drug empires associated with it are endlessly fascinating , in particular because so many details are kept secret for decades. One such example is the practice of creating and distributing gang-identifying business cards among Chicago outlaws that remained a regular practice for more than 50 years.

“Compliment cards,” as these items were called, showcased each gang’s organization and branch along with its active and fallen members, while also, of course, calling out their rivals.

Compliments of Chicagohoodz: Chicago Street Gang Art & Culture collects and displays many such cards, along with other physical gang totems such as patches, drawings, and varsity-style sweaters.

In addition, authors James “Jinx” O’Connor and Damen “Mr. C” Corrado spent decades researching and compiling this material while also interviewing the frontline players about how it all went down.

Complimentz of Chicagohoodz tells the story of each card in dazzling detail, thereby bringing to life the street warriors who created these unique items, added their own personal flourishes as they passed from hand to hand, and ultimately preserved them for this immortal history.

Then you realize that, of course, Chance conquered the universe by way of streaming mixtapes and smash hit singles.

Now, after a ton of tantalizing teases, The Big Day is here in every sense, and it’s everything we’ve all hoped we’d be getting high to and playing nonstop for (at least) the rest of the summer.

Psychedelic synth-pop supergroup Mini Mansions is the cosmically combined comingling of Queens of the Stone Age bassist Michael Shuman, multi-instrumentalist and studio maestro Zach Dawes, and keyboard wizard Tyler Parkford. Guy Walks Into a Bar is billed as the band’s “relationship and breakup album,” so pair it with an inhalable strain that heightens your emotions, and then let these dark-wave adventurers lead the way.

Monomatic
By Mono/Poly
Get It: Bandcamp

As Mono/Poly, LA-based producer and overall electronica mastermind Charles Dickerson creates soundscapes that swirl astral dream flights with glitch trips, bass bombs, and booming hip-hop that envelope the listener in a cloud of cosmic possibilities. Monomatic is Mono/Poly’s latest and, from here, all you have to do is press play and add your own clouds.

MUSIC
TELEVISION
MOVIES
POP CULTURE
MORE...
Mike McPadden
FOLLOW
Mike McPadden is the author of "Heavy Metal Movies" and the upcoming "Last American Virgins." He writes about movies, music, and crime in Chicago. Twitter @mcbeardo
Share this article with your friends!
AD
By using our site you agree to our use of cookies to deliver a better experience.
Accept
Decline
MORE FROM MERRY JANE