CULTURE
Heady Entertainment: Holy Smokes! "The Jesus Rolls" Is a 420-Friendly Blessing
AD
This week, we will find out, once and for all, if truly nobody can fuck with The Jesus. John Turturro's infamous character from "The Big Lebowski" is getting his own spin-off.
Published on February 28, 2020

Welcome back to "Heady Entertainment," MERRY JANE's weekly guide to just-released movies, books, and music — all fresh, dank, and THC-friendly. In specific, we choose our picks based on how they can enhance your combined consumption of cannabis and entertainment.

Sneaking into theaters (like tokes between mouthfuls of popcorn), The Invisible Man is out to haunt Elisabeth Moss to horrifying heights, The Jesus Rolls is a smoking spin-off flick for John Turturro’s character from The Big Lebowski, and Greed re-teams director Michael Winterbottom with UK funnyman Steve Coogan for a savage takedown of billionaire insanity.

Streaming-wise, RuPaul’s Drag Race is back to spread inspiration and ecstasy, the sci-fi skull-jolter Altered Carbon gets a fresh season, and Jason Segal headlines the tricky anthology Dispatches From Elsewhere.

New music made for use with marijuana includes drops from Lil Baby, Caribou, and Wasted Shirt — a hyper-dope new collaboration between Ty Segall and Brian Chippendale of Lightning Bolt.

Greed is the sixth cinematic collaboration between comedic genius Steve Coogan and provocateur filmmaker Michael Winterbottom, a combination that has yielded the drug-drenched rock-‘n’-roll brilliance of 24 Hour Party People (2002) and The Trip film series, which are pure joys to watch with multiple joints. Shot mockumentary-style, Greed is a razor-witted satire regarding the diabolically decadent 60th birthday bacchanal of fashion mogul Sir Richard “Greedy” McReadie (Coogan). The movie offers both huge laughs and food for thought and, once you’re properly stoned, good luck taking your eyes off Coogan’s hilariously nuclear-white teeth.

Elisabeth Moss stars in The Invisible Man as Cecilia, a domestic violence survivor who is convinced her abusive scientist ex-husband Adrian has faked his death and turned invisible to stalk, terrorize, and, ultimately, kill her. Of course, she’s right. The Invisible Man whips up a frenzy of fear you’ll definitely want to pair with your favorite paranoia-inducing pot strain.

In the annals of stoner cinema, 1998's The Big Lebowski smokes among the highest and most holy marijuana masterworks ever made, with John Turturro’s character Jesus Quintana standing out among the film's array of hilariously intoxicating icons. Directed by Turturro and set in the Lebowski-verse, The Jesus Rolls follows the purple-nailed, ball-licking Quintana after he gets sprung from jail, hooks up with his equally perverse pal Petey (Bobby Cannavale), and the pair hit the road in pursuit of illicit kicks. Oh, yes — it’s a trip!

Leaping ahead 250 years from season one — which was already set in the year 2384 — Altered Carbon showcases Anthony Mackie as Takeshi Kovacs, a prisoner (played by Joel Kinnaman on season one) who’s been in suspended animation for centuries, then awakes in pursuit of the truth in a future where anyone’s consciousness can switch bodies, so no concept of reality may be as it appears. Smoke hard, and hang on for the ride.

Jason Segel is both the creator and star of Dispatches From Elsewhere, an anthology series set in Philadelphia where a series of unrelated individuals get entangled in a larger mystery that may ultimately bring them — and possibly all of humanity — together. Or it may not. Inspired by the alternate reality game "Games of Nonchalance" that overtook San Francisco from 2008 to 2011, Dispatches From Elsewhere is an expansive tumble down the rabbit hole of so-called reality, best watched while elevated.

The Day of the Dolphin is an earthbound, seafaring sci-fi adventure with heart, action, the great George C. Scott, and, most smokable of all, talking aquatic mammals as its heroes. Scott plays Dr. Jake Terrell, a scientist who has spent years training a pair of dolphins, Fa and Bea, to speak simple English. Just as the animals finally start talking, a shadowy spy agency steals the animals and aims to use them to assassinate the President of the United States. Dr. Jake rushes to rescue Fa and Bea, and their adventure is both nerve-wracking and heartfelt. The Day of the Dolphin is an eco-fable for the ages, and it looks luminous in the new collector’s edition from Kino Lorber. Light up, and dive deep. 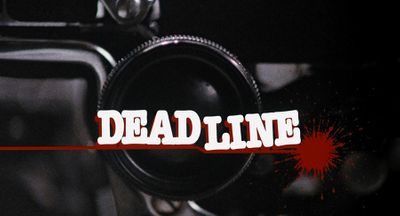 The cult following for the Canadian fright freak-out Deadline has been steadily building for decades, finally resulting this new collector’s Blu-ray from Vinegar Syndrome that will, at last, deliver this madness to the masses.

Stephen Young stars as Steven Lessey, a horror author who becomes unhinged while plumbing his imagination for  increasingly gruesome stories in order to make a living. Spark up and watch Lessey’s descent into derangement, as his sanity slips away and the kill count around him expands with inventive intensity — and even some sinister laughs.

Masked and Anonymous, a one-of-a-kind, alternate-universe fantasy from Borat director Larry Charles, stars no less a lit luminary than Bob Dylan, who also co-wrote the screenplay.  Dylan stars as Jack Fate, an enigmatic singer-songwriter freed from jail to perform a benefit concert for a collapsing America.

Packed with stars that include Jeff Bridges, John Goodman, Penelope Cruz, Angela Basset, Mickey Rourke, Val Kilmer, Bruce Dern, Jessica Lange, and Cheech Marin, Masked and Anonymous is weird, off-putting, hugely compelling, and, somehow, tremendously inspiring. The movie shares that in common with its leading man, who we’re pretty sure would want you puffing pot while you watch it (no matter what, we want you puffing pot, so do it).

Fungus II
By Wasted Shirt
Get It: Bandcamp

Wasted Shirt is the fusion — and combustion — of genre-warping Ty Segall and psychedelic noise-marauder Brian Chippendale of Lightning Bolt. Fungus II, the duo’s skull-smashing debut, is an eruption of hallucinogenic perfection. Get high, and let it grow all over you.

My Turn
By Lil Baby
Get It: Lil Baby Official

2020 already feels like The Year of Lil Baby, and My Turn, his second studio album, makes clear that we may be living and smoking in the Lil Baby Era for some time to come. Guests include Lil Wayne, Future, Young Thug, Lil Uzi Vert, Gunna, 42 Dugg, Moneybagg Yo, and Rylo Rodriguez. Turn on and toke up to My Turn.

Suddenly
By Caribou
Get It: Caribou Official

It’s hard to believe we haven’t lit a spliff to a new Caribou album since Our Love in 2014. At last, Dan Snaith — a.k.a. Caribou himself — is back with Suddenly. And from the LP’s first gently rocking synth notes to its soaring crescendos to its forays into hip-hot beats and pop-rock flourishes, it’s great to get high with this guy and his endlessly surprising music once again.

MUSIC
TELEVISION
MOVIES
WATCH THIS
MORE...
Mike McPadden
FOLLOW
Mike McPadden is the author of "Heavy Metal Movies" and the upcoming "Last American Virgins." He writes about movies, music, and crime in Chicago. Twitter @mcbeardo
Share this article with your friends!
AD
By using our site you agree to our use of cookies to deliver a better experience.
Accept
Decline
MORE FROM MERRY JANE