CULTURE
Heady Entertainment: “Aquaman” Holds His Smoke and 21 Savage Keeps Burning Bright
AD
Christmas looms Tuesday, so let’s all take this long weekend to get properly lit in anticipation of all that merry mayhem and Kringle chaos. Looking for some suggestions? We've got you covered.
Published on December 21, 2018

Christmas looms Tuesday, so let’s all take this long weekend to get properly lit in anticipation of all that merry mayhem and Kringle chaos. After a few dry weeks at the multiplex, theaters are suddenly flooded with mega-movies that go best after a proper marijuana sesh, including the epic adventures Aquaman and Bumblebee, along with the semi-animated weirdness that is Welcome to Marwen.

Except in the realms of Batman and Wonder Woman, the Marvel Cinematic Universe has consistently smoked its DC Comics competition at the movies for years now.

After the last couple of caped crusader flicks with Ben Affleck faltered, DC decided to dive as deep as it could to try to keep up with Marvel and, somehow, scooped up the one superhero that’s long been a laughingstock — the guy who rides a seahorse, talks to fish, and doesn’t seem to be able to do anything special outside of the water.

Hold those guffaws, though, and get ready to spike your popcorn with extra potent edibles, as director James Wan’s mega-budget, mind-blowingly gorgeous-to-look-at Aquaman is a work of genuine wonder that absolutely must be viewed in IMAX 3D for full impact (and, of course, while munching on those THC treats).

Hyper-charismatic Jason Momoa, who debuted as the King of Atlantis in last year’s Justice League, truly convinces at every moment that he’s the reigning god of an entirely different reality that exists below the surface of our oceans. The visual effects are like a full-immersion dream that seamlessly appears to seep off the screen and completely engulfs you in the action. Aquaman is an experience in sensory overwhelm of the highest order, so get yourself in your own highest order and take the plunge.

This is not news: the Transformers movies are loud, explosive, nonstop barrages of CGI special effects and giant robot battle action that are best (maybe even only) enjoy while stoned as they pummel you with sound-and-fury overkill.

It should come as no surprise, then, that Bumblebee, the origin story of the most beloved Transformer who’s not Optimus Prime, also perfectly fits that bill, and it’s an extra blast to experience it on a the biggest screen you can find. Possible spoiler alert: it’s even got Optimus Prime. So what are you waiting for?

Welcome to Marwen is the sort of project that, in description, might make you ask about the Hollywood execs who greenlit it, “What were they smoking?”

Robert Zemeckis, director of Back to the Future (1985) and Forrest Gump (1994), adapted Marwen from a documentary about Mark Hogancamp, an artist who suffered brain damage during a hate crime when a pack of thugs discovered he liked to dress in women’s clothing.

As part of his recovery, Hogancamp built a miniature World War II village called Marwen and populated it with dolls that reflected different aspects of his inner personas, all of which were female. Steve Carell stars as Hogancamp in this high-tech dramatic version of the story, and we see his CG-animated adventures in Marwen amid the dolls who also resemble the real women in the artist’s life.

If all that sounds trippy (as well as touching), it is. So definitely consider the possibility of toking up and taking in what’s definitely the most unusual and unexpected holiday offering from Hollywood this season.

In the rap game, no figure looms more ominous than Death Row Records kingpin Suge Knight. When it comes to urban movie thrillers, no filmmaker wields the power of Antoine Fuqua, director of Training Day (2001) and The Equalizer (2014).

These two titans of their fields meet, face to face, in American Dream/American Knightmare, an up-close documentary that needed to be made. Captured in a series of unflinching jailhouse conversations, Knight opens up to Fuqua to tell all about his rise to unprecedented prominence, his reign of relentless terror, and ultimately the incidents that, at present, have him locked up awaiting trial on murder and attempted-murder.

And through it all, we know full well not to just take Suge’s word for everything that’s happened. American Dream/American Knightmare is not just riveting, it’s terrifyingly compelling. Light up and listen hard as the saga, off-screen, continues to unfold.

Based on the 2014 post-apocalyptic bestseller by Josh Malerman, Netflix’s impressive sci-fi thriller Bird Box follows what happens before, during, and after a catastrophic event that wipes out almost all of humanity.

The culprit is an unknowable entity that eliminates survivors one at a time by forcing anyone who looks at it to face their own deepest, most horrific fears. With an all-star cast and taut direction by Susanne Bier, Bird Box is a hot box of pending doom and overpowering paranoia. Pair it with your favorite wig-out weed and savor the shivers.

Marvel’s Runaways chronicles the action-slammed adventures of six outwardly diverse teenagers — a nerd, a goth, a riot grrl, a jock, an unreasonably strong optimist, and a human-alien hybrid — who find themselves united by a single cause: the defeat and decimation of their own parents, who are all part of a super-villain cabal known collectively as the Pride.

With its focus on youth culture, Runaways packs unique energy and edge, so even though the show is relatively low profile in the Marvel universe, it’s packed with plenty of vibes and visuals that make it fun to get high to.

Ever since it was first published in 1972, author Richard Adams’ allegorical novel Watership Down has been a favorite of high school students who get high and ponder the meaningless and possibilities of existence.

Such cosmic themes are experienced in the book by a group of rabbits that go off in search of a new home after their old stomping ground gets taken over by predators. The book was made into a heavy animated feature film in 1978, and now comes the BBC’s high-tech CGI miniseries that’s been four years in the making.

The four, one-hour episodes of the new Watership Down are beautiful, heartbreaking, thought-provoking, and definitely meant to be paired with a strain that properly enhances all such related reactions.

During the early ’80s slasher movie craze, horror villains came in the form of small town stalkers (Halloween), summer camp slayers (Friday the 13th) and even dream demons (A Nightmare on Elm Street). Bloody Birthday, however, pushed the popular joint-passing genre into weird, paranoia-inducing territory by making its homicidal heavies turn out to be a pack of little kids.

That’s right. Pack your pipe, fire it up, and watch this vintage hair-raiser in red-eyed wonder as otherwise adorable-looking children massacre everybody in the local community with blades, bullets, bludgeoning, and even a lethal application of birthday cake.

While he never outwardly declared his love of weed like Cheech and Chong, or even directly addressed drugs the way Saturday Night Live did early on, the surrealistic stand-up and absurdist albums of Steve Martin reigned during the 1970s as deliriously dope high points in pop culture.

With The Jerk, Steve perfectly translated his brilliantly stupid/stupidly brilliant “wild and crazy guy” schtick to the big screen as Navin Johnson. He’s a world-class idiot who grows up on a farm, joins a carnival, eludes a mad assassin, accidentally makes a fortune with a dumb invention, and then loses it all. Along the way, the movie introduces enduring points of hilarity such as Shithead the dog, a villain named “Iron Balls McGinty,” and other gags guaranteed to get you choke-laughing helplessly on your bong smoke. Inhale with caution! 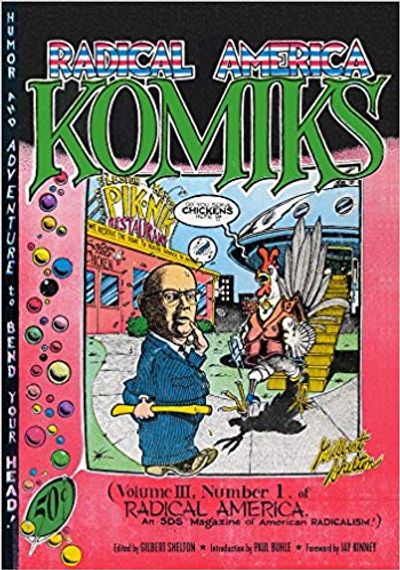 From the frontlines of when American youth first tapped into the power of pot to liberate themselves and society alike, Radical America Komiks collects vintage underground artwork by the incendiary hippie-era artists who invented the very art form — and that includes making sure to always be properly dosed while doing it. Radical America was a political journal connected to the globally-controversial group Students for a Democratic Society (SDS).

The C.I.A., the self-titled debut from cutting-edge psych-rock hero Ty Segall’s new freak-out foursome, showcases Ty’s wife, Denée Segall, on vocals, Emmett Kelly of Cairo Gang on bass, R.E. Carlos on drums, and Ty himself also bombing the bass and whipping the chaos into hallucinatory but hugely-consumable cohesion. You know what goes best with this C.I.A.? Some primo-grade P.O.T.!

As one of the hardest working multi-talents in contemporary hip-hop, New York slayer A Boogie Wit Da Hoodie typically has so many projects in the pipe (pun most definitely intended) that it can be tough to guess which one’s going to drop first.

Hardly resting on the laurels of his recent Grammy nominations (for “Rockstar” with Post Malone), Atlanta sensation 21 Savage scorches and soars to new highs on his sophomore album in a manner that more than backs up the LP’s title, I AM > I Was.

Heralded by a tie-in art show and an entire line of fashion items, Savage kicks it gangster on much of I AM, hitting hard and smoking the doubters. The collaborator list reads like a roll call of current rap giants: J.Cole, Childish Gambino, Schoolboy Q, Lil Baby, Gunna, Offset, and, for better or worse, Post Malone.

420
MUSIC
TELEVISION
HOLIDAY
MORE...
Mike McPadden
FOLLOW
Mike McPadden is the author of "Heavy Metal Movies" and the upcoming "Last American Virgins." He writes about movies, music, and crime in Chicago. Twitter @mcbeardo
Share this article with your friends!
AD
By using our site you agree to our use of cookies to deliver a better experience.
Accept
Decline
MORE FROM MERRY JANE