To celebrate Canadian cannabis legalization week, this edition of Heady Entertainment is focused entirely on nug-ready confections from the Great White North.

Canada-rooted movies to stream while smoking include the documentary The Culture High, the classic Canuck farce Strange Brew, the recent and riotous Super Troopers 2, and the pointedly thematic laugh riot, Trailer Park Boys: Don’t Legalize It.

You can also toke in your toque to collector’s editions of Dan Aykroyd’s Dragnet, David Cronenberg’s Rabid, and a Neil Young double feature of Rust Never Sleeps and Human Highway.

In maple leaf music, marijuana-informed sounds come from rapper Nav, DJ Rezz, and stoner rockers Cleõphüzz. So let’s get straight — but not “straight” — to this week’s fresh-rolled recommendations.

Vancouver-based director Brett Harvey documented North America’s insane anti-marijuana laws in the acclaimed documentary The Union: The Business of Getting High (2007). Seven years later, Harvey’s Canadian team followed up with The Culture High, a look at how pot prohibition had evolved in the seven years since the first film. Now, just about a half-decade later, weed is legal in the filmmaker’s homeland. In light of what’s happening in terms of being allowed to get lit, we’re eager to see (and smoke along with) whatever Harvey comes up with next.

On the landmark Toronto-launched sketch comedy series SCTV, funnymen Rick Moranis and Dave Thomas invented their “hosehead” brother characters Bob and Doug McKenzie to satisfy a government requirement that the show include “distinctly Canadian” content. The McKenzies are a spoof of backwoods Canadian stereotypes who worship hockey, snarf donuts, and never for one second stop pounding Molsons.

Strange Brew is the goofball brothers’ big-screen adventure in which they take on Max Von Sydow as an evil brewmaster out to enslave the world through mind-controlling beer.

That was back in the ’80s; today, Bob and Doug would no doubt be equally as prolific in honoring their homeland’s newly-legalized intoxicant, too. So pop a cold one between each hot hit of weed and laugh along at Strange Brew’s deliriously high style.

The zonked cops of Super Troopers, the 2001 stoner comedy favorite starring sketch group Broken Lizard, get transferred to Canada for a hugely hilarious sequel. In addition to their standard personality disorders, the Troopers contend here with a number of specifically Canadian archetypes, including Rob Lowe as Guy Le Franc, a hockey player turned rural town mayor, Emmanuelle Chriqui as a French-speaking cultural ambassador, and a trio of burly Mounties led by Mad TV cut-up Will Sasso. The fact that Super Troopers 2 intentionally opened in theaters on 4/20 this year says everything else you need to know about it.

Based on the essential Canadian mockumentary to watch while wasted, Trailer Park Boys: Don’t Legalize It is the third and final installment of the empty-headed heroes’ big-screen trilogy — and, for smokers, they saved the best for last. Ricky (Robb Wells), Julian (John Paul Tremblay), and Bubbles (Mike Smith) seem to have finally found their ticket out of the trailer park after Steve inherits a house that comes with a major marijuana growing operation. The only issue is that, even back in 2014, the momentum to end pot prohibition in Canada had reached such a point that the boys panic and pledge to do whatever they can to protect their racket by keeping reefer an outlaw crop.

Don’t Legalize It, then, is an uproarious farce about stoners battling against stoner liberation that, in real life, led to the ultimately happy ending — at least for those watching the movie, if not the Trailer Park Boys themselves.

Toronto-born rock god and outspoken marijuana advocate Neil Young directed two films, and each one is an experience every stoner must have (naturally, of course, while stoned).

The first is the brilliant concert documentary Rust Never Sleeps, a two-part epic performance that mirrors Young’s 1978 album of the same name. It begins with a solo acoustic set and is followed by garage rock geniuses Crazy Horse, who back Neil on a thunderous run-through of the very anthems that largely invented grunge rock (“Sedan Delivery,” “Powderfinger,” “Cortez the Killer,” and the monumental “Hey Hey, My My”).

Human Highway is Young’s wild idea of a comedy, a surrealistic neo-atomic-age freak-out that features Devo playing nuclear plant workers who glow. There’s also a crew of small town weirdos facing the apocalypse, played by many of the same actors that David Lynch would later hire to populate his ’80s masterworks — such as Dennis Hopper, Dean Stockwell, and Diane Ladd. Get both movies bundled together on Blu-ray, get lit, and stay forever Young!

Rabid established Canadian visionary David Cronenberg as the all-time master of body horror whose milestones such as The Fly, The Brood, and Videodrome stand high among the most toke-worthy terror exercises of all time.

Adult film actress Marilyn Chambers stars in Rabid as a Quebec woman who comes out of surgery with a taste for human blood and a retractable appendage under her arm that she uses to drain the red stuff out her victims.

In short order, everyone Chambers feeds from becomes a crazed zombie, with the infection spreading into Montreal and, from there, possibly, the world. Pick a paranoia-inducing strain to ingest while watching, and then just let Rabid take you down. 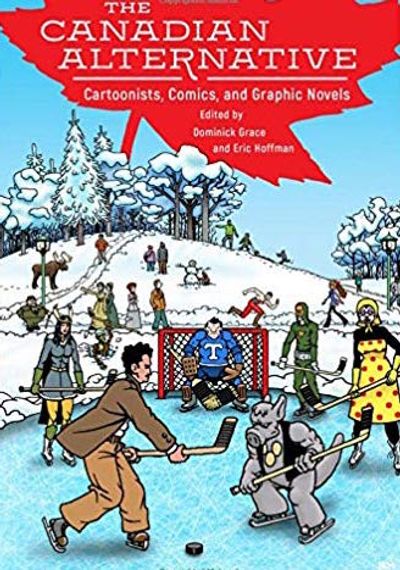 “The Canadian Alternative: Cartoonists, Comics, and Graphic Novels”
By Dominic Grace and Eric Hoffman
Get It: Amazon

Underground comix have been intertwined with cannabis culture from the beginning, starting with hippie highs of Robert Crumb and The Fabulous Furry Freak Brothers, and carrying on to the frantic antics today of Johnny Ryan and Ed Piskor’s Hip-Hop Family Tree. The focus, however, too often falls on U.S. artists.

The Canadian Alternative is a massive, must-have compendium that corrects that oversight by showcasing the entire history of Canuck cartooning, from newspaper strips and superhero adventures, up through the alt-comix brilliance of Chester Brown, to the groundbreaking web comic Hark! A Vagrant by Kate Beaton — and beyond.

“A Certain Kind of Magic”
By Rezz
Get It: iTunes

Dope beats, smoking dance grooves, and emo-inspired melodies make good on the title of A Certain Kind of Magic, the latest LP from Niagara Falls’ most dynamic young DJ and producer, Rezz. The album detonates from track one, “Witching Hour,” a spellbinding web of basslines and unexpected left turns that will spin your very being. From there, the Magic only takes fuller flight, particularly on “Life and Death,” a collaboration with Dethpact, and “Teleportal,” a rocket ride where Rezz is accompanied by Kotek.

“Reckless”
By Nav
Get It: SoundCloud

Fans have long clamored for the studio debut from Nav, a Toronto-based rapper born to Indian immigrants whose been making big sounds worldwide. The album’s first single, “Wanted You,” featuring Lil Uzi Vert, dropped nearly a whole year ago, and it’s dope to announce the wait has been worth it. Pack your weed, spark up, and press play. Reckless also features guest shots by Travis Scott, Quavo, and Gunna, and it earns extra Canadian points for sharing a name with one of the all-time best-selling north-of-the-border rock albums, 1984’s Reckless by Bryan Adams.

“A Wizard of Phuzz”
By Cleõphüzz
Get It: Bandcamp

Cleõphüzz is a five-piece, female-fronted heavy-psych squad that hails from a Canadian region whose name alone sounds like a stoner metal invention: Témiscamingue. Rest assured, though, and roll yourself a Sasquatch-sized fatty, because just as that’s a real place up north, Cleõphüzz is the real deal when it comes to bombarding brains with tripped-out sludge and high-flying feats of hallucinatory rock-‘n’-roll abandon. Trip the Phuzz fantastic!

420
MUSIC
ENTERTAINMENT
MOVIES
MORE...
Mike McPadden
FOLLOW
Mike McPadden is the author of "Heavy Metal Movies" and the upcoming "Last American Virgins." He writes about movies, music, and crime in Chicago. Twitter @mcbeardo
Share this article with your friends!
AD
By using our site you agree to our use of cookies to deliver a better experience.
Accept
Decline
MORE FROM MERRY JANE