It’s a dope weekend for those for who like to mix their intoxicants with intensity, as Kin blasts off on the big screen, Jack Ryan rocks Amazon Prime, and Ozark returns to Netflix. For cult-flick collectors, the special edition of Strait Jacket is a head-chopping howler, while Weed Wolf is a funny fright film made expressly to be watched with marijuana.

Music-wise, Don Q drops a dank mixtape, Curren$y fires up a new instant-favorite, and psych-rockers Black Mirrors go deliriously dark. So let’s get straight — but not “straight” to this week’s fresh-rolled recommendations.

The couple’s relationship runs amuck when Annie comes across an ultra-rare Crowe recording, which leads them to meet the elusive star — who immediately hits on the girlfriend of his #1 fan. Juliet, Naked is a sweet, smart, and laid back, so pick the weed strain that matches that mood for your pre-movie smoke-up.

With music by prog-metal mind-bangers Mogwai, the IMAX 3D sci-fi epic Kin is a blazing assault on the senses boosted by provocative concepts and trippy twists on YA action formulas.

In neon-scorched (but burnt-out) future Detroit, teenage Eli discovers a biotech ray gun left behind by space aliens — and those interplanetary executioners want their weapon back. With his ex-con brother Jimmy (Jack Reynor) also on the run from a psycho mob boss, the siblings hook up with bad-ass dancer Milly (Zoe Kravtiz) and hit the road for high (in the best sense) adventures.

Paranoia-loving potheads, light up! The Little Stranger is a gothic ghost story set in 1947. Domhnall Gleeson stars as Dr. Faraday, a physician who attends to the Ayres of Hundreds Hall, a crumbling mansion where his mother once worked as a housemaid. Of course, the Ayres are not alone there, as spirits of the departed make themselves known in a manner most spookily pleasing to marijuana-enhanced audiences.

As usual, Jack Ryan himself has to save the world from an apocalyptic terror threat with a doomsday clock ticking hard and an entire planet of potential suspects to run down. For those who like to roll a fatty before boarding a rollercoaster, here’s your new favorite series.

Last summer’s breakout Netflix drug drama Ozark returns for another round of suspense that pairs extremely potently with pot. After financial manager Marty Byrde (Jason Bateman) cheats a Mexican drug ring and relocates his wife and kids to rural Missouri, the cartel’s overlord orders him to figure out a way to launder $500 million as soon as possible — or his family will face fatal consequences.

The cash-cleaning scheme leads Marty to getting involved with backwoods crime families, and sets Ozark spinning into one compellingly tense situation after another. Add cannabis, and have fun trying not to freak out.

Fading Hollywood legend Joan Crawford lights up Straight Jacket with a screaming, thrashing, gleefully blood-thirsty performance far more entertainingly insane than anything in Mommie Dearest (1981). Joan plays a primed-to-snap wife who catches her husband in bed with another woman, axes them both to death, then does 20 years in an institution. Once she gets out, heads roll anew. It’s one of the best and craziest from gimmick-happy horror maven William Castle.

Weed Wolf is exactly what horror fans who get high hope it is: a pot-driven lycanthrope scare-fest spiked with howlingly ridiculous humor. In party-hearty Normal, Texas, the perpetually wasted residents come under attack from the titular beast — a werewolf with a voracious appetite for stoners. It’s then up to hippie chick Mary Jane (Kaitlyn Colunga) to team up with Grass County Sheriff Hardwood (E. Lee Smith) to hunt the Weed Wolf in a town full of drunks, nymphomaniacs, survivalists, and even a smoke-happy Sasquatch. 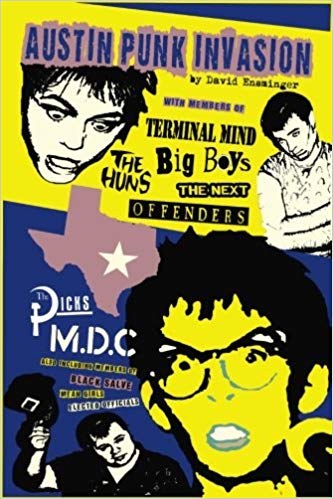 “Austin Punk Invasion”
By David Ensminger
Get It: Quimby’s Bookstore

Austin, Texas prides itself on being weird, and a sizable dose off that sunbaked strangeness has always wafted up off the city’s hard rock scene, dating back to the psychedelic proto-freak-metal of Roky Erickson and on through the acid-blasted Armageddon of the Butthole Surfers.

Austin Punk Invasion chronicles the first wave of Lone Star State mohawk-and-safety-pin madness, with profiles of essential players such as The Dicks, The Hickoids, Bang Gang, The Next, and The Offenders. As a result, Austin Punk Invasion offers a perfect stage dive into the mosh-pit where mushrooms, mescaline, and mezcal meet radically brash and boundlessly inventive music.

“Fire in the Clouds”
By Curren$y
Get It: iTunes

With Fire in the Clouds, NOLA’s own prolific rapper, puffer, and passer Curren$y mixes weed-inspired visions of the apocalypse with an easy-hustling rhyme delivery to create a laid-back meditation on modern times enshrouded in smoky enlightenment. Put some fire in your lungs and cruise through the Clouds with him.

When it comes to mushroom-cloud psychedelia, garage-punk, and narco-doom, Black Mirrors brings it on with acid and smoke galore. Indulge in the most powerful intoxicant at hand, and do as the title suggests — Look Into the Black Mirror — for an electric array of explorations in that mystical space smack between head-feeding and headbanging.