CULTURE
“Have A Good Trip” Is a Hilarious Doc on Psychedelics That We All Need Right Now
AD
The Netflix release features stories about tripping from A-listers, including Sting, Ben Stiller, and the late Anthony Bourdain. “I’m an advocate for rational conversations about things that might make us nervous as a society,” explained director Donick Cary.
Published on May 22, 2020

Photos courtesy of Netflix / "Have a Good Trip"

Can trees talk? What should you know when taking psychedelics? Are they a legitimate treatment for depression? These equally important questions are tackled in Donick Cary’s Have A Good Trip, a Netflix documentary featuring stories about tripping from A-list actors, comedians, and musicians. Carey, the former lead writer for The Late Night Show with David Letterman and co-executive producer for The Simpsons, breathes life into the weird and enlightening elements of psychedelic experiences through animation and reenactment, which is just as ridiculous and hilarious as it sounds.

And what better way to permeate the stronghold of the anti-drug mindset within the US? In a nutshell, the doc functions as a pro-psychedelics PSA. It’s an antidote to DARE, and illustrates that you can take psychedelics, have mind-sloshing experiences, and still maintain a wildly successful career. It pokes fun at “Just Say No”-era programming, which essentially is an extension of Reefer Madness. The doc also touches on the positive impacts that psychedelics can have on our mental health. But, most importantly, it also expresses that these substances aren’t for everyone.

The best element of Have A Good Trip is the number of posthumous drug tales it features. The late, great Carrie Fisher reminisces about the days she used to travel to specific locations around the world just to drop acid. She also tells viewers about the time she had a surreal moment with an acorn in Central Park, and later intimately states that “psychedelics shaped everything” in her life.

Anthony Bourdain also details his wildest moment on LSD. I won’t spoil exactly what happens, but let’s just say the experience was inspired by Hunter S. Thompson and involved “exotic dancers,” acid, a motel, quaaludes — and a momentary flatline.

Even comedian Fred Willard, who died last weekend, makes a cameo in the film (RIP, man). And although Ben Stiller is still very much alive, he shares a story about his father, Jerry, who also sadly passed away this month. 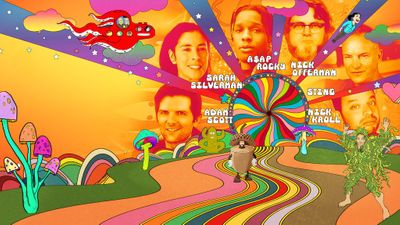 I bring this up because there really isn’t anything more psychedelic than pondering the concepts of mortality and existence. Have A Good Trip offers visual stories from those on this mortal coil and otherwise, emphasizing the idea that birth and death are on opposite sides of the same spectrum. Life (and drugs) is what happens in the middle. .

MERRY JANE caught up with Donick Carey to talk about the doc and how it came to fruition. Have a Good Trip is out now on Netflix, so read the interview, queue up the stream, and let your mind wander into the cosmic abyss. Enjoy!

*This interview has been edited for clarity. 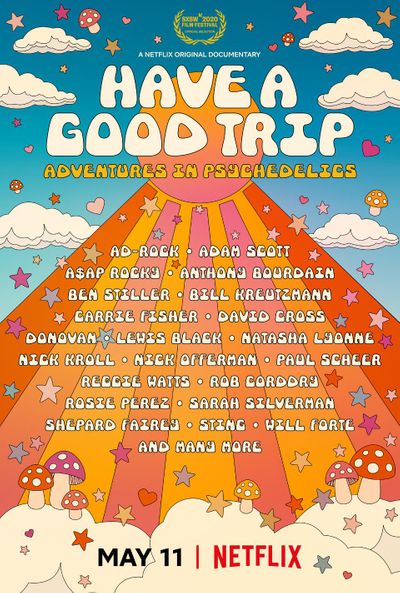 MERRY JANE: Using real life stories from people we all know and (on some level) can relate to is a brilliant way of normalizing the use of psychedelics — and getting people to listen. How did you choose which celebrities and stories to highlight??

Donick Carey: We asked everyone we could get to! Ultimately, we interviewed 75 people for this. It was important, we thought, to include a variety of voices and experiences! We spent a lot of time figuring out the right mix of stories — some cautionary, some revelatory, and some just funny.

There were a lot of important messages disseminated throughout the film, particularly from Deepak Chopra regarding reality. Knowing that everyone’s perception of reality is different, what do you hope Have A Good Trip leaves people with?

I love the context and insight Deepak shares: “Knowing that we created this collective reality is very empowering. Since we created it, it means we have the ability to change it.” I love that. I think his point about exploring a variety of point-of-views we can look at the world through — an insect’s eye, a bat, a bee, etc., is one of the big lessons here. If we can learn to see through each other’s eyes more, we will learn to treat each other and the planet better. We’re all connected, or, as Sting says, “made of the same stuff.” So, practice empathy! Another way of saying “love is all you need” is by treating others the way you want to be treated. 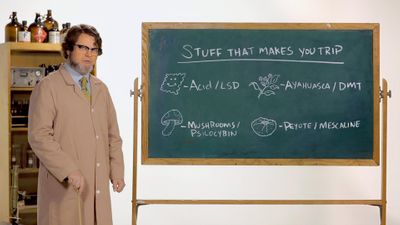 The psychedelic experience can be equally hilarious, inspiring, and horrifying — sometimes all three at the same time. They are not for everyone, but at the same time, almost all psychonauts believe that everyone should trip at least once. Or, if everyone in the world tripped, it would be a better place. Can you go into your process of conveying both of these messages? Which do you tend to lean toward?

I hope part of the message from this is that psychedelics are powerful stuff. When looked at as a medicine or as a tool for learning and healing and used with care, they can be transformative —  for some people — but not everyone. They are not good for all brains, and I think it helps the conversation to remind people that no one has to do these drugs! But, why not explore what they can do for the people they can help?

I wouldn’t advocate for everyone to take them — or to do anything, for that matter. I mean, I loved the movie The Lobster, but it’s not for everyone. I love Cuban pork soaked in garlic and lemon, but I’m not gonna tell my vegan friends about that. I know some devout Christians, but that stuff scares me and isn’t good for my brain, so I politely pass. I’m an advocate for educating yourself, getting to know yourself and your brain — figuring out what is good for you and what you need to be a moral person and what you need to make sense out of this crazy planet and the time you are gonna spend on it. First stop: Books! You can read so much about the psychedelic experience from those who have ventured before us all — from Huxley and Burroughs to Hunter S. Thompson and Electric Kool Aid, and Michael Pollan and Ayelet Waldman.

I’m also an advocate for letting others do their thing, and for rational conversations about things that might make us nervous as a society. Sharing our truths and our realities. I hope the movie is a way to hear real people sharing real stories — and sharing some real facts and truth, even if some of those facts and stories are silly or weird or funny.

The ‘80s anti-drug PSAs throughout the film are classic and hilarious, but also a bummer knowing how much damage they did to the collective’s approach to and understanding of drugs — not to mention how that mentality eventually led to the arrests of thousands of non-violent drug offenders. It’s clear Have A Good Trip presents a new narrative. What is your advice to those hoping to contribute to the new narrative around psychedelics and the associated movement?

Those were a way to shoot something we thought was funny. But, yes, also really acknowledge and point out this attitude that’s been pervasive for 40-50 years, that these drugs are only dangerous and scary and illicit, which just isn’t the reality when considered rationally.

I grew up in Reagan’s “Just Say No” America and the War on Drugs. All this stuff was lumped together, and scaring people was the rule of the day. Sex gave you AIDS, and drugs made you jump out of windows. Anyway, luckily, we seem to be entering a much more sane era of conversation in this space. Sadly, I think it’s partly because we are running out of ideas and time as humans on this planet. We don’t talk to each other, or more importantly, listen to each other. The planet is going down in a ball of fire, and the mental health crisis and addiction rates are putting us all in a state of constant existential angst. So, we need to “zoom out” (to quote Reggie Watts) and “think outside the box” (to quote Sting). We need help wherever we can get it!

My advice for those hoping to contribute and ease this conversation into the mainstream is to lean into the therapeutic uses with facilitators treating the big stuff — depression, anxiety, addiction!  So much good work to do here for people who need help! Don’t stop people from getting better. 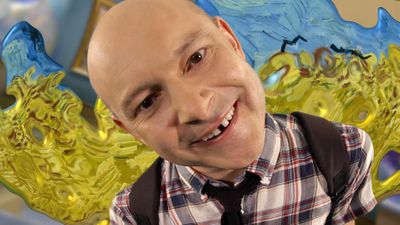 Finally, what is your most pivotal psychedelic experience to date?

Making this doc! I’m only sort of kidding. But, it was “trippy” getting into the heads of all these people. I would say that if you fully commit to anything and give it your whole attention and focus, you can have a meaningful, life-changing “psychedelic” experience  listening to music or meditating or really loving someone or writing in your journal or watching a good movie — JUST FULLY DOING IT! We forget to just do one thing.

Travel has always been psychedelic for me. Flipping your brain around and experiencing a new culture and sharing life with people somewhere you had never imagined before. I will say that I’ve been deep in the Amazon and was visited by a smiling armadillo.  We had a lot of laughs, and they let me know that it’s “OK — I understand.” So, that was a relief. It all defies words. Hard to describe, right?

It’s like that profound understanding feeling you get, you know — the one when you suddenly feel like you just get it, whether it's a joke that makes you laugh harder than you've ever laughed (like some deep-rooted universal cosmic joke passed down from cavemen times about the absurdity of human existence, and suddenly you understand the punchline!) or the bigger just getting "IT,”  like all of it, all at once. You know, when you suddenly understand the way the universe is wired and how humans are part of that wiring.

When you embody the understanding that connection is fueled by love and understanding and empathy, and you realize how amazing it is that all this understanding exists right here in our brain, but we barely ever feel it. It’s crazy that it can suddenly be accessed with hallucinogens! Why aren’t we using them more if they’re there!? Like, maybe we are supposed to be evolving towards them and opening those pathways.

Understanding is in there waiting for us —  if we could just spend time massaging open those pathways, if we could just stop and focus for, like, two or three generations. Unfortunately, there is so much to binge, and so much click-bait to click, and so many live streams, and TikToks to watch. Maybe our kids will figure it out. Ha! Get to work kids!

"Have a Good Trip" is now available on Netflix. Watch the doc here!

INTERVIEW
CELEBRITIES
DOCUMENTARY
MAGIC MUSHROOMS
MORE...
Mary Carreon
FOLLOW
Mary Carreon is an award-winning journalist from Southern California and the Associate Editor at MERRY JANE. She’s drawn to stories about cannabis and the environment, social equity, veterans, the history of weed in California, and the rise of psychedelics and plant medicine in the 21st century. You can find her bylines in KCRW, Billboard, DoubleBlind Magazine, Forbes, CA Leaf Magazine, Kitchen Toke Magazine, OC Weekly, (the OG) LA Weekly, High Times Magazine, and more. Mary loves green juice, coffee, and red wine equally — but not at the same time. When she’s not reporting, you can find her doing yoga to Ravi Shankar, or migrating towards the nearest venue playing the best music. Follow Mary on social media @maryyyprankster or visit her at marycarreon.com
Share this article with your friends!
AD
By using our site you agree to our use of cookies to deliver a better experience.
Accept
Decline
MORE FROM MERRY JANE