CULTURE
'Great Moments in Weed History': The Best Pot Education You Can't Get in School
AD
Podcasts about cannabis are a dime a dozen these days. But two long-time weed journalists are schooling OGs and rookies alike with season two of their THC-infused talk show.
Published on September 12, 2019

The history of cannabis has been muddied by nearly a century of prohibition. But one podcast aims to educate the public on this plant’s rich and wild history, which has intersected with global politics, pop culture, music, art, and medicine since humans first started cultivating it thousands of years ago.

The podcast, Great Moments in Weed History, was started last year by Abdullah Saeed and David “Bean” Bienenstock, two cannabis journalists who were writing about weed years before it became a mass-media darling.

You may recognize those two names. Saeed currently writes for and stars in HBO’s cannabis comedy High Maintenance. He’s also known for creating the VICE series Bong Appetit, which follows celebrities and weed influencers as they cook infused meals then get lit AF on their own dishes. Bean, on the other hand, literally wrote the book on getting lit, How to Smoke Pot (Properly): A Highbrow Guide to Getting High. He was also an editor at High Times during the publication’s heyday. We consider both toking titans to be MERRY JANE fam.

Whereas most media companies have obsessively tracked every bit of breaking news related to weed (and we at MERRY JANE are no exception), Great Moments in Weed History harkens further back in time, trudging up old but fascinating tales about our favorite plant, our most iconic activists, and how weed has forever altered the course of humanity’s scientific, cultural, and political developments. 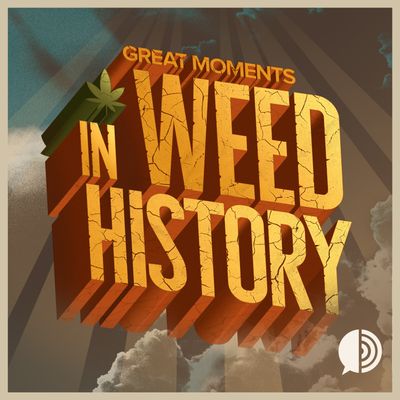 In the first season, we’re introduced to the European anarchists who made Amsterdam the world’s weed tourism spot, as well as the folk legend who converted The Beatles from straight-laced Brit rockers into a gaggle of ganja-toking hippies. And since Saeed has no foreknowledge of the topics before the duo record each episode, he ends up serving as the perfect comedic foil to Bean’s armchair historian.

As the podcast blazes into its second season, expect even more weird, insightful, and shocking tidbits from the world of weed history: an exploration into Obama’s time as Commander in Chiefing through the lens of his bong-hitting college crew, how Louis Armstrong’s pot dealer became a slang word for weed, and that time two tokers got weed decriminalized in Philadelphia by defiantly lighting up in front of the Liberty Bell – just to list a few topics.

To find out more about what’s in store for Great Moments in Weed History, MERRY JANE reached out to Saeed and Bean by email to find out why they feel now, more than ever, we need to be aware of cannabis’s history and our millennia-long relationship with this life-saving plant.

MERRY JANE: What's the story behind how you two conceived this podcast?

Abdullah Saeed: Bean and I had both recently left our jobs at major weed media outlets and felt it was time to make a show on our own terms. So, we smoked a few joints and kicked around some ideas. Great Moments in Weed History felt like the best way to encapsulate true weed culture in this moment and throughout time, and the breadth of cannabis history going back thousands of years provides an endless supply of stories to pull from.

David “Bean” Bienenstock: We've been really honored and inspired by the way the cannabis community has embraced the show from the very first episode, and then we got some great reviews too — including from the Los Angeles Times.

In each episode I research and write the story — whether it's Willie Nelson Smoked a Joint on the Roof of the White House; Napoleon Invaded Egypt And That's How Hashish Got to Europe; or Maya Angelou's Life Transformed the First Time She Got High — and then when we sit down to record Abdullah, who has no idea what the subject will be. That keeps us both really in the moment, and I think it's reflective of our real relationship as close friends and fellow cannabis enthusiasts/history buffs. One of the.best comments we get from listeners is that they feel like they're blazing and laughing and learning right along with us, and I think it stems from having a really interesting story to tell instead of just asking each other what our favorite strain is.

History is being made every single day in terms of cannabis reform. Why did you decide to highlight these past moments from iconic cannabis figures, some of which took place decades ago?

Abdullah: Because the current era of cannabis that revolves around policy in the US is just the tip of the iceberg. There are so many amazing stories from the 10,000-plus years of cannabis history. And so many historic figures have amazing cannabis stories, from Napoleon to Jesus Christ. In the history books, these stories are glossed over at best and stricken out at worst. If we don't document this stuff, who will?

Bean: Also, the history of cannabis teaches us important lessons about authoritarianism and resistance, about government propaganda, cultural upheaval, racism, and the establishment's total lack of legitimacy. As a society, we really need to ask ourselves how we ended up waging a 100-year-long war against a beneficial plant. Also, even within these stories, there's a lot of humor to be found, whether that's Cheech and Chong making Up in Smoke or the musician Fela Kuti having to hide his feces from the Nigerian police because they wanted to search it for half-digested weed.

Your podcast operates "free of corporate control." Why was it important to independently produce this show?

Abdullah: Major media companies are only as interested in cannabis as the amount of views/traffic/money it can get them. And they're very slow to understand that cannabis people are highly aware of being pandered to. We really care about cannabis and the culture around it and the people involved in that culture, and it reflects in this show. Having established that in our first season, we were stoked to find a partner in Spoke Media for our second season. They recognized the authenticity of our show and have helped us make it so much better without sacrificing any of the heart and style of our first season. This season, our production value is significantly higher, we've got archival clips, music, a new logo — the works — all in service of enhancing our original concept.

Bean: We didn't even have sponsors or ads on the first season, because we were so focused on trying to make the best show possible and share it with this community (and beyond). We recorded in our apartments and handled every other aspect of the show ourselves, so it was a real labor of love. At the time, we could only hope that enough people would like it so that we could figure out a way to do a second season. Thankfully, people did dig the show in appreciable numbers. And then Spoke Media discovered us and decided to provide enough resources to make this the show of our dreams. I'm proud of all our episodes, but if you're new to the podcast, definitely check out something from Season 2 first.

Speaking of the second season, how does this season compare to the first?

Abdullah: In Season 2 of Great Moments in Weed History, we're playing with the format a bit more. Coming up this season, we have a two-part episode about the founder of High Times magazine. We have guests — one of whom is the artist Jesushands who changed the Hollywood sign to say Hollyweed. Bean and I switched seats for an episode, where I told him about a great moment that he didn’t know about. And everything is professionally recorded, edited, and mixed. Other than that, it's the same hash.

Bean: Having more support behind the podcast allows me to dig even deeper into cannabis history when identifying and researching these incredible stories.

What's the wildest thing you've learned about weed history since you started this podcast?

Abdullah: The fact that Jesus Christ has a very plausible cannabis story is one of the most awesome things I've ever learned about this plant.

Bean: I thought I knew the story of Dennis Peron and Brownie Mary, two incredible cannabis activists who suffered arrests and police raids because they supplied medical cannabis for free to AIDS patients. But when I dug into the details, I was torn apart by how incredibly brave and selfless they were in the face of police brutality and rampant homophobia.

If you had to pick just one figure from weed history as the most influential, who would it be? And why?

Abdullah: I would say Hernan Cortes, who first brought hemp to the western hemisphere in 1519. It set cannabis on its path to today.

Bean: Not to be corny, but while there's definitely many heroes in the cannabis community, I'm going to have to give this one to the plant herself.

If you had to pick a favorite figure, who would it be, and why?

Abdullah: Cortes is certainly not my favorite. In terms of someone I actually like from weed history, Carl Sagan's reverence for cannabis comes to mind. Maybe mythical ancient Chinese emperor Shen Nung.

Bean: I really love the story of the Provos, an anarchistic political movement in the Netherlands that made that country a world leader on cannabis. More people should know that you can accomplish a lot by subverting the "despicable plastic people" who currently run the world, and have tons of fun doing it.

Based on your historical analyses, where do you foresee the legalization movement going in the next few years? The industry? Weed activism as a whole?

Abdullah: At the risk of dodging an essay question, I'll say this: History shows us that once there's legal money involved, things don't get less corporate. And people are still out there getting arrested for weed, and they're still mostly black and brown. Was it worth fighting for legalization if this is what it looks like? Nobody's sure, but it will probably keep the activists busy for a good long time.

Bean: The future is what we make it. Which is why I think it's so important to know our own history as a movement. And to share that example with others fighting against oppression.

To drop in on Great Moments in Weed History, check out their website. You can also support the podcast by donating to the program at Patreon.

INTERVIEW
HISTORY
CULTURE
POP CULTURE
MORE...
Randy Robinson
FOLLOW
Based in Denver, Randy studied cannabinoid science while getting a degree in molecular biology at the University of Colorado. When not writing about cannabis, science, politics, or LGBT issues, they can be found exploring nature somewhere in the Rocky Mountains. Catch Randy on Twitter and Instagram @randieseljay
Share this article with your friends!
AD
By using our site you agree to our use of cookies to deliver a better experience.
Accept
Decline
MORE FROM MERRY JANE