CULTURE
Get Familiar with the Steam Chalice, Jamaica’s Most Sacred Smoking Device
AD
What exactly is a "steam chalice" and how do you use the Rastafarian smoking device?
Published on May 14, 2019

Recently, while on a trip to Jamaica, I went dancing at a dub club. Ganja smoke filled the outdoor party as casually as clouds. I was transfixed by a Rastafarian who was smoking out of what looked like a pipe made out of a coconut with a long bamboo stick attached to it. In between songs, he’d pause to prepare the device. Later in the night, I met a man named Peter, who also had one, and let me try it. It wasn’t smoke that the device produced, but vapor. It was the smoothest hit of herb I ever took. I later found out this contraption was called the “steam chalice,” and it became omnipresent during the rest of my week in Jamaica, thanks to my local friends. And it turns out the device is a sacred part of Jamaican culture, with its own unique history.

“The steam chalice, a Jamaican invention, is a more organic and safer way to get the essence of the herb, with minimal amount of the toxic byproducts associated with direct fire placed on the herb,” my friend and Rastafarian Jamaican native Ah-Tesphaye Fatari told me. “Health is wealth, so let’s enjoy the herbs in a more ital [natural] way,” Fatari said. 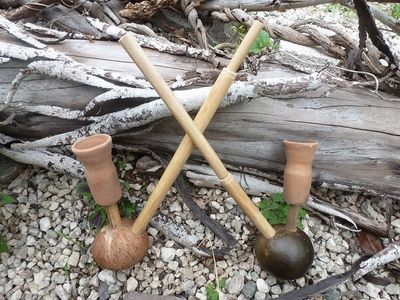 “Ital” is a Jamaican expression which means natural, and is used to describe everything from organically grown cannabis to local, healthy food. A steam chalice is made from ceramic parts, bamboo, and calabash or coconut pieces. The hollowed-out coconut or calabash is filled with water, or ideally natural coconut water. A bamboo rod is attached to the coconut or calabash base for inhalation. Ganja is placed (in whole nugs, there is no need for grinding) inside the ceramic piece, which has a filter. Charcoal made from coconut is placed on top of the ceramic part for combustion. To smoke out of the chalice, you light the charcoal, wait for it to heat up, and take a pull through the bamboo. The result is a clean and fragrant hit of cannabis. As Fatari mentioned, it’s also a very healthy consumption method.

The combustion is more controlled in a steam chalice than a joint, as the fire is not touching the raw herb directly. “Activated charcoal is very beneficial for detoxification purposes, cleansing toxins, and free radicals,” said Jamaican-based naturopath and herbalist Dr. Lakisha Jenkins.  There’s no residual solvents, as with other vaporizers, because the heat is coming directly from the coals. Between the coals and the water, or fresh coconut water, the steam chalice provides a double filtration system. 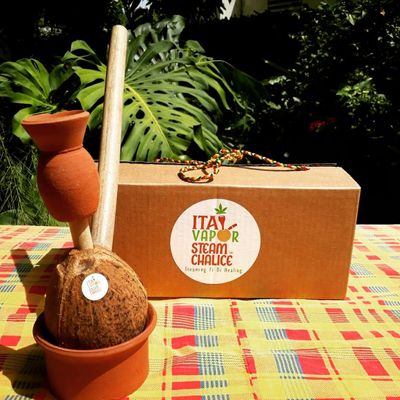 According to Robert “Ras Kahleb” Gordon, creator of the award-winning Ital Vapor Steam Chalice, the steam chalice was first spotted at a 1972 ceremony in Montego Bay, held by the Rastafarian Nyahbinghi, the oldest Rastafarian subgroup. “As I became part of the Rastafarian community, steaming was just a part of it,” Gordon said. “Because it’s all natural and tastes nice, it is very therapeutic. That’s where you want to be when you’re praying to Jah, who is also a ganja god,” he added. While it’s a handmade product, as interest in the chalice spread, folks like Gordon have made a living off selling chalices to others.

The first time someone passed me a steam chalice, I was instructed to bless the chalice before taking a hit. I thanked the chalice for providing me with a healthy way to consume cannabis and promised in return to spread the word of how cannabis can be beneficially used. The chalice itself is even created to invoke the four elements — fire, water, air, and earth. “You need the water for the bubbles, the earth is represented by the ceramic [parts] and the bamboo, you take a deep inhalation for air, and then the fire combines the four elements,” Gordon explained. The deep breathing required to take pulls from the chalice is also a spiritual practice. “Deep breathing creates meditative vibes, positivity, and anger management,” he added. 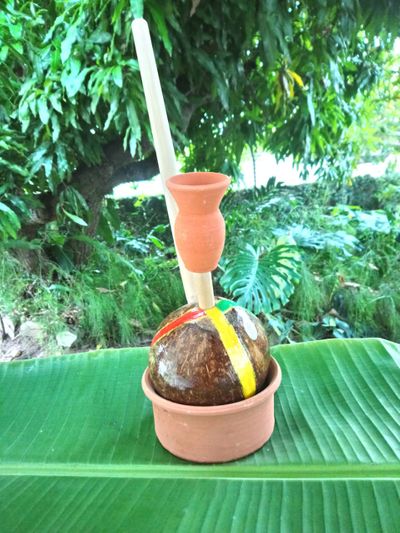 The water in the coconut or calabash base is also used in the ritual. “The water in the chalice can also be used to ‘anoint’ one's locks as a form of baptism or vow. The aroma from anointing is very pungent, and here we get into terpene and aromatherapy,” Fatari said. “The smoke blown from the nostrils is likened to clouds. During the ritual, there is a ‘channeling’ of positive thoughts and uplifting vibes.”

I grew up in the Caribbean, and protecting and properly representing its people and culture is of great importance to me. I expressed concern over writing about the steam chalice. Is this sacred tool meant for public consumption and widespread adoption, or should it be kept to Rastafarians? “You don’t have to have locks to be rasta; it’s more like culture,” Fatari told me. “The steam chalice is not unique, but it is special to the rasta community, as the rasta community endeavours to be as ital as possible.” 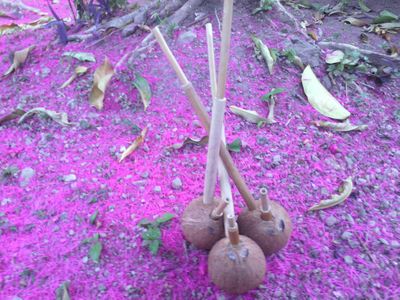 It’s true that other cultures, such as parts of India, have traditionally consumed cannabis in a sacred manner. While the US tends to put cannabis into categories (medicinal, recreational, etc.) everyone interviewed for this piece felt no need to establish such labeling, as long as respect is practiced during consumption.

“It’s a sacred piece, but in the day of commercialization, many use it in that recreational way,” Gordon said. “Because of its meditation and how it makes you feel, it naturally makes the link to a spiritual experience.” In other words, the act of putting together the steam chalice is a ritual in and of itself. 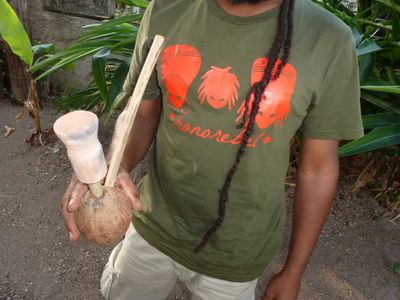 “The process of steam is not as immediate as lighting a spliff. Put in the water, warm up the charcoal, and inhale it a few times before you get the steam, which requires patience,” Gordon told me at one point. “Give thanks to the creator. Used recreationally, you need to respect this, as well. The steam chalice is a spiritual piece, it is also a recreational piece, and it is also a medical piece.”

WORLD
VAPE
HISTORY
CULTURE
MORE...
Sophie Saint Thomas
FOLLOW
Sophie Saint Thomas is a writer based in Brooklyn. She was raised in the U.S. Virgin Islands. Along with Merry Jane, her writing has been published in VICE, Cosmopolitan, Marie Claire, High Times, Nylon, Playboy, GQ, Harper's Bazaar and more. Brooklyn Magazine included her on their annual 2016 30 Under 30 Envy List. Her favorite strain of weed is Grand Daddy Purp.
Share this article with your friends!
AD
By using our site you agree to our use of cookies to deliver a better experience.
Accept
Decline
MORE FROM MERRY JANE