CULTURE
Famed Hip-Hop Documentarian Sacha Jenkins Talks Wu-Tang on “About That Time”
AD
The director of "Of Mics and Men" and "Fresh Dressed" joined our 4:20 live show to talk hip-hop history, fashion, and his upcoming project on Rick James.
Published on August 5, 2019

Last week, we were able to steal Sacha Jenkins away from his busy schedule and get him into the About That Time studio. There, the famed journalist and documentarian dished about his thoughts on NYC vs. LA, parenting, and he even dared to call bullshit on astrology!

Sacha grew up in NYC, which contributed to his love of all things hip-hop. He spent his salad days in the same Queens neighborhood as future all-stars like Nasir Jones, better known as Nas, as well as his filmmaker father, which gave access to the colorful streets of New York at a time when rap was gaining momentum.

Sacha has been able to turn these interests into projects such his Wu-Tang documentary, Of Mics and Men, which earned him an Emmy Nomination, and Fresh Dressed, his feature about the ties between fashion and hip-hop. 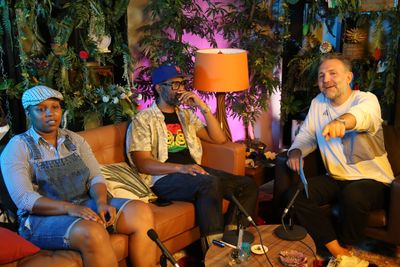 During his About That Time appearance, Jenkins told us about a photo of himself and the famed Harlem streetwear legend Dapper Dan. When asked what he thought was most important about the designer’s legacy, he explained that “hip-hop is all about seeing stuff in your environment that wasn’t made for you, and how to make it work for you.”

This was a deep sentiment from a man who’s spent his career documenting street culture, as well as shining a spotlight on underground communities without sacrificing a modicum of authenticity. Sacha’s deep understanding and personal connection to his subjects is no doubt what makes his work transcend the borders of New York and reach a broader audience.

As we learned on the live show, Sacha’s art is not just confined to the world of rap. He has also been involved in multiple rock bands over the past few decades, including his punk project The White Mandingos, which he formed with Bad Brains member Darryl Jenifer. If Sacha isn’t a modern-day Renaissance Man, we’re not sure who is.

Watch Sacha Jenkins’ full-length appearance on About That Time below, and be on the lookout for his next project on the life and times of Rick James.

For more on 'About That Time' visit our YouTube page here

MUSIC
HISTORY
WATCH THIS
CULTURE
MORE...
MERRY JANE Staff
FOLLOW
MERRY JANE is based in Los Angeles, California and is dedicated to elevating the discussion around cannabis culture.
Share this article with your friends!
AD
By using our site you agree to our use of cookies to deliver a better experience.
Accept
Decline
MORE FROM MERRY JANE