CULTURE
Ella Vos Goes Deep on Motherhood, Illness, and Music on “About That Time”
AD
On the latest episode of our 4:20 talk show, LA-based singer/songwriter Ella Vos took us on a journey through love, trauma, pain, and never-ending resilience.
Published on June 27, 2019

Singer Ella Vos may be a classically trained musician, but her path to pop-star success has been anything but traditional.

Based in Los Angeles, Vos began her music career in classical piano before embracing the pulsing rhythms of electronic dance music synths and her own dreamy vocal range. Originally stepping into pop music as the keyboardist for Michigan artist BØRNS, Vos broke into the industry as a solo act in 2016 after her vocals appeared on the EDM hit “Rolling Dice” by Just A Gent.

From there, things snowballed for Vos. Her debut single, “White Noise,” was released to critical acclaim from the likes of Rolling Stone and Neon Gold. With over 22 million streams to date on Spotify alone, the powerful song about new motherhood cemented the SoCal songstress as an artist to watch.  Singing candidly about life, love, struggle, and the country’s struggling sociopolitical climate, you can hear Vos open her heart on every record.

Vos released her first full project, Words I Never Said, in 2017, garnering even more mainstream attention. But as her star continued to rise in the LA music scene, Vos was diagnosed with lymphoma, adding new layers to not only her life, but to her vibrant and engaging music, as well. In 2019, Vos released Watch and Wait, an acoustic EP recounting her emotional journey through diagnosis and treatment that she called “a gasp for air, like coming to the surface after nearly drowning.”

Hot off the release of Watch and Wait, Vos has spent the majority of 2019 touring, playing shows for audiences across the globe. 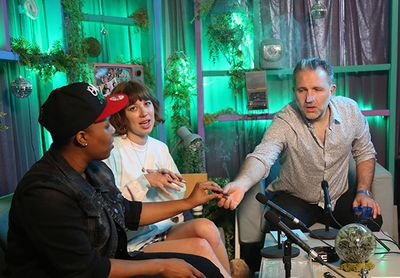 Joining the never-ending blunt cypher in our Los Angeles studio, Ella told us about how the superhero strength bestowed by pregnancy led her to begin songwriting, and how her bout with lymphoma has shaped the last year of her life. After celebrating the past few months of incredible health and conquering a fear of roller coasters, we checked out Ella’s Instagram for our “Posted Up” segment, where we found the secret to sound sleep on a plane, saw some scooter skills, and caught all the feels from her gorgeous mother-son connection.

On our “Roll the News” report, we took a look at the social justice aspects of Illinois’s new cannabis legalization law, some beef between world leaders, and an Indiana Catholic school standing up for gay rights. Of course, it wouldn’t be 4:20 without “Astrology Time,” where Ella embraced our dim lighting, brought out her own crystals, and saw Cancer season come to life with a spot-on reading. Sometimes the stars align just right. 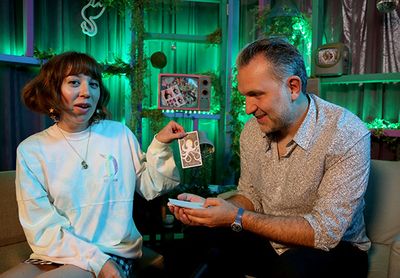 For more Ella Vos, follow her on social media, and stay tuned for more new music and performances in the second half of 2019. And be sure to check back in with MERRY JANE every week for new episodes of About That Time.

MUSIC
CULTURE
ABOUT THAT TIME
CANCER
MORE...
MERRY JANE Staff
FOLLOW
MERRY JANE is based in Los Angeles, California and is dedicated to elevating the discussion around cannabis culture.
Share this article with your friends!
AD
By using our site you agree to our use of cookies to deliver a better experience.
Accept
Decline
MORE FROM MERRY JANE