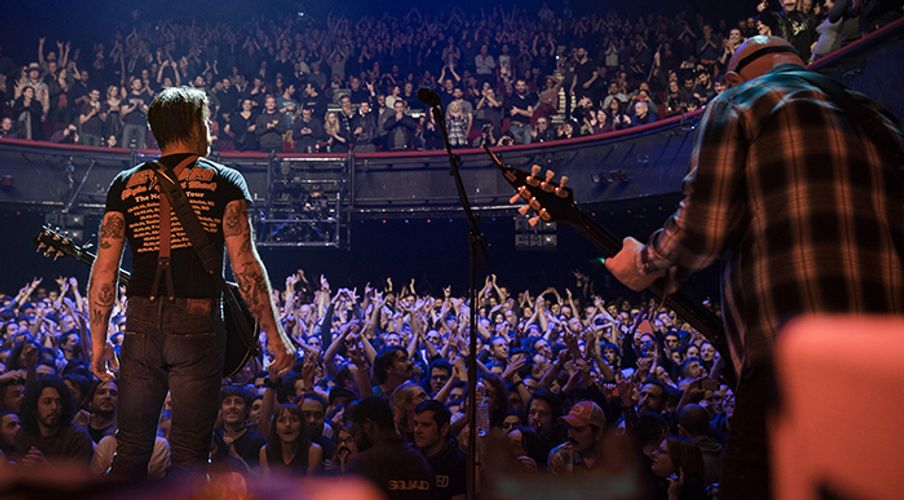 The new HBO documentary “Nos Amis (Our Friends)” captures the emotional devastation felt by Jesse Hughes and his band.

The new HBO documentary “Nos Amis (Our Friends)” captures the emotional devastation felt by Jesse Hughes and his band.

A terrorist attack is not just the act itself, it’s the fear and anxiety that lingers long after the explosions and gunfire. It’s the trauma found in people who survive and who try their best to make sense of something that makes no sense at all.

It’s evident from the beginning of the HBO documentary Eagles of Death Metal: Nos Amis (Our Friends) that bandleader Jesse Hughes has been trying his best to cope with the life-altering events that occurred on Nov. 13, 2015 at the Bataclan club that left 89 people dead, and which was part of a night of terror throughout Paris.

It happened during the middle of a show. To hear the group describe it, EODM were at the height of their powers, the synergy in the venue something to behold. The American band, which had always been a revolving door of musicians with Hughes and Queens of the Stone Age’s Joshua Homme being the only constants, was about to tear into the cut “Kiss the Devil.”

For this European tour, Homme had stayed behind with his pregnant wife. He and Hughes had been friends since childhood, but for now the Eagles of Death Metal (Dave Catching on guitar; Matt McJunkins on bass; and Julian Dorio on drums) were surrounded by a room full of some of their closest companions—their fans. Hughes made a heart-shaped symbol with his fingers as he addressed the crowd as “nos amis,” French for “our friends.”

As the band played, what sounded like fireworks rang through the air.

Then bodies started hitting the floor and panic ensued.

No matter how many details you hear about a situation as horrifying as a terrorist attack, there’s probably no real way to fully grasp the experience unless you were there. Still, first-person accounts can rattle you to the bones. During an interview for the documentary, an emotional Hughes describes witnessing a young woman being shot, and we can feel the pain in his voice:

“Everyone fell like wheat in the wind…. I saw fear take a hold of everyone in that theater. It’s not like it is in the movies. [When someone gets shot] it’s a force pushing a body in a direction it doesn’t want to go, and [when a bullet] rips it open [the body] makes noises that are not normal…when something is exploding out of [someone’s] chest. It just blew this mist into the air and it tasted like I had copper pennies in my mouth.”

As one can imagine, the tears have flowed often in the aftermath of the deadly attacks. Hughes even seems to acknowledge this by wearing a T-shirt with “Crybaby” emblazoned on the back.

The outspoken musician, who in a controversial interview last year alleged that club security, more or less, allowed the attack to happen, has apparently decided to focus on positivity moving forward. And he’s relied on Homme to help him with the healing process. A substantial portion of Nos Amis is about their friendship that goes back to the days of them growing up in and around Palm Springs and Palm Desert, Calif., in the Coachella Valley. We hear about the musically-inclined Hughes, who originally hails from South Carolina, at one time needing his friend Homme to stand up to bullies for him. It was also Homme who helped him break out of a particularly destructive period after the breakup of his marriage, giving Hughes the power to go from a square life to rock stardom.

But to deal with the ensuing trauma and subsequent survivor’s guilt, it was important for Eagles of Death Metal to return to Paris and demonstrate that they could go on. So, just three weeks later, on Dec. 7, 2015, EODM joined U2 on stage in a display of solidarity and resistance. EODM returned to Paris again in Feb. 2016, this time to do their own show at the Olympia and reconnect with their fans.

For Hughes, the return “added an unforeseen pressure that I never counted on,” but it was a responsibility he couldn’t avoid even if he felt “terrified of getting back [on stage] and it not being the same.”

“Me and every person that was there, we are bound by this,” he says shortly before the trip back. “I take it as a holy charge, this duty of leadership that I’ve been elected to by order of circumstance…. I also love rock ’n’ roll and I want rock ’n’ roll to go back to being the way it was for me.”

As captured by documentary cameras, the Eagles of Death Metal’s comeback concert feels triumphant. Several fans who were at the Bataclan show are interviewed and acknowledge the significance of being able to enjoy the concert all the way through like it was originally meant to be.

As Homme says, “Music is important. It’s a talisman for helping those people [who were at the show] heal. Or, at least, it’s the first step out of a terrible situation.”

The documentary, directed by Colin Hanks, is straightforward with not a lot of frills, but really that’s what the somber subject matter calls for. The film does shy away from getting too deep into Hughes’ background as a minister and Second Amendment advocate, although in a clip from an emotional French TV interview Hughes is asked about his stance on gun control after the attacks and he makes it clear that “the only way that my mind has been changed is that maybe that until nobody has guns everybody has to have them, because I don’t want to see anything like this ever happen again.”

Having had time to reflect, Hughes admits in Nos Amis that he’s unsure of what he should further say or not say about his views: “There’s political ramifications here that I think are important, but are they appropriate [to talk about right now]?”

Judging by his emotional state throughout the documentary, it will take a while for Hughes to get over this tragedy, but any comfort he finds will probably start with knowing he’s surrounded by friends.