CULTURE
Drumma Boy Talks Beats and Family on the Latest "About That Time"
AD
Watch our full-length interview with one of the greatest producers in the history of hip-hop. And don't forget to "listen to this track, bitch!"
Published on August 1, 2019

On the latest episode of About That Time, we sat down with legendary hip-hop producer Drumma Boy, and it got real… real quick! We dove right in to heavy topics like the loss and the legacy of his brother, Ensayne Wayne, and how he is driven to create as a means to build an authentic connection with his audience. We also got to hear the true story behind Drumma’s catch phrase, “Listen to this track, bitch!”

The producer has worked with some of the all-time greatest hip-hop artists, and helped define that unmistakable ATL sound. T.I., Migos, Outkast, Gucci Mane, Waka Flocka Flame, and Jeezy are just a few of the artists with whom he has created amazing, iconic music. Drumma Boy has also teamed up with famed Southern innovators from his birthplace of Memphis, such as Three 6 Mafia and Gangsta Boo. 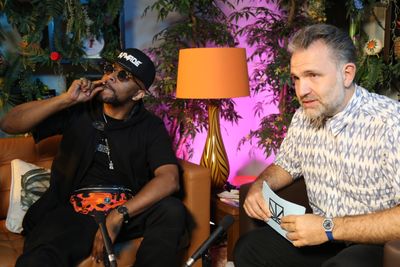 Drumma Boy’s love for music did not start in the club; it first came to life when he was a toddler and took up his first wind instrument. He hails from a family full of musicians including his father, a professional clarinetist, and his mother, an opera singer. Many of his extended family members played music, as well. The beat maestro is still extremely close with his entire family, and takes time to cherish each one of them. Despite the incredible loss of his brother, he is able to maintain perspective and continues to feel that his life is blessed.

While at the ATT studio, Drumma Boy put great emphasis on being a positive role model for those coming up in the game. When asked what advice he had for artists trying to break into the industry, Drumma replied, “Digital assets.” In today’s industry, artists can get on playlists and get their music out there without needing the funds to press physical copies. Drumma Boy’s hustle is proof, as he shared with us that he’s made over 1000 tracks with Gucci Mane alone.

Tune in to the newest episode above, roll one up, and don’t forget to let us know what you think in the comments! And for more Drumma Boy, make sure you check out his new tune "Gone" with Master P and Jeezy, which is out now via the I Got the Hook Up 2 movie soundtrack.

VIDEO
WATCH THIS
CULTURE
ABOUT THAT TIME
MORE...
MERRY JANE Staff
FOLLOW
MERRY JANE is based in Los Angeles, California and is dedicated to elevating the discussion around cannabis culture.
Share this article with your friends!
AD
By using our site you agree to our use of cookies to deliver a better experience.
Accept
Decline
MORE FROM MERRY JANE