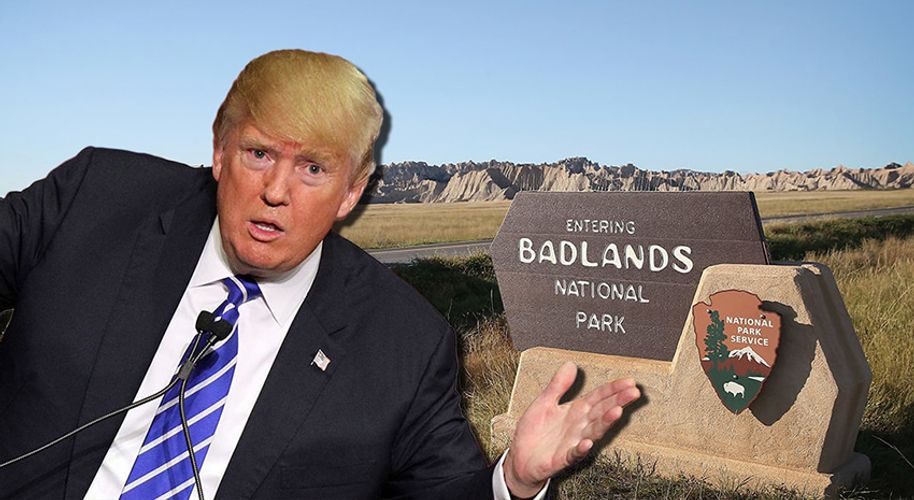 The resistance to protect our environment and rights continues to grow.

The resistance to protect our environment and rights continues to grow.

Another unlikely blow was struck in the resistance Tuesday when the Twitter account of Badlands National Park—a beautiful park in South Dakota known for its colorful canyons and rock formations—started tweeting climate change facts. These tweets followed Trump’s gag order on EPA social media updates and speaking to reporters. The tweets have since been deleted.

Guess who screencapped the glorious @BadlandsNPS Revolt of 2017 right before the tweets were deleted. #moi #Badlands #climatechange pic.twitter.com/k7GshtGpDs

This was neither the first nor the last blow in the battle between our nation’s parks and the reality star who is now our president. You might think that the tension between Trump and the parks only goes back to Inauguration Day. On the day of Trump’s flaccid coronation, the National Park Service retweeted side-by-side photos of Barack Obama’s 2009 inauguration and Donald Trump’s 2016 inauguration. The tweet was quickly deleted. Department of the Interior accounts were told not to tweet until further notice, and the NPS was forced to apologize. It bears mentioning that the tweet did violate a standing parks policy of not reporting crowd sizes, which was instituted after 1995’s Million Man March.

Though these tweets have brought attention to the tension between the stewards of our nation’s most beautiful lands and the former host of The Celebrity Apprentice, these 140-character barbs were not the only blows struck in this battle. In fact, the conflict between business-friendly conservatives and the NPS goes back decades. The government owns over a quarter of the nation’s land, and it is divided among a number of agencies, including the NPS, Bureau of Land Management, the U.S. Forest service, and several others. For a long time, Republicans have wanted to take land from the BLM and other agencies and give it to states. Their thinking is that once it is given to states, the states will then sell it to private interests. State and local government has historically been more flexible, especially when the budgets are tight. Development has even been considered on the edge of the Grand Canyon.

This tension isn’t limited to politicians. If you remember the Oregon militia standoff last year, the Bundy family was agitating for the same thing. They want cattle to be able to graze on government land without Bureau of Land Management contracts. Grazing fees were also the motivation for their armed standoff in Nevada several years earlier. This is why many in the GOP were careful not to condemn them too forcefully, even though they brought guns into a wildlife refuge. Numerous business interests large and small want to encroach on public land for short-term personal gain.

As expected, the new Congress has already moved to set up 640 million acres of public land for potential ceding to private interests. The Guardian reported that Utah representative Bob Bishop added a line to the new budget proposal which states that transferring public land to “state, local, government, or tribal entity shall not be considered as providing new budget authority, decreasing revenues, increasing mandatory spending, or increasing outlays.” This is a legalistic way of saying that federal land has no value, and even though America gets tons of revenue from forestry, mining, and other use of this land, we can give it to states, who will then hand it over to private interests, for free.

The stakes are high, and to the delight of nature lovers and Twitter jokesters, the NPS is not going down without a fight.

An unofficial account popped up created by park employees, branding itself the “alt” National Park Service (@AltNatParkSer), tweeting out climate truth and vowing to speak truth to power.

Mr Trump, you may have taken us down officially. But with scientific evidence & the Internet our message will get out.

"We want the opportunity they have to prove their loyalty. We are asked to accept a denial of that privilege in the name of patriotism." pic.twitter.com/4JedTyfX57

Here’s hoping we continue to find #resistance in the most unexpected places.