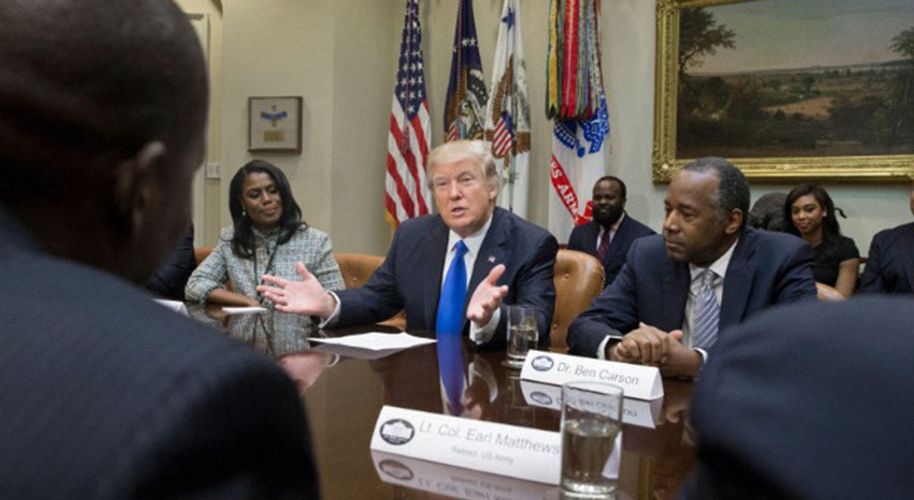 The Big-League Fail That Was Trump Discussing Black History Month

Talking points included his personal victories, “fake news,” and, oh yeah, some black people the president may or may not know anything about.

Talking points included his personal victories, “fake news,” and, oh yeah, some black people the president may or may not know anything about.

Flanked by Omarosa Manigault on one side, and soon-to-be Secretary of Housing and Urban Development Ben Carson on the other, Donald Trump held a press conference on Wednesday to mark the beginning of Black History Month.

Befitting the occasion, Trump began his speech with a shout out to his successful presidential campaign, and the numbers he received in the November election. “Next time we’ll triple the number or quadruple it. We want to get it over 51, right? At least 51,” he said.

Once that relevant and important note was out of the way, Trump moved on to discuss some recent “fake news” of the week, which asserted (incorrectly) that a statue of Martin Luther King Jr. had been removed from the Oval Office. The story was “a disgrace,” Trump said. He continued on to say that King’s life was an example “unique in American history.”

“Wherever Fox is, thank you,” he said.

After clearing up the question of where Martin Luther King Jr’s statue is located, Trump took a couple of sentences to acknowledge the “amazing job” Frederick Douglas did, as well as “Harriet Tubman, Rosa Parks, and millions more black Americans who made America what it is today.”

He then went on to discuss how helpful a few of the black people in his group had been throughout the past year.

“Darrell—I met [Pastor] Darrell [Scott] when he was defending me on television,” Trump said. “And the people that were on the other side of the argument didn’t have a chance, right? And Paris [Dennard] has done an amazing job in a very hostile CNN community. He’s all by himself. You’ll have seven people, and Paris. And I’ll take Paris over the seven.”

After expressing his gratitude to the black people in his own life, Trump went on to talk about the need for better schools, better wages, better work, and, of course, better inner cities—where, according to every speech he’s ever given, all black people live. At the helm of what Trump called the “big league” project of cleaning up inner cities is former neurosurgeon Ben Carson. Carson nodded along in agreement as Trump reiterated his law-and-order stance on policing, and promised to make black communities safer via law enforcement.

There was no acknowledgement of the Black Lives Matter movement, or any of the current or historical turmoil between black communities and the police. Nor, in acknowledging the “tremendous history of African-Americans throughout our country” and their “unimaginable sacrifice, hard work, and faith in America,” did Trump mention slavery, Jim Crow laws, or institutional racism.

In true Trump fashion, he didn’t “go into details,” but said that he and his group of black people got “substantially more” than other candidates in the past. More of what, exactly, remains unclear.

Trump wrapped up his speech by thanking his group of black aides once again, and took time to thank “[his] television star” Omarosa specifically:

“Omarosa’s actually a very nice person, nobody knows that. I don’t want to destroy her reputation but she’s a very good person, and she’s been helpful right from the beginning of the campaign, and I appreciate it. I really do. Very special.”

Because, really, where would America be without Omarosa?