CULTURE
Do You Know Your Cannabis Anatomy? Here’s How to Identify Each Part of the Plant
AD
There’s a lot more to weed than just the flowers.
Published on February 10, 2020

Even the most seasoned of the weed elite often use informal terms when referring to the various parts of our favorite plant. For instance, how many of you reading this refer to the spindly orange threads sprouting from the buds as “hairs?” How many of you have, at least once, referred to the plant’s trichomes as “crystals?”

Which means if we’re going to play ball in the big leagues, we gotta step up our biology and semantics game, too. 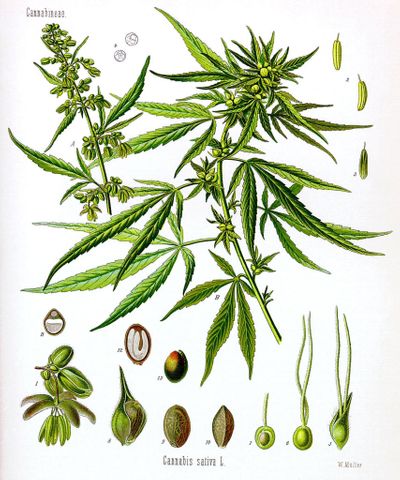 Let’s Start From the Top Down

The easiest way to crash course in cannabis anatomy is to start from the top of a mature plant then mosey on down to its lowest parts. For this exercise, we’ll only consider a mature female plant. Males and hermaphrodites will be excluded. 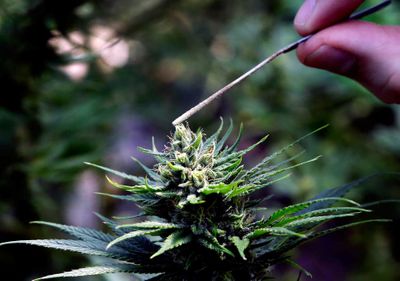 Colas (Spanish for “tails”) are tight, dense clusters of flowers that form at the ends of branches/stems. They’re sometimes called terminal or apical buds. The cola at the top of any given plant is usually the largest, which is why some cultivators have nicknamed them the plant’s crown. Basically, if you see what looks like a giant bud that’s made up of smaller flowers bunched up together, you’re looking at a cola.

Most folks see a plant’s bracts after they’ve served their primary function: protecting and supporting the flower’s reproductive parts — the ovules and the pistils — prior to blooming. Bracts are small ovular “cups” that split open and expand their contents as the flower reaches maturity. After full bloom, the bracts continue to provide structural support for the flower. The bulk of any given bud that’s bloomed, dried, and cured is made of bracts.

Bracts also contain the highest concentration of trichomes than any other part on the flower, so that’s where you’ll find the most cannabinoids and terpenes, too. 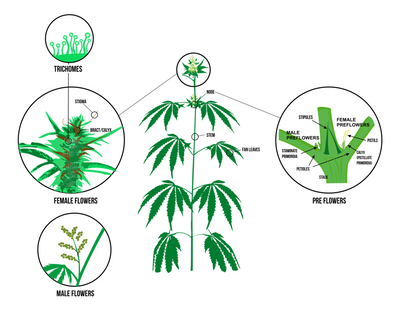 Calyces are commonly confused with cannabis bracts, but they’re not the same thing. On cannabis, calyx cells form the perianth, which is that paper-thin encapsulation around the ovule.

Think of the ovule as a proto-seed. One day, it’ll grow up to be a real seed that can, in turn, grow up into a real plant. But for now, it’s a tiny whitish bead, and just like full-blown seeds, you don’t want to smoke these. 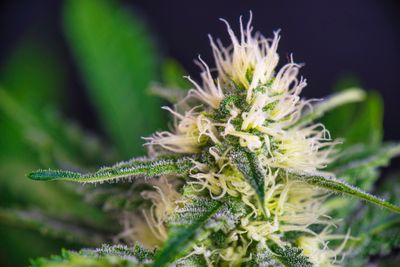 In everyday parlance, pistils are the orange, white, or brown “hairs” found sprouting from weed buds. Their main function is capturing pollen from male flowers so reproduction is easier and more efficient. As for the average cannabis consumer, pistils do nothing for the consumption experience: They don’t indicate a strain’s potency, nor do they affect the buds’ flavor or burnability. They’re damn pretty, though! 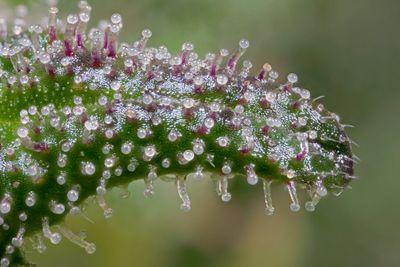 Ah, the trichome, home of every weed strain’s true essence. Trichomes, sometimes referred to as crystals, are oily, glandular sacs where most of the flower’s cannabinoids and terpenes are produced. (There’s another type of trichome that’s non-glandular and doesn’t produce the good stuff, but those aren’t important to you, dear toker.)

When trichomes are knocked off the flower, they’re called kief, which can be smoked as-is or pressed into hash. Trichomes are arguably the most valuable parts of cannabis, since these largely determine a strain’s potency, aromas, and flavors.

Sugar leaves are the tiny leaflets that poke out from within the flower itself. These are usually snipped from the buds during the trimming process. And since they contain high densities of trichomes, they’re ideal for making hash and other extracts, too. 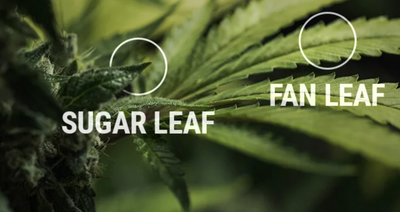 The big ol’ iconic leaves you see growing from cannabis stems are called fan leaves. During cultivation, some or most of the fan leaves are cut from the plant so it can conserve resources and focus most of its energy into producing bigger and better flowers. Fan leaves may contain some trichomes, meaning they can have some cannabinoids and terpenes, but usually not enough to warrant harvesting them for smoking/vaping. However, fan leaves make great blunt wraps, and, in fact, they served as the very first blunt wraps. If you’re curious how that works, look into the ancient Thai Stick.

Maaaan, if you don’t know how to identify weed’s stalk, stems, seeds, or sticks, put down the pipe and take a tolerance break. The same goes for its roots, too.

AGRICULTURE
THC
EDUCATION
FLOWER
MORE...
Randy Robinson
FOLLOW
Based in Denver, Randy studied cannabinoid science while getting a degree in molecular biology at the University of Colorado. When not writing about cannabis, science, politics, or LGBT issues, they can be found exploring nature somewhere in the Rocky Mountains. Catch Randy on Twitter and Instagram @randieseljay
Share this article with your friends!
AD
By using our site you agree to our use of cookies to deliver a better experience.
Accept
Decline
MORE FROM MERRY JANE