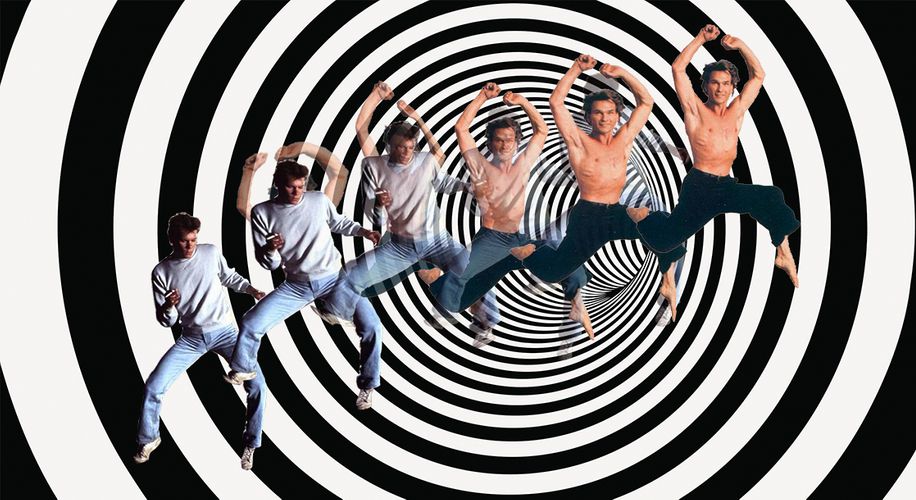 "Dirty Dancing" Just Turned 30. Is It the Same Movie as "Footloose," or Are You Just High?

The dancing in "Footloose" is dirty. The feet in "Dirty Dancing" are loose. There is no way to know which is which, and that uncertainty suggests we have crossed into another dimension.

The dancing in "Footloose" is dirty. The feet in "Dirty Dancing" are loose. There is no way to know which is which, and that uncertainty suggests we have crossed into another dimension.

The fabric of your reality is fraying at the seams. Your president is an orange racist that America found on reality TV, you eke out a living as an independent contractor for a tech company that would like to take your job away and give it to a robot, and because are too busy to sit down and eat, you consume flavorless but nutrient-rich Soylent in place of your meals. Instead of using what little spare time you have to socialize in reality, you spend your nights sitting alone at your computer, drinking mass-produced craft-style beer, posting online. Your life is so terrible that it cannot be real. This must be a nightmare. You slap yourself in the face.

You do not wake up, because you are already awake. You scream but no one hears you, because there is no one around.

How did things go so horribly wrong? Is it the eclipse's fault? Are you living in another, shittier dimension than the one you came from, and when you crossed over, was your mind wiped and your old memories replaced with new ones? If this horrifying possibility is true, its own sinister design ensures you have no way of knowing for certain. But of one thing, you are sure: As technology develops, it becomes easier and easier to identify points where minor details veer from the details you remember from your past. Like glitches in the matrix, your memories and perceptions sometimes don't align with the physical proof.

Consider the Berenst#in phenomenon, where thousands of people remember the spelling "Berenstein" on their Berenstain Bears books, but then upon seeking out the books, find that the name is spelled Berenstain. Or the hundreds of people who remember the Sinbad film Shazaam, which arguably does not exist, though the Shaq film Kazaam does. Imagine it's happened to you. What is that feeling in your gut––that feeling of terror, of nonunderstanding. You're sure it was Sinbad. You remember the movie so vividly––you can see your child-sized hands on the VHS cover, tracing the familiar bold print. You know, somehow, deep in your physical body: this is wrong. Your body remembers its true universe, the Shazaam universe. But somehow you've crossed over to another place. The Kazaam universe. It's the same, but different. What if it keeps happening? What if it keeps getting worse?

You're at home, visiting your parents for a weekend. You gather around the familiar table in the familiar kitchen, you cook a familiar, beloved meal, and you eat it together. After dinner, sated and relaxed, you move into the living room with a glass of wine, and sit together on the couch facing the TV.

"Let's watch a movie," your mom says. "What about Dirty Dancing?"

Ah, yes, Dirty Dancing. One of your favorites. You remember it vividly from your youth. Iconic scenes stick out in your mind: a girl watching a man's hips swing in tight pants, the intoxicating movement of bodies in a basement, the uprising of the talent, artistic poor over the crusty, conservative, old rich.

"I love that movie," you say, and so your mom starts the DVD.

As the movie rolls on, you begin to feel unsure.

"This is Dirty Dancing, right?" you ask.

"Of course," your mom says.

It has the girl watching a man's hips swing in tight pants. It has the skinny women in cut-off shirts that drape off their shoulders. It has out-of-touch old men, men who seek to stop the joy and self-expression of dance. It has young men, evil men, who abuse young women to exert their fading power. It has the gymnastics scene where––wait, what the fuck?

You don't remember these tight-pantsed young men angrily leaping and flipping around a warehouse in an expression of youthful power and despair. This is a scene from a movie, but this scene is not from this movie.

"This is Footloose," you say.

Footloose and Dirty Dancing are essentially the same montage-heavy film, with minor narrative adjustments––Footloose follows Ren, a high school boy in a small town, overthrowing a conservative law against dancing while teaching the youth to dance along the way. Dirty Dancing follows Baby, a young rich girl learning to dance from the poor instructors, and overturning the conservative culture of a small mountain resort along the way. Or is it the other way around? Both films are rooted in the power of dance as an expressive art form that heralds change. Both films show how vigorous, youthful energy can overthrow longstanding power structures.

Which is which? The dancing in Footloose is dirty. The feet in Dirty Dancing are loose. There is no way to be sure.

Somewhere, phase-shifted in another dimension, you watch Footloose with your family, and you say, "I love this movie, Dirty Dancing. Dirty Dancing, this is the movie that I love."

Acknowledging the existence of other universes can be unnerving, at first, but once you radically accept the truth of the Dirtyverse and the Footloosiverse into your heart, you can take solace in the fact that the universe your current consciousness does not inhabit may be a better world. Maybe, in that world, there are miniscule changes that make your parallel self's life a little easier. Say, perhaps, your health premium is fifteen dollars lower. Or your roommate actually talks to you, and also does their own dishes. Or, perhaps, in the Footloosiverse, you are not validated by social media; instead, you are loved.

Accepting these universes allows for the exploration of further parallel universes, like the Honeyverse, where the film Footloose is called Honey, the 2003 film Honey doesn't exist, Bernie Sanders won the presidency, and you have single-payer healthcare and a legal dispensary-slash-brewery next door. There is another universe in which the world is currently engulfed in nuclear war, the Prime Minister of Canada is a talking dog, and you starred in the movie Honey, which in this timeline was made in 2004. There exists another universe still, in which you were never born.

There's also the chance that this is all nonsense, and only an extremely stoned teenager would even entertain the possibility of parallel universes based around dance flicks instead of going with the usual explanation of faulty human memory. But perhaps, if you smoke enough before bed, you can travel to the Honeyverse in your dreams.

Kate Davis Jones is a writer living in North Carolina. She blogs at badcontent.wordpress.com.