CULTURE
Dipped Up: We Talked to the Creator of the World’s First Cannabis Snus
AD
Is the world ready to replace chewing tobacco with cannabis snus? Cannadips is betting on it, and their THC and CBD-infused pouches offer a brand new way to get lifted.
Published on June 5, 2019

All photos courtesy of Cannadips

There’s a new form of ingesting cannabis out there — one that acts fast, unlike traditional edibles. Get ready for cannabis snus, made by a company called Cannadips. This delivery method allows cannabis to be absorbed through the back of the mouth’s lining, then directly enters the bloodstream, bypassing the liver — meaning that you can feel the effects within a minute. Unlike edibles, the high is more controlled and doesn’t last nearly as long.

The name of the product is somewhat misleading, since Cannadip isn’t really a dip at all, but more similar in fashion to Swedish snus. Unlike American chewing tobacco or dip, Cannadips doesn’t require you to spit like a cowboy or an MLB player from the ‘80s. Instead, after five or so minutes of letting the pouch sit in between your cheeks and gums, you can spit it out like gum.

Case Mandel, the co-founder and CEO of Cannadips, assumed there were dozens of cannabis snus products available when his friend (and now business partner), Cliff Sammet, suggested they create a CBD and THC substitute for folks who use chewing tobacco. When they realized no other cannabis chews or snus products were out there, they not only decided to create a healthy alternative to tobacco dip, but also worked to create a brand inspired by American cowboy nostalgia. Upon production, however, Mandel realized there were numerous tech and product development barriers, which is why legit cannabis chew brands haven't really appeared in the legal market previously.

The major barrier involved turning cannabis into a product that could be emulsified or water-soluble — meaning it's “activated” through saliva and absorbable in the mouth. The thing is, cannabis is typically fat soluble, meaning that it generally wants to be absorbed in the gut. Mandel and his team of chemists were able to solve the problem by using a dried emulsion technology, where they take the cannabis oil, break it down, and then dry it into “flakes.” This then allows the pouches to become absorbed through saliva and also makes it shelf-safe.

Launched in 2016 in Humboldt County, Cannadips now has a couple copycat competitors that have recently hit the market. Cannadips, however, offers more flavors and dosages — and both CBD and THC snus offerings are available. Whereas the CBD Cannadips are available nationwide, the THC Cannadips are currently only sold in California dispensaries, although they do have plans to start selling in Las Vegas by the end of 2019. MERRY JANE got in touch with Mandel to discuss how he overcame scientific roadblocks and created a new, fast-acting dosing method — one that is now considered separate from edibles, oils, vapes, and traditional smoking. 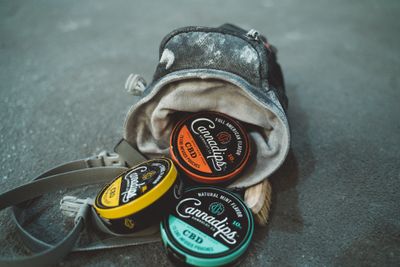 MERRY JANE: Why did you create Cannadips and what was the inspiration behind it?

I know you had some technical challenges from an R&D standpoint while creating Cannadips. Can you go into what those were?

I actually already had some previous experience in the extraction space. I'm also an owner of ArcataX —  the first type 7 facility in Humboldt County — which is a volatile testing lab that allows for lots of research and development. There, we have a large scale extraction lab that creates live resin. So I had a good idea of how cannabinoids work, and the process for extraction. When we started thinking about production, I realized we had a couple of different problems. The first had to do with getting the product to run through the equipment. Cannabis oil is very sticky, but the equipment needed for “pouching” (i.e. the little tea-like pouches that hold the cannabis “flakes” in Cannadips) needs to be very dry, otherwise the cannabis oil wouldn’t shoot through the metal tubes necessary to create the final product.

The second obstacle we had to overcome involved getting the cannabinoids to most effectively absorb through the mouth. During the time we were developing Cannadips, there wasn't really much technology developed around water dispersibility (meaning the ability for cannabis to be absorbed by adding water or saliva). So we made some industry calls and were put in touch with four chemists. We tried four different emulsion technologies until developing what we have today.

So what did you finally develop?

What's exciting about our chemist’s flake technology is that it makes this dried emulsion without the high temperature. So we get to utilize dried terpenes from the cannabis and hemp oils, which leaves you with a more medicinal product in the end.

Also, interestingly, Cannadips is not considered an edible. In fact, in California, we successfully lobbied with a Harvard biochemist, Dr. Matthew Hoffman, who did some studies on our product to educate the California Department of Public Health on oral absorption, and how our product should not be limited to the same milligram constrictions as edibles. So Cannadips is kind of its own product category. 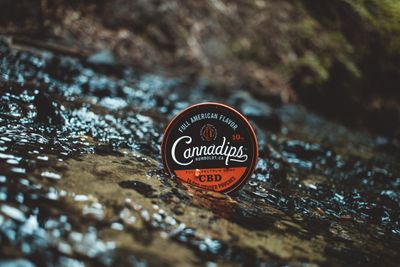 How were you able to get the oral absorption to become fast-acting?

Our product sits in the mouth in a pouch, which is the perfect delivery system for the technology. The flakes inside of the pouch solubilize almost instantly. Being soluble is what gives them the opportunity to get absorbed by an artery in the back of the mouth called the buccal. The buccal artery goes straight to the brain, bypassing the liver so you get an instant effect. It doesn't become [11-hydroxy-delta-9] on the THC side, which creates that edible purgatory.

When we originally designed Cannadips, we just thought, How do we get the damn pot in the tin and get people to quit chewing tobacco? We didn't really realize what we were actually going to do is create a precise dosing mechanism that is completely discreet, fast-acting, and a new way to get high that’s distinctly different than every other [consumption method].

Does the company have a patent on flake technology?

Our chemist has a patent on it, and we have an exclusive on that technology for our product line.

You mentioned that, initially, you wanted to make this a substitute, or a safer alternative, for people who use chewing tobacco. Is that still your main market?

Yeah, that’s how we got the idea. But we are actually hoping to expand the market. When we initially launched this product into the cannabis market in California, it did not have immediate success because people were associating it with tobacco. Although we created a whole new way to dose, there was so much stigma around tobacco dip. It's loaded with negative connotations. Still, though, we’ve managed to win a lot of people over.

That said, our product has become really popular with anyone who dips tobacco. We now have national distributors in about 46 states [for the CBD-only Cannadips], and Cannadips are sitting on people’s shelves next to chewing tobacco, so it is serving that purpose. It’s, essentially, the perfect product for anyone trying to quit. People who chew tobacco have an oral fixation. Cannadips satisfies that fixation.

There’s also nothing synthetic in our product. The pouch is coconut fiber-based and completely natural. The alternatives on the market right now for people who are trying to quit dipping are, in my personal opinion, subpar in terms of flavor and effect. So, in just that market alone, we're sitting really pretty. We would still love to see the product reach more consumers outside of that, though, which is what we’re working on. What else is in the coconut-based pouches besides cannabis flakes?

Depending on the flavor, the other ingredients vary. Our products are all-natural.  We sweeten them with natural sweeteners like monk fruit and erythritol and put essential oils to impart our flavorings.

What are the types of products you have?

For the California cannabis market, we have three types of Cannadips products: THC, THC and CBD, and CBD-only, and each come in three flavors [mint, citrus, and “American”].  The THC comes in a high dose and low dose — 10 and 20 mg pouches. Then we have our THC and CBD in California with a ratio of four parts CBD to one part THC — so it’s 20 mgs CBD to 5 mgs of THC. Our national product is THC-free CBD [10 mgs], which is a broad-spectrum hemp extract. We've really worked on committing to that.

The hemp extract is much more expensive since we're not using isolate. [Note: Some products simply use cannabinoid isolates — which means they only extract, say, CBD — leaving out all the other cannabinoids that have myriad health benefits when consumed together.] We only remove the THC, allowing terpenes to stay in there along with other cannabinoids like CBG and some CBC. We do this through a process called flash chromatography, and it results in a lot of time and cost, but at the end of the day, we're all about putting out the most medicinal and efficacious product possible, and this is the way to best do that. Do the THC and CBD products work differently?

The THC and CBD products work differently based on how CBD and THC affect the body. We use the same technology around water dispersibility in our California THC line and the national hemp-derived CBD line.

While we cant make any medical claims regarding how our products work, what we can say is the effects would be more attune to vaping than eating an edible or smoking. We have also amplified the CBD experience by utilizing certain natural terpenes as well.

We started just in the California cannabis market, and then realized the [national] market potential. It was then we built out a facility in Nevada and scaled up so we could be able to service the whole nation with our CBD Cannadips. 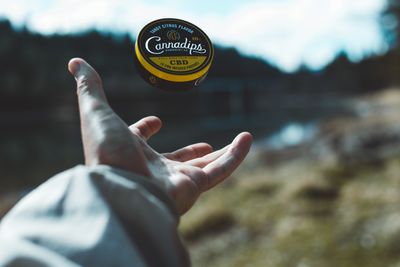 Are you developing any new products?

Yeah, we have a national hemp CBD brand called AMMO that should go to market towards the end of the year, as well as a CBD live resin vape brand that will be available in California. We are constantly innovating products and brands to fulfill new sectors within the cannabis marketplace.

What else is next for you?

We are in the process of rolling out the Cannadips CBD on a very national scale, hoping to make them available at convenience stores around the US. Our focus now is on C-Store chains and supporting these large rollouts.  We just launched in Sheetz (a large Pennsylvania-based convenience chain) and Kwik Trip (Wisconsin-based chain) too.

For more on Cannadips, visit the company’s website here

LEGALIZATION
INTERVIEW
PRODUCT
INNOVATION
MORE...
IN THIS STORY
CBD
Click to shop at our CBD store
Zachary Zane
FOLLOW
Zachary Zane is a Brooklyn-based writer, speaker, and activist whose work focuses on lifestyle, sexuality, culture, and entertainment. He was formerly the digital associate editor at OUT Magazine and currently has a queer cannabis column, "Puff Puff YASS," at Civilized.
Share this article with your friends!
AD
By using our site you agree to our use of cookies to deliver a better experience.
Accept
Decline
MORE FROM MERRY JANE