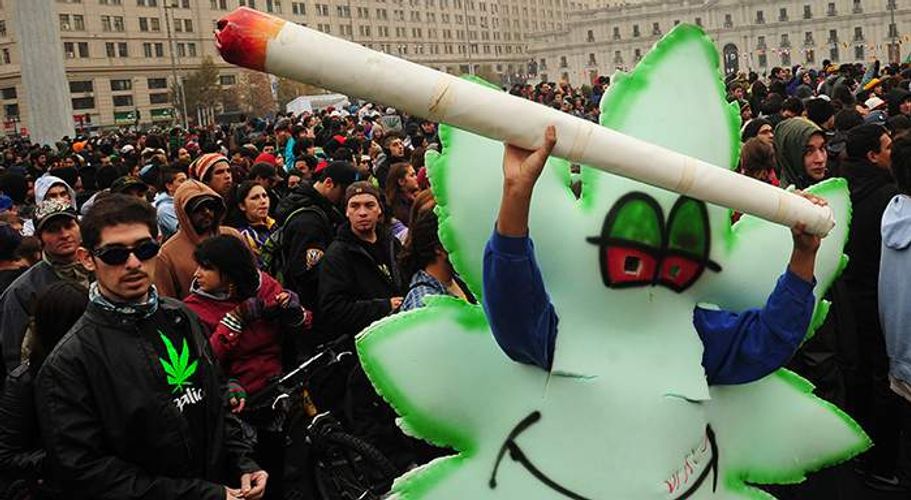 Medical Marijuana and the Green Rush Are Changing Chile

Walk through the history and the shifting streets of the nation’s capital.

Walk through the history and the shifting streets of the nation’s capital.

We roll a joint, watch some smoke vanish in the air, drink some water, and that’s that. We are out in Providencia at 6 p.m. with a bustling crowd that will not keep us from our goal: walk five blocks and count every single grow shop, head shop, smart shop, and smoke shop in our way.

Providencia is an important business district in Santiago, the Chilean capital. It’s a district that has experienced a radical change in five years. In this short period of time, the cannabis market has nestled deep within the Chilean consumer—a fact that raised concerns among traditional congressmen and society. None of that could stop what was about to happen.

We stop, look around, and there are five stores in the middle of an important avenue, all of them displaying big bongs, bubblers, vapes, and pipes, as well as many other accessories. These shelters are continuously renewing themselves, since Chilean consumers’ thirst for innovation and an enhanced smoking experiences doesn’t seems to know any limits.

More than a decade ago, Chilean society viewed weed completely differently than it does today. It was an issue that few people spoke about, and it was associated with criminals.

It was in this environment that 57-year-old Angello Bragazzi started Chile’s first online market selling marijuana seeds—a perfectly legal business that was not typified in the penal code.

Everything was fine until senator Jaime Orpis (currently the first Chilean politician jailed for corruption) announced a press conference to publicize Bragazzi’s sale of marijuana seeds, which, according with his hardline policies on marijuana and other drugs, was illegal. Two years later, after a long and exhausting trial, Bragazzi was declared not guilty, setting the precedent that ignited cannabis culture’s great expansion in Chile.

The road to social acceptance of marijuana has not been easy. Since 2010, different activist organizations have spread campaigns about marijuana’s medicinal properties to alter the way Chilean society perceives the plant. Exhibitions, fairs, and marches took the national stage (the last one, in late May, drew over 150,000 people) and gradually started shifting the negative opinions about marijuana.

When grannies with joint problems and cancer began to see that marijuana treatments gave them better results than traditional medical treatments everything changed. If older people could change their perception, everyone agreed that widespread acceptance was only a matter of time.

The new way of thinking is that marijuana is not evil, that it can help in many ways. An amazing 70 percent of the population agrees with the use of medical marijuana, and 51 percent is in favor of legalizing it—something pretty weird if you consider that, in the eyes of Chilean authorities, marijuana is a type-1 drug, right next to opium, morphine, cocaine, and heroin.

Almost a decade after the prosecution of Bragazzi, the first Chilean marijuana fair was held. Expoweed 2013 was the meeting place for more than 20,000 people, who for the first time could share knowledge and experiences related to marijuana. It was also the first meeting between domestic trade and foreign investors who saw how Chile was becoming an increasingly interesting market. Since then, one way or another, all major seed banks of Europe have become a presence in more than a thousand legal grow shops all over the country, and also in more than a thousand forms of illegal trade that doesn’t pay taxes.

In Santiago alone, there are more than 500 grow shops. This explosive expansion that has occurred since 2010 has exceeded all projections. To Bragazzi, the reason why is clear: The marijuana community simply overwhelmed the authorities. What once was considered perhaps a trend it is now here to stay.

Five or six years ago, you had to be brave to start a grow shop because police chased you and put you in jail, but not anymore. There is a growing demand for indoors and homegrown marijuana, and as long as it’s there, we will continue to see grow shops, smart shops, and paraphernalia shops popping up everywhere.

We keep walking and arrive at “Portal Lyon,” a famous strip center that not long ago was an iconic place to buy comics, get tattoos and piercings, and find “underground” fashions. But that was long ago. Now, out of the approximately 50 shops inside, over 20 of them are exclusively dedicated to cannabis-related products.

The ongoing fight for legalization

However, this cannabis avalanche has brought to light the issue of regulation of self-cultivation and possession of marijuana plants. What once was not even spoken, now it’s a bill that’s being discussed in Congress and it will allow to have up to two grams of marijuana in possession and six plants per house. If the bill is to be approved, expert opinion is transversal: We will see more and more sophistication and interest in marijuana, following the line of the great cultural change that has already been brewing in Chilean society regarding the use and possession of marijuana.

In a five-block walk, we cross over 40 grow shops and head shops. Seeds, bongs, pipes are beautifully displayed on their shelves of a city that still considers weed illegal. So, the future remains uncertain. What will happen when the plant becomes legal?

I'm a Chilean trilingual journalist (English, Spanish, Finnish). I'm also the creator of En Volá (Something like "While High" in Spanish), an online community of reviews, jokes and funny thoughts, with a fast growing number of followers in social networks. As a journalist, I've specialized in chronicles, articles, columns and humorous scripts for TV. I recently published my first book, a theatre play named "La Casa del Sordo".