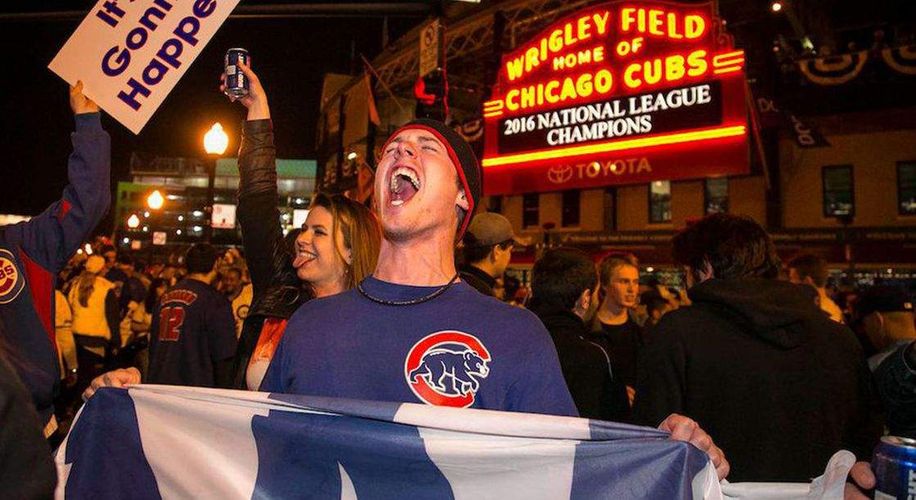 A 5-0 victory over the Los Angeles Dodgers brings the Cubs one step closer to ending the longest drought in the history of professional sports.

A 5-0 victory over the Los Angeles Dodgers brings the Cubs one step closer to ending the longest drought in the history of professional sports.

The streets of Chi-town were certainly lit this weekend as America’s most beloved and once-cursed baseball team, the Chicago Cubs, defeated the Los Angeles Dodgers 5-0 in Game 6 of the National League Championship Series, sending their team to the World Series for the first time in 71 years. Now, they will have the opportunity to win their first title since the year 1908, which took place a whopping 108 years ago.

Starting tomorrow night, the Chicago Cubs will go head-to-head with the Cleveland Indians, a team that has coincidentally not won the World Series since 1948, giving them the longest drought in the American League division. All in all, the championship matchup between the two teams is poised to be historical regardless of the outcome.

But while the Indians have made history of their own by making it to the World Series, all eyes are on the Cubs, who have a chance to end the longest and most talked about drought in all of sports history. Not only are they favored to win it all, they also have the support of Democratic presidential nominee Hillary Clinton, as her aide Nick Merrill shared a photo of her shocked reaction to the news that her hometown Cubbies were going to the championship.

That look when you cap off a day on the trail by watching the @Cubs cement their trip to the #WorldSeries. #FlyTheW pic.twitter.com/94KMWpKHwe

After their victory over the Dodgers on Saturday night, thousands of fans clamored together to celebrate their team, most of which were beyond excited to see the Cubs in the World Series for the first time in their lifetime. The so-called ‘curse’ was started back in 1945 by a Chicago tavern owner named  Bill "Billy Goat" Sianis, who supposedly hexed the team after they wouldn’t let his pet goat into Wrigley Field to watch the championship matchup against the Detroit Tigers.

Despite their historic drought, the Cubs have remained one of the most beloved teams in all of America, especially in the eyes of famous comedic actor Bill Murray. After the victory, Murray made a surprise visit to the White House briefing room dressed in his Cubs jacket, where he answered questions from the press corps about his team’s chances against the Indians. Other celebrating celebrities included Eddie Vedder, John Cusack, and many more.

Though the city of Chicago was certainly ecstatic about the Cubs’ first National League pennant since 1945, the reaction was nothing compared to how it will be if they manage to win it all over the next few weeks. A World Series victory by the Cubs would end a historic 108 year drought, and this fact will certainly send television ratings through the roof. But more importantly, a victory would ignite one of America’s largest cities into a heavenly frenzy like never seen before, giving fans the first World Series title of their lifetime. Needless to say, a majority of America will likely also be riding the Chicago Cubs bandwagon pretty hard.