CULTURE
Cannabis Icon Jane West Looks Back on Five Years in the Pot Industry
AD
“On the five-year anniversary of my cannabis career, I want to tell the story in my own words of how, step by step, I got to this point... screw-ups, dead ends, and all.”
Published on November 14, 2018

This article was originally published on Jane West’s website, and is being re-published here on MERRY JANE with the author’s permission. For more on Jane West, visit her website here.

I sat on the hard wooden bench in the cramped, sterile courtroom, every nerve in my body tingling with anxiety, waiting for the court officer to call my name and read me the criminal charges that had been levelled against me.

After dropping the kids off at camp that sunny June morning in 2014, I’d driven to the courthouse decked out in a pencil skirt and professional shirt. I’d walked through the heavy glass doors – then immediately walked back out. The metal detectors, X-ray machines, and heavily-armed officers inside had reminded me I had a bit of cannabis flower in my purse. After stashing the weed in my car, I’d made it through the security screening and forceful pat-down and now here I was, sitting in the courtroom, feeling overdressed and underprepared.

I had been ridiculously naive. Even driving to the courthouse, I hadn’t taken seriously what was about to happen. I’d approached the situation like just another item on my to-do list: “Attend pre-trial court appearance.” Now reality had sunk in. This was a place where I and every other defendant was not in control. This was where things could go very, very bad for me.

My lawyer, a wizened old criminal defense attorney who had a track record of defending guys on death row, had met with me the week before at a law office in a quaint Victorian mansion. There, he walked me through the technical aspects of this court hearing: What his approach would be, what the judge would likely say, how much it would all cost me. But I hadn’t spent any time at all preparing for just how terrifying this experience would actually be. Many of the other defendants in the courtroom waiting to be called up were in handcuffs and jail jumpsuits. Among all of us, the stress and anxiety of this place, of this process, was palpable.  I had never in my life been arrested, never before been charged with a crime. Now, as a working mother with two kids, I had — at least technically — become a criminal. 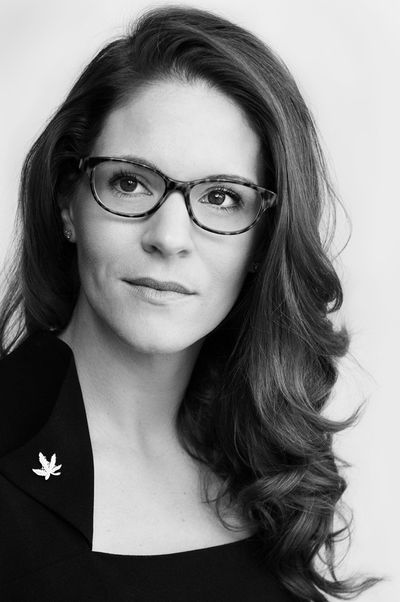 Everything had gone wrong the month before on Easter Sunday. One moment I was proudly hosting a cannabis-friendly brunch at a small Denver bakery, the latest successful project of Edible Events, the cannabis event production company I’d thrown myself into since I’d lost my corporate day job a few months earlier — after my boss spotted me smoking a cannabis vaporizer on CNBC. The next moment, the bakery was swarming with SWAT team officers, dressed in all-black gear and armed with semi-automatic rifles. That’s when the well-dressed man I’d just been talking to revealed he was an undercover Denver cop and I was being charged with serving alcohol without a license.

It’s amazing how everything you work so hard to build can so quickly fall apart. As brunch guests were ignominiously shown the door, the officers slapped the bartender I had hired with a hefty ticket and told the bakery owner she could lose her operating license. After that, she would never work with me again. My family and I had been planning enjoy a happy Easter dinner together. Instead I returned home a disheveled, shell-shocked mess.

Back at the courtroom, I was waiting and waiting and waiting for my turn. Finally, after it seemed like I’d passed a small eternity on the courtroom bench, the court officer called my name: “Dannemiller!” I stepped up to the podium in the center of the courtroom alongside my lawyer. Overwhelmed by the moment, I don’t remember all the specifics of the legalese that passed back and forth between the somber judge and my practiced attorney. I do know there was a problem, a paperwork issue, and my hearing had to be rescheduled for a later date.

Before I knew it, I was in the hallways outside the courtroom with my attorney — where I started crying hysterically. I knew I was incredibly fortunate compared to nearly everyone else who’d pass through the courthouse that day. I was white and privileged and would be returning to my comfortable house — not some sterile jail cell. But that didn’t stop the tears. My lawyer hustled me into an out-of-the-way meeting room, where I bawled and bawled. What was I doing here?! How had I done this to myself?!

Since I first entered the cannabis industry five years ago, I have been incredibly, inconceivably lucky. I launched a pioneering cannabis event companies, pulled off hosting the world’s first marijuana-friendly symphony concerts, founded Women Grow, and now helm a lifestyle company that is helping to redefine the cannabis experience. Media outlets around the world have featured me as an example of a successful cannabis entrepreneur and I’ve been repeatedly called the Martha Stewart of cannabis. But in truth, I’m less like Martha Stewart and more like Hunter S. Thompson engaged in a drug-fueled reimagining of Crate and Barrel. For every successful event I’ve hosted or new career goal achieved, there have been endless kids soccer games missed and minor family emergencies during which mom was once again MIA.

Yes, every moment of my experience as Jane West has been an extraordinary experience. But that doesn’t mean it hasn’t also at times been horribly, terrifyingly messy.

That’s why I’m writing this blog series. On the five-year anniversary of my cannabis career — not to mention the five-year anniversary of Colorado’s launch of the world’s first legal cannabis industry — I want to tell the story in my own words of how, step by step, I got to this point... screw-ups, dead ends, and all. Over the next few months, I’ll recount the crazy, thrilling, and sometimes shocking things I’ve experienced over the past five years — and what, if anything, I’ve learned from them.

In part, I’m writing this series for selfish reasons. I’m usually so busy trying to balance my work and home life that I don’t have much time to step back and appreciate how far my colleagues and I have come in this crazy new industry in such a short period of time. But I also wanted to share my unvarnished experiences for others embarking on similarly uncharted paths. I want to show people that, yes, things get difficult — often incredibly so — but that’s OK. Just keep your head down, focus on your goals, remember to have some fun, and you’ll make it through in one piece. Even if you find yourself in criminal court, bawling your eyes out.

Visit www.janewest.com for more on Jane.

LEGALIZATION
BUSINESS
CELEBRITIES
HISTORY
MORE...
Jane West
FOLLOW
Jane West is the founder of Women Grow, the cannabis industry’s largest professional networking organization, and is now the CEO of her eponymous cannabis lifestyle brand Jane West. At Jane West, she develops accessories and home goods that invite mainstream women to experience the benefits of cannabis and take part in the legal lifestyle. Visit www.janewest.com for more on the living legend.
Share this article with your friends!
AD
By using our site you agree to our use of cookies to deliver a better experience.
Accept
Decline
MORE FROM MERRY JANE