CULTURE
Can You Really Infuse Psilocybin into Coffee and Teas?
AD
A few months ago, a Denver coffee company made headlines after announcing it would look into how to microdose coffee beans with the psychedelic compound of magic mushrooms. But is it possible, and if so, how can it be done?
Published on October 2, 2019

Sträva Craft Coffee, based in Denver, is known for producing some damn fine cups of CBD-infused brews. And, if all goes well, some day in the not-too-distant future the company will be selling bags of psilocybin-infused coffees and teas right alongside its CBD roasts.

But can psilocybin, the magical compound in “magic mushrooms,” be infused into coffee beans the way CBD can? Given what we currently know about the molecule, it’s possible. But until more technological advancements happen, those drinks may not have long shelf lives. 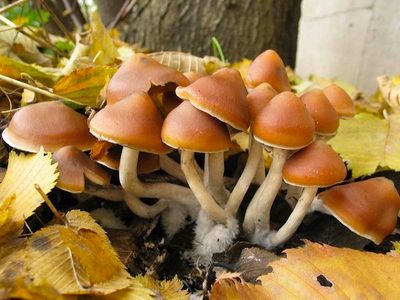 CBD is a relatively stable molecule, meaning that when it’s put into food, it will likely remain CBD for years afterward. Comparatively, the psilocybin molecule is unstable, especially after it’s been extracted with water. A 2006 study found that psilocybin only remains stable for up to a week in water-based mixtures, then it degrades into other chemicals.

That instability means psilocybin — and its metabolite, psilocin, the compound that actually makes people trip — will quickly break down into non-psychoactive compounds once extracted with water and left at room temperature. In other words, these trippy compounds are unsuitable for crafting infused coffees with long shelf lives — you know, like the bags of morning roast you see at Starbucks or the bottles of caramel iced coffees you can buy at any grocery store. 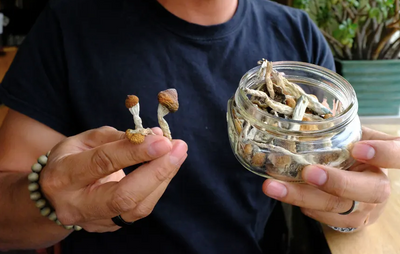 Andrew Aamot, the founder of Sträva Craft Coffee, is fully aware of this molecular predicament. In fact, it’s the main challenge he faces as he attempts to create a new product for a market that doesn’t exist yet. And for the record, Aamot isn’t trying to get everyone in Denver to hallucinate on his coffee. Rather, he plans to microdose psilocybin into the beans or beverages. That way, customers could (in theory) benefit from the compound without experiencing its more pronounced effects.

“The technical hurdles, in addition to the legal hurdles, are ones that we’re tackling internally with our team of scientists,” Aamot told MERRY JANE over the phone. “We don’t have a prototype. We don’t have a solution to some of those challenges, but as we invest in that, those are things that we will protect as trade secrets.”

Currently, Sträva is taking advantage of Denver’s recent decriminalization of psilocybin-containing mushrooms. In May, the Mile High City lived up to its namesake by banning local authorities from prosecuting “personal users” of magic mushrooms. Adults 21 and over within Denver city limits may possess, cultivate, or even donate ‘shrooms to other adults. But they cannot sell the funky fungi — or its extracts or infusions.

“Our local health department called to let us know that they had received an inquiry, and they wanted us to know that it was not legal to put psilocybin in our coffee and sell it,” Aamot recounted. “And we are fully aware of that,” he added with a chuckle.

Aamot expects Denver, or perhaps the entire state of Colorado, to one day legalize psychedelic mushrooms just as it did with weed. By formally legalizing (rather than decriminalizing) psilocybin, regulations would presumably permit the sale of ‘shrooms and products containing the magic compound.

Until then, however, there are no city rules banning research into psilocybin. So...

How Psilocybin-Infused Drinks Are Made Today

People have been tripping balls on mushrooms for millennia. Terrance McKenna, the guy who came up with the “Stoned Ape” theory, suspected that the Greek philosophers Plato and Aristotle may have consumed Psilocybe cubensis as part of a regular cultish ritual. On the other side of the planet, the Aztecs used to take something called teonanácatl, which means “flesh of the gods,” that may have been psilocybin mushrooms.

And since humans are a crafty species, naturally, we figured out ways to mix magic ‘shrooms into our food. To get some insight into psilocybin-infused drinks, MERRY JANE reached out to Virginia Haze, one of the two minds behind the psychedelic cookbook The Psilocybin Mushroom Bible and The Mushroom Bible Instagram account.

“Most people who've taken shrooms before will have made their own mushroom tea; next to just chomping down on the dry or fresh product, it's probably the most popular way of taking shrooms, and the extraction in that process is of psilocybin into hot water,” Haze wrote to MERRY JANE in an email. “Because this works (compared to, say, THC, which must be extracted into a fat because it's oil-soluble and not water-soluble), it's very easy to extract psilocybin into any drink that is water-based, including coffee and tea.” 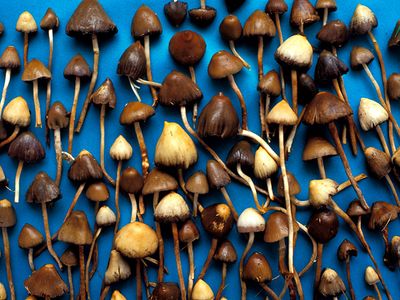 On that same note, it's because coffee and many teas are acidic that psilocybin also doesn't last long in those beverages. As we stated earlier, the molecule is naturally unstable. So the infusion may not pack a punch after a few days of sitting on a shelf.

“That's why we always recommend consuming all infusions ASAP,” Haze added, “at least until we have more research done on how all this works at a chemical level.” 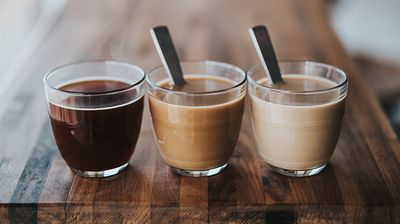 Freshly infused, microdosed coffees and teas may be Sträva Craft Coffee’s only option for selling a psilocybin beverage once it goes legal. Andrew Aamot acknowledged this, too.

“Shelf life is often assumed to be a long time, but it could end up being more of a fresh product that has a limited shelf life and needs to reach consumers within a week or two,” Aamot explained. “When you go into the grocery store, almost everything has a shelf life of about a year or longer. But we don’t have to assume that’s the case for a product of this type.”

Even without a special recipe to prolong shelf-life, there are some tricks that Sträva — or anyone else making psilocybin-infused beverages — could employ to preserve their drinks’ trippability. For more info, we spoke to Savino Sguera, an analytical chemist and chemical engineer who founded Digamma Consulting, a scientific consulting firm for the US cannabis industry. Long before starting as Digamma’s Chief Science Officer, Sguera worked in the lab of Dr. Alexander Shulgin, a legendary chemist who devised straightforward methods to synthesize drugs like MDMA, “foxy” (5-MeO-DIPT), and pretty much every psychedelic you can think of.

So, Sguera knows a thing or two about psilocybin’s chemistry, too. He said one simple way to prolong psilocybin’s shelf life is to keep it cold. Really, really cold.

Gallery — Mushrooms and Weed Are All You Need

“Say someone made a tea out of it, I know that tea would only last a few days in a refrigerator,” Sguera said to MERRY JANE. “Now, if it were frozen, that’s a different story. If the tea were frozen, it would have a much longer shelf life.”

As for how long, he couldn’t say, since there haven’t been many studies on freezing psilocybin.

In addition to avoiding heat — even ambient, room-temp heat — keeping psilocybin-infused beverages away from light will preserve their contents, as well. That could include storing the products in dark rooms, or packaging them in opaque materials.

And if we’re getting technologically savvy with preserving psilocybin, it’s possible that either psilocybin or psilocin could be chemically modified, either by attaching new molecules to the compounds or mixing them with other chemicals like ascorbic acid (i.e. vitamin C), to make them more stable. However, Sguera wasn’t aware of any realistic chemical modifications for psilocybin that could extend its shelf life. 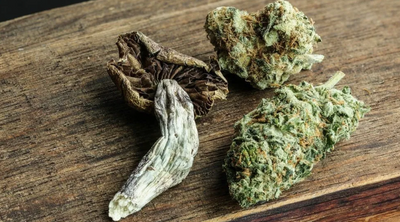 Of course, none of this suggests that ‘shroom-infused coffees or teas with long shelf lives are impossible. After all, there was a time when no one thought that THC or CBD from cannabis could be infused into water-based drinks, yet here we are today with a weed drinkables market. It’s entirely possible that some clever scientist (perhaps at Sträva) will someday devise a way to make this happen.

Until that day comes, Aamot at Sträva is keeping things chiller than an iced mocha. He said that even though his company’s psilocybin project has made international headlines, it’s not a priority for him or the company at the moment.

“I focus more on our day-to-day operations,” Aamot said about Sträva. “The psilocybin activity is something we do in the background. I’m not in a hurry to do it.”

RESEARCH
MAGIC MUSHROOMS
PSYCHEDELICS
MUSHROOMS
MORE...
IN THIS STORY
CBD
Click to shop at our CBD store
Randy Robinson
FOLLOW
Based in Denver, Randy studied cannabinoid science while getting a degree in molecular biology at the University of Colorado. When not writing about cannabis, science, politics, or LGBT issues, they can be found exploring nature somewhere in the Rocky Mountains. Catch Randy on Twitter and Instagram @randieseljay
Share this article with your friends!
AD
By using our site you agree to our use of cookies to deliver a better experience.
Accept
Decline
MORE FROM MERRY JANE