CULTURE
Can You Get High From Too Much CBD?
AD
Some folks say they catch a buzz from pure CBD. But cannabidiol isn’t technically supposed to get anyone high. Do these claims have some basis, or are they examples of pot placebos?
Published on May 15, 2019

CBD doesn’t get anyone high, right? That’s the mantra, anyway.

It started as a whisper at the fringes of medical science, amplified over the years by a swelling chorus of cannabis activists, patients, and their advocates. Then the media began shouting that it doesn’t get people high. And, before we knew it, CBD popped up in drugstores and suburban kitchen cabinets. Now the cannabinoid is infused into everything from hummus to underarm deodorant.

But some suspect this alleged wonder drug — which offers the plant’s medicinal benefits and none of its stoney side effects — can, indeed, get them a little buzzed.

MERRY JANE previously touched on this question, but let’s dive deeper into CBD and psychoactivity. 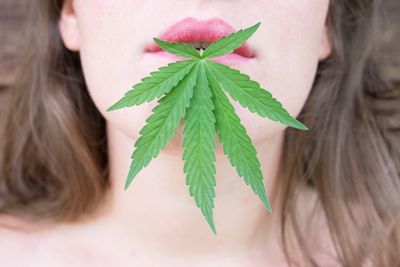 Rudy Sta Ana, the founder of Cannabis Catered Events, works as a fusion weed chef in California. In March, he told MERRY JANE he snorted CBD isolates twice in his life. In both instances, he said, “It felt like a euphoric boost and just made me feel great. It didn't last very long, though.”

“That’s a real thing,” Dr. Ethan Russo, a neurologist who’s been studying cannabis for over two decades, said to MERRY JANE in a phone interview. “In terms of alertness, the feelings of well-being, lack of anxiety, antidepressant effects — those are all proper, well-established pharmacological effects of CBD.”

However, Russo added, “I’m assuming this is pure CBD, and there’s no THC in it.”

The purity of isolates should be guaranteed on the labeling. In reality, CBD products aren’t regulated by the FDA, and no lab testing standards exist for accurately detecting plant-derived THC or CBD. So it’s possible that Sta Ana, and others like him who’ve taken CBD recreationally, may be feeling something because the CBD product contains enough THC (or some other adulterant) to trigger an uplifting effect.

Additionally, snorting CBD may just be an edgy way of taking it orally, as the CBD product will ‘drip’ from the sinus cavities into the throat, where it’s swallowed.

What the Science Says About CBD’s ‘High’

Two studies indicated that CBD taken orally could convert to THC in the stomach’s acidic environment. Even Raphael Mechoulam, Ph.D, the “godfather of cannabis science,” owns a patent to turn CBD into THC with strong acids. However, the two studies only observed a small amount of CBD converting to THC, somewhere around 4 percent.

In other words, most folks should get decently stoned from 250 milligrams of CBD, which we know doesn’t happen. The researchers from both CBD conversion studies didn’t use living beings for test subjects, either. They did it all in lab equipment using artificial acids that simulated gastric juices. So it’s more probable that CBD doesn’t turn into THC in the human stomach.

On the other hand, if THC is combined with CBD, CBD can alter THC’s effects on the mind.

“It is a slight effect,” Jahan Marcu, Ph.D, the chief science officer at the International Research Center on Cannabis and Mental Health, explained to MERRY JANE. “But it’s not intense.”

Like Russo, Marcu noted that the current body of scientific literature shows CBD can affect a THC high, and not just for tapering anxiety caused by too much THC. For instance, when taken orally, CBD can slow THC’s progression through the blood and brain, leading to longer-lasting highs.

How does CBD do this? The liver contains several enzymes that break down roughly 60 percent of all drugs known to humanity. CBD can prevent these same enzymes from breaking down delta-9-THC when someone smokes weed. If someone eats an edible, CBD will also slow the metabolism of 11-hydroxy-THC, the version of THC made in the liver when weed is consumed orally.

“I would stress that combining administration forms does matter,” Marcu continued. In other words, whether the CBD is smoked, dabbed, eaten, or applied topically could affect psychoactive outcomes. “Science is playing catch-up with how people are using these products. As far as I can tell from the literature, the effect that CBD has on increasing the intensity of THC is not huge.”

On that note, the liver-enzyme-inhibiting thing doesn’t happen if someone inhales CBD, such as when dabbing isolates or smoking hemp flower. How could tokers feel euphoric from smoking or dabbing CBD, as Sta Ana reported? 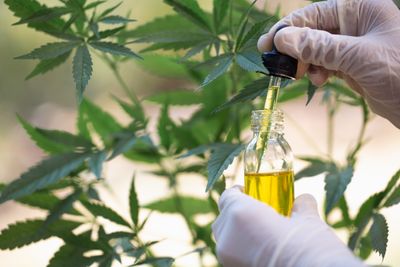 Marco Troiani, an organic chemist and CEO of Digamma Consulting, thinks CBD could, theoretically, get someone slightly buzzed by “boosting our natural endocannabinoid, anandamide,” which is believed to behave much like THC in the body.

To keep us from getting unintentionally stoned off our own body chemistry, we evolved an enzyme, FAAH, to metabolize anandamide. Yet CBD seems to inhibit this enzyme as well.

“Both THC and CBD end up activating the CB1 receptor,” Troiani told MERRY JANE. “THC does it directly,” but CBD could get someone buzzed in a roundabout way by causing a buildup of anandamide in the brain.

However, Troiani only proposed the idea as a possible way CBD could get someone high, if even just a little. He’s not convinced of the hypothesis, though. At least not without more data.

“If you suppress the ability to clear estrogen and dopamine, which is part of why people love CBD so much, you also suppress testosterone and serotonin from correct functionality,” Young told MERRY JANE. Aggression caused by heavy dabbing of extracts or isolates, he added, is the equivalent of a weight lifter’s ‘roid rage caused by testosterone abuse.

There is some evidence that cannabis use can affect hormone activity, but a recent literature review found that research on hormones and CBD is severely lacking. 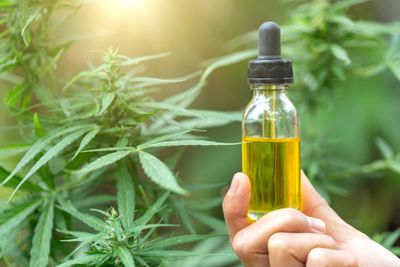 Or, Maybe, We Don’t Know Enough to Say with Certainty

Before you drink an entire bottle of CBD tincture to see if it’ll get you wasted, consider that the body’s response to CBD is dose-dependent. Numerous pharmacological studies show that CBD behaves according to a “dose-response curve,” which is science jargon for, “taking more CBD than needed will do absolutely nothing” regarding desired effects.

One study tested mega-doses of CBD in public speakers. Speech givers rated their anxiety levels before, after, and during public speaking events after taking 150, 300, and 600 milligrams of CBD. The most effective dose was at the low end, at 150 milligrams. Higher doses seemed less effective, though were still more effective than no CBD at all.

Another study involved mice. Researchers induced vomiting in the mice by feeding them a non-lethal poison. Some mice were given small amounts of CBD; others were given larger amounts. The mice given small amounts of CBD vomited less than the control mice that didn’t get any CBD. However, mice given large doses of CBD vomited more than the other two groups, suggesting too much CBD made the poisoned mice sicker than the ones who weren’t given any CBD.

Yet another study with rodents, this time with rats, used THC and CBD injections to see how the two compounds interact. According to Russo, the study breaks down like this:

- If CBD is taken before THC, it can taper or “eliminate” the THC high

- If CBD and THC are taken at the same time, CBD reduces the peak high and prolongs its effect longer than THC alone

- If CBD is taken after THC, no behavioral effects were observed

But Russo cautioned against drawing conclusions about CBD’s purported “high” from rodent studies.

“Mice are not appropriate test subjects” in this sense, he said. “They barely have a cerebral cortex, and behaviorally, they’re not like people. Mice can’t talk to us and tell us how high they are.”

Cannabis has been studied for well over a century, but thorough research on the plant is still in its infancy due to old, stuffy federal laws. As legalization becomes more mainstream, we’ll likely get some closure on whether CBD can get someone lit. But until then, consume responsibly, and for the love of all that’s good, please don’t swill an entire bottle of CBD when a hit of THC can get the job done.

CBD
SCIENCE
HEMP-DERIVED CBD
CBD EDIBLES
MORE...
IN THIS STORY
CBD
Click to shop at our CBD store
Randy Robinson
FOLLOW
Based in Denver, Randy studied cannabinoid science while getting a degree in molecular biology at the University of Colorado. When not writing about cannabis, science, politics, or LGBT issues, they can be found exploring nature somewhere in the Rocky Mountains. Catch Randy on Twitter and Instagram @randieseljay
Share this article with your friends!
AD
By using our site you agree to our use of cookies to deliver a better experience.
Accept
Decline
MORE FROM MERRY JANE