CULTURE
Can Synthetic Urine Really Beat Drug Tests?
AD
The short answer is: It depends on the product, and it depends on which lab is doing the test.
Published on September 20, 2019

Mandatory - or worse, random - drug screenings leave all tokers wondering how to pass a drug test. Besides being unnecessarily invasive, drug tests are one of the easiest ways for most employers to legally discriminate against otherwise productive, law-abiding workers. So, what happens when one of these drug tests are coming up, but your marriage to Mary Jane trumps your loyalty to your job?

For a lot of potheads, what happens next may sound gross, but it has worked for some folks in the past: Strap a small plastic bag or condom filled with someone else’s (preferably clean) pee to your leg, sneak it into the drug testing facility, and hope no one sees you snake that stuff into the collection cup.

Or, if you don’t happen to know anyone who’s chronically sober (and that’s to be expected in our circles), you can buy some fake, synthetic urine to fool the drug screens. But do these products actually live up to their chemist-foiling claims, or are they just another way for marketers to sell us empty hopes and dreams?

But, before we dive headfirst into an ethically questionable topic, here’s a quick disclaimer. In some instances, trying to fool a drug test can be a crime, especially if you’re peeing in a cup because your parole officer told you to, or because it was ordered by a judge. If you try to cheat a government agency, you could be facing prison time for fraud, among other potential crimes. So, if you’re on judicially mandated time-out, so to speak, don’t mess around here.

Additionally, although it’s not illegal to cheat a drug test ordered by an employer, it could result in losing your job. In fact, if you’re caught, it’s considered an automatic fail at most labs, which essentially means the laboratory – and your employer – will assume you were bumping ketamine and boofing cocaine all weekend. 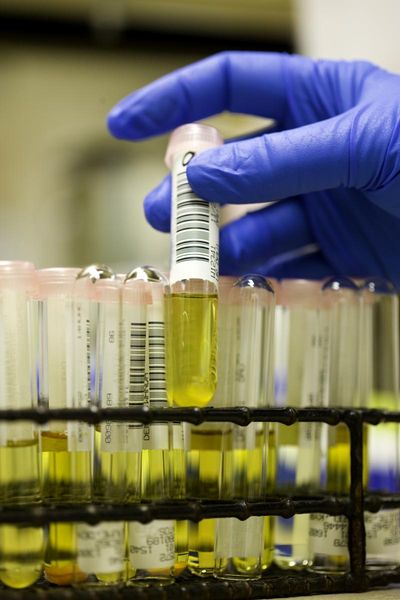 To start off, what, exactly, is synthetic urine? Real human urine is mostly made of water, but it also contains salts, sugars, and proteins excreted by our organs as waste. Synthetic urine is also made mostly of water, but it contains many of the same compounds found in genuine urine. And best of all, it doesn’t contain any THC or THC metabolites, the little chemical buggers that the drug lab is looking for.

But why drop cold, hard cash on synthetic urine when you can just add yellow food dye to some tap water?

Chemists aren’t stupid, and tokers have been trying to cheat their tests since the first ones rolled out decades ago. So, while the lab may be looking for drugs in your pee, that’s not all they’re looking for. They’re also looking for other markers that verify the sample actually contained urine in the first place. Some of those markers include pH levels, temperature (it better be body temperature or close to it), and creatine content.

Synthetic urine manufacturers claim that their products meet all of these criteria: The fake stuff should still feature the same colors, transparencies, salts, and creatine and pH levels as real urine. That’s why folks sneak this stuff in strapped to their leg: By keeping the sample close to the body, it should maintain body temperature, as well. In fact, some synthetic urine kits come with an entire leg-strapping, heated padding system, for your convenience, of course.

With these in mind, synthetic urine has beaten some drug testing labs. In fact, the drug screening industry recognizes it as a huge problem (for them), which is why pouring fake pee into a cup may not get you off the hook. 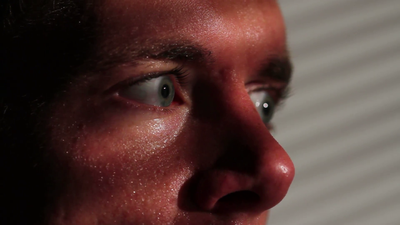 In the drug screening industry, there’s a perpetual game of cat-and-mouse among drug test manufacturers and people who, y’know, like to do drugs. As the psychonauts cleverly devise new ways to beat the tests, the testing companies figure out ways to detect the cheats. As the tests become increasingly fool-proof, someone comes up with another trick to ultimately fool those tests, and the cycle continues.

But drug screeners aren’t only trained on how to analyze the samples. They’re trained to recognize foul play, too, from the moment you step into the clinic, to when you’re actually doing the deed in the bathroom, all the way up to the very second you place that sample into the technician’s gloved hands. They’re assessing the sample on its temperature, they’re looking for prints of bags, straps, or tubes poking through your pants, and they’re observing any other giveaways, like whether you’re sweating profusely, speaking nervously, or if you just came in reeking of skunky-ass weed.

Since most legit, respected labs utilize the newest equipment and the latest drug-screening techniques, which includes sizing you up and watching you closely for any signs of cheating, you probably shouldn’t bet any money, your career, or your freedom on synthetic urine.

Gallery — Did You Know These Celebrities Smoke Pot?

Position #3: Synthetic Urine Works, but You Need Lady Luck on Your Side, Too

In reality, not every drug screening lab has the latest and greatest gadgets for catching cheaters. Nor is every lab employee operating at 100-percent capacity at all times. Drug labs are incredibly busy these days, and many screening companies will process hundreds — if not thousands — of samples in a day. There’s a good chance someone may slip up somewhere along the drug testing process, and if you inadvertently happen to dip into some of that luck, you can skate by scott-free.

Furthermore, not every lab is equipped to recognize the latest synthetic urine formulas. Whether the lab you go to is up-to-date or lagging behind is a crapshoot, and you can guarantee none of them will tell you whether or not they can determine if you gave them fake urine. (In fact, even asking that question is certain to result in an automatic failure.)

So, in reality, there’s a chance that fake urine could work in your favor. But if you decide to go this route, make sure your fake peepee product was actually designed for drug screens and not for kinky bedroom excursions. A lot of synthetic urine manufacturers sell their products to the watersports market (and I’m not talkin’ about jet skis here), so there’s a good chance the synthetic urine for golden showers doesn’t contain stuff, like correct creatine levels, found in human urine.

CULTURE
SEO
DRUG TESTING
URINE TESTS
MORE...
IN THIS STORY
CBD
Click to shop at our CBD store
Randy Robinson
FOLLOW
Based in Denver, Randy studied cannabinoid science while getting a degree in molecular biology at the University of Colorado. When not writing about cannabis, science, politics, or LGBT issues, they can be found exploring nature somewhere in the Rocky Mountains. Catch Randy on Twitter and Instagram @randieseljay
Share this article with your friends!
AD
By using our site you agree to our use of cookies to deliver a better experience.
Accept
Decline
MORE FROM MERRY JANE