CULTURE
“Beyond Buds: Next Generation” Breaks Down the Sticky Secrets Behind Cannabis Concentrates
AD
The latest book from Ed Rosenthal, the "Guru of Ganja," will make anyone an extracts expert, as it details everything from hot knives and hair straighteners to closed loop distillation and diamond mining.
Published on September 5, 2018

Sorry smokers, flower is losing favor. Despite the age-old pleasures found in mastering the perfect roll and clearing a too-big bong hit, oils, waxes, and other vaporizable concentrates are quickly taking up an increasing amount of space in the marijuana marketplace.

But as legalization has made way for advancements in extraction technology that were seemingly unthinkable only a decade ago, it can be hard to keep up with the latest fads in rapid THC delivery, be it distillates, sauce, or crystal clear diamonds.

Thankfully, that’s where Ed Rosenthal comes in. Dubbed ‘The Guru of Ganja,” Ed is one of the founding fathers of High Times and the author of the only cannabis-specific horticulture book to be reviewed by the New York Times, “The Marijuana Grower’s Handbook.” His latest title, “Beyond Buds: Next Generation,” presents an encyclopedic amount of information about the continually emerging world of cannabis concentrates.

To learn more about what’s inside our vape pen, we got on the phone with Ed from California to discuss Beyond Buds, low temp dabs, prohibitionist fear-mongering, weed’s yeasty future, and more. MERRY JANE: Do you remember the first dab you ever did?

Ed Rosenthal: The very first dab I took was more than 20 years ago, between two hot knives. And then before that there was a pioneering oil maker, Pete Sutton, who is now deceased, but he would heat an object like a screwdriver or something and put it into the oil that he made, and then we would inhale the vapor through a straw.

Were you surprised to see the extract science and dabbing community grow so quickly?

I am still surprised. I just came back from a conference covering cannabis science and I couldn’t believe how technical the extraction and processing machinery that was being exhibited is getting. It’s amazing how fast that expansion has occurred. With so much of the equipment, I just had to look and ask, “So what does this even do?”

You’ve written extensively about cannabis, at what point did you know that concentrates would be the subject of your next book?

Well, concentrates were already starting to gain favor when we published the first book, Trash to Stash, in 2002. And that showed people that they could take what was then viewed as waste material, and use it to make concentrated products. From there, extracts science has gotten more and more technical, and the new book, Beyond Buds, reflects that, with a totally different emphasis and quality of information. 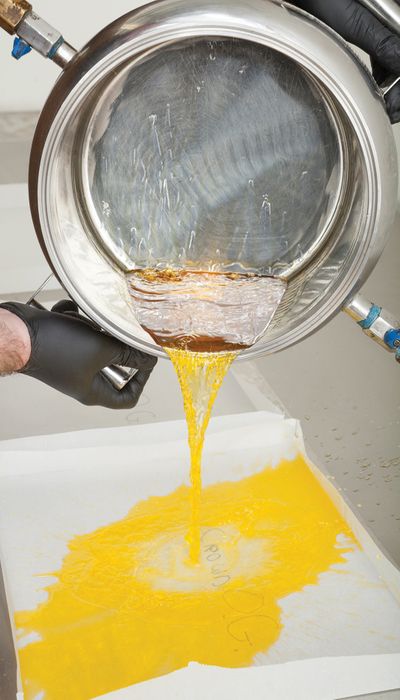 You included breakdowns of concentrate extraction technology as basic as hair straighteners to make rosin, and as detailed as lab-based closed loop systems. How important was it for you to cover the entire range of extraction tech?

That’s how I’ve tackled all of my writing projects. For example in The Marijuana Grower’s Handbook, the information in that book can be used by a home grower, but it is also just as viable for people who are running greenhouses. I’ve always felt it was important not to just segment the books for one group of people, but to make it into a slope, and then it’s up to the reader to decide how high you want to climb. We try to not only give instructions for how to make and use concentrates, but to also explain why we do certain things and what’s going on at every level, so that you have a better understanding of the entire situation.

It is a favorite commentary of prohibitionists to say “this isn’t your dad’s weed” when discussing potency, and today cannabis concentrates represent that reality better than anything. In your opinion, are those talking points misleading?

Before prohibition was enacted, smoking was not the main method that people used to consume cannabis; there were a lot of tinctures and people ate a lot of hash. Smoking remains largely an artifact of prohibition. Before prohibition, it was easy to process, and smoking only became popular during prohibition because it didn’t need the suddenly-risky processing. As long as it was grown, you could use it. Concentrated doses are nothing new.

Really, it’s like going into a bar and having one drink versus going to out to get totally inebriated. It’s a choice that people make. And people can, and usually do, self titrate — so no, I don’t think that cannabis products being concentrated is actually a problem.

But also, using a concentrate, you’re eliminating all of that vegetative matter and open combustion, which certainly isn’t doing your lungs any good. First they would say, “Oh, the smoke is terrible for you,” and now that we’ve eliminated any smoke, it’s “Oh, but it’s too concentrated.” As knowledge of concentrates has evolved, we’ve largely moved away from red hot flames to lower temperatures. Can you talk about why dabbing at 400 degrees is better than 800?

When you get to those higher temperatures, there may be by-products of that burn that aren’t good for you. Getting down to a lower temperature, closer to 400 degrees, the concentrate isn’t burning, it’s evaporating, which is a much better process and doesn’t lead to to that potentially unwanted chemistry that happens with hot dabs.

To make it simple, let’s say you’re frying some food. The temperature of the oil in the pan is about 400 degrees. If you want even crispier french fries, you’re gonna fry them at 450 or so. It’s a temperature that we’re already used to ingesting with our oils. If you set your frying pan at 800 degrees, you’re going to be burning your pan and releasing all sorts of nasty chemicals. 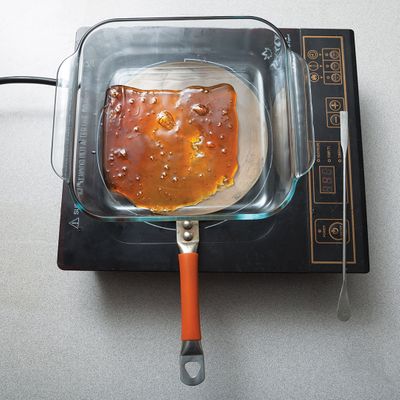 Speaking of chemistry, with the advent of rosin and solventless extracts, butane and other chemical solvents got a bit of a bad reputation with customers. Should consumers worry about residual solvents, or is that overblown?

There’s a lot of discussion about BHO and how much butane is retained in them, and I’m not claiming I have definitive answers to those questions. But on the most basic level, every time you use a lighter to light a joint, you’re inhaling butane, and probably more butane than is left over in any dab. I can’t speak to specific health issues, but it helps to consider what goes into the entire smoke stream, and not just the product itself.

In the same way that extracts magnify THC, CBD, and terpene levels, do dabs heighten the concentration of potential residual plant contaminants, be it pesticides, mold, or otherwise?

That is true. Now let’s talk about mold. I have looked in scientific literature for any kind of pathology dealing with powdery mildew, and I have not been able to find anything. So there are certain things that may concentrate and they may affect the purity, but whether or not they have a pathology to them is something else.

And the other thing is, even if you are vaping material that may not be healthy, if we substitute that contaminated dab and smoke a whole joint, it may not have been concentrated at the same level, but when you look at the total amount of material at the end of the day, and if it came from the same plant, you would be ingesting just as much contamination.

Now, to be clear, I’m not denigrating the argument that we should have purity in our material. Every consumer deserves to have pure product and I think it’s important that we do test for things like concentration of pesticides, because not only are they harmful in their static state, but when they are burned and oxidized, they often become even more dangerous. But when it comes to testing, too, extracts make contamination easier to find because of the concentration. California recently implemented new cannabis testing standards that require product safety in the legal market, but a lot of states don’t have that structure. Do you have any advice for what consumers in America’s remaining black markets can look for or be aware of to avoid potentially dangerous products?

It’s important to note that testing didn’t start as a safety precaution from regulators, but instead from competition between growers. Once one dispensary started advertising THC levels and purity, everyone else started to follow suit. And legal channels will routinely reject bud that isn’t good enough in one way or another, and that of course, eventually gets sent to the East Coast or other black markets.

Marijuana’s supply chain is exactly the opposite of other vegetables. If you go to Mexico, the strawberries that you can get are runts or misshapen, because they ship the best fruits to the U.S. and other export markets. But as far as marijuana is concerned, the best stuff stays here in California, and the rest gets shipped out, without any way to test it. 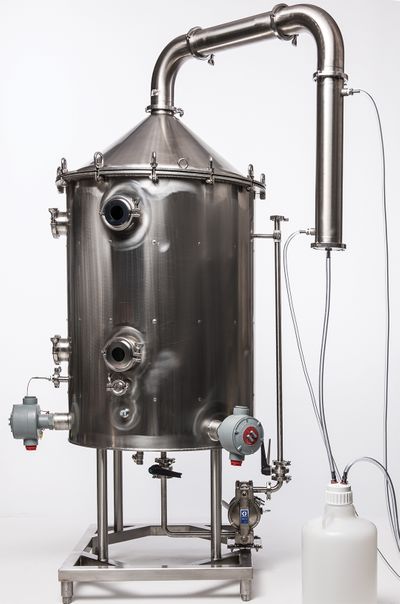 In a few short years, producing cannabis concentrates has evolved from open-blasted backyard BHO to closed loop labs producing water-clear THC and CBD distillates and crystals. Do you think there is still room for extraction tech to grow even further?

I think it’s going to go in a different direction entirely. I think ultimately these products will be made from a yeast ferment instead of a green plant.

Yes, yeast. A lot of medicine is currently made by introducing genetic material to living organisms that then produce the drug in larger quantities. There’s no reason that you couldn’t put a cannabis terpene or THC genetics through a similar process and create concentrates. Yeast has a large enough nucleus to hold all of the genetics needed to start from common chemicals to eventually expressing THC. And the product they produce would be, essentially, beer until you purge the excess off. And the same way that chemists are able to extract hops from beer, you would be left with extremely pure THC.

Do you think concentrates made from yeast will be available in legal markets relatively soon, or only after eventual federal legalization?

There are companies already working through the process, and I don’t know how long until they will be available. But it’s been done with so many other products that to transfer the chemistry to cannabis would not be jumping over any extraordinary bar. Prohibition started in 1912 in California, and in the grand scheme of things, 100 years isn’t that long. Lots of things have been held back for a century or so, but life moves on. 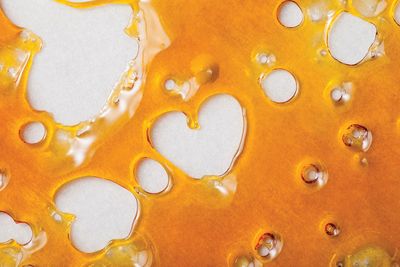 “Beyond Buds: Next Generation” is available now, order your copy here

AGRICULTURE
420
TECHNOLOGY
INTERVIEW
MORE...
IN THIS STORY
CBD
Click to shop at our CBD store
Zach Harris
FOLLOW
Zach Harris is a writer based in Philadelphia whose work has appeared on Noisey, First We Feast, and Jenkem Magazine. You can find him on Twitter @10000youtubes complaining about NBA referees.
Share this article with your friends!
AD
By using our site you agree to our use of cookies to deliver a better experience.
Accept
Decline
MORE FROM MERRY JANE