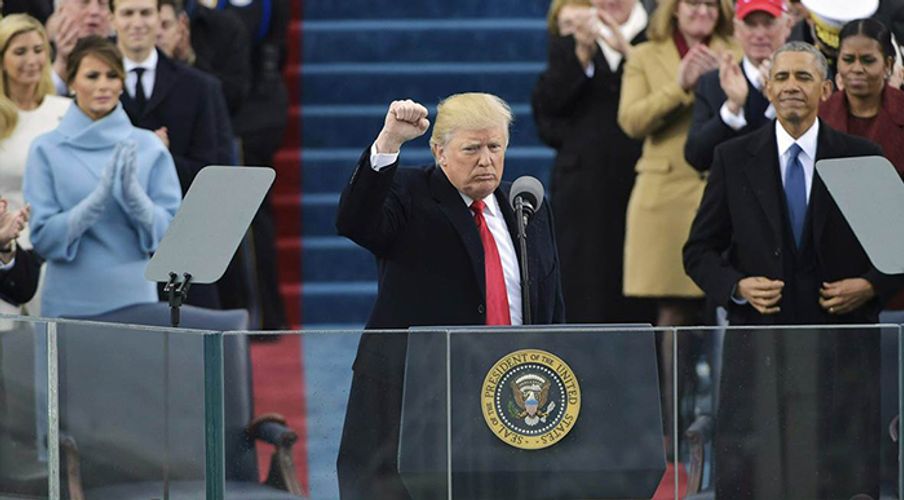 The Best Reactions to the Inauguration of President Donald J. Trump

Laugh to keep from crying.

Laugh to keep from crying.

The world didn’t end on Inauguration Day, but there were anti-Trump protests and turmoil in the streets as Donald Trump officially became the leader of the free world. To cope with Friday’s ceremonies and democracy’s public demise, many of us nervously laughed the pain away before resigning to do everything we can to prevent the new POTUS and his Republican majority from undoing all the progress that we’ve made and making it that much more difficult to achieve the progress we still strive for. Laughter is not only great medicine, it’s also what every other country on the planet is doing at us right now! So, as we join them in “WTF is happening,” we look to the Internet’s great minds to truly satirize this dark, dark day.

For the Trumps and the Obamas, the morning began with tea. (For me, vodka.) During the meeting, social media noticed an incredibly awkward moment when Melania handed Michelle, who strongly denounced the Donald during the campaign, a large box from Tiffany & Co. Michelle’s face was priceless.

*record scratch* *freeze frame* yep. that's me. you're probably wondering how i got in this situation- pic.twitter.com/8lpCnM8rR4

Kellyanne Conway’s outfit was the subject of some criticism. Mainly because it looked like some form of Revolutionary War cosplay. Apparently, the Gucci coat was designed to honor London. Whose side is she on anyway?

Kellyanne Conway’s 18th century cosplay is in honor of the incoming government’s approach to science and women’s health pic.twitter.com/mKFnGYYf8e

There aren't a lot of nice things I can say about Kellyanne Conway but one is I think she would have made a better Javert than Russell Crowe pic.twitter.com/AyEVSZNwDP

Barron Trump’s reactions to the affair were oddly relatable: annoyed and exhausted.

Hillary made her first public appearance since Nov. 9.

As promised, Hillary Clinton is wearing white. White has been a symbol of women's suffrage since 1908. #Inauguration pic.twitter.com/WQx14NZmbx

Of course, all the dignitaries showed up.

But many, many people did not show up. Sad!

The crowd size comparison, from 2009 and today. pic.twitter.com/iMYZy9PRK8

To all those who didn’t watch, an excellent burn in your honor.

Oh wow! "The King and the Chorus Girl" is on @tcm right now! Super-underrated flick. Joan Blondell is amazing!

For others, it was like watching a car crash. You know you shouldn’t look but you somehow just can’t look away.

what a beautiful prayer. makes me wanna grab my puss

TRUMP: Most importantly, we will be protected by God.
GOD: I voted for Hillary.
#Inauguration

A subtle reminder for Trump supporters who are upset about #DisruptJ20. https://t.co/iYCwCczYWB

Why the fuck does Trump do the Italian finger kiss move (👌) with his hands so much? How is THAT one of his default hand postures

People also had some critiques regarding the performances at the inauguration.

Theory: Trump's Romney meeting was about getting the Mormon Tabernacle Choir for the inauguration, not for a cabinet post

Isn't American Carnage opening for 3 Doors Down next week?

@Middleditch Cuttin to the core. Give Trump some credit for creating 5 new jobs because you know those dudes hadn't worked in a while. pic.twitter.com/tIhknugf8t

While others noted the changing of the guard on Twitter.

My goodness this is terrifying pic.twitter.com/HjOHTjxSyD

Following his speech, Donald Trump began tweeting again—first from his own account, then on the newly transitioned @potus account.

This is the picture they CHOSE for his first post. Lol pic.twitter.com/XnKxvaZvRZ

Our old dad checked in on us….

Hi everybody! Back to the original handle. Is this thing still on? Michelle and I are off on a quick vacation, then we’ll get back to work.

It also became clear in the hour following Trump’s speech that he plagiarized a speech from Bane.

This dude is STILL smarter than Trump pic.twitter.com/821RPsGFYg

Bikers for Trump was present, making its “wall of meat” against protesters. When interviewed….

this guy said he "didn't have time 2 protest bc he has a job" UR AT THE SAME EVENT AS THE PROTESTORS. UR ON THE SAME SCHEDULE AS THEM pic.twitter.com/fRRcVJfgnV

Reactions to Trump’s call for “America First” perked the ears of some history buffs….

This protester, at the parade, FTW….

she's my new president now, i don't care what the laws say pic.twitter.com/v4C7dH6wxX