CULTURE
Baked to Perfection: Whip Up Some Weed Blondies Made with Brown Butter (And Love)
AD
If you're looking to take your homemade edibles game to the next level, look no further than Ms. Rachel King's luscious, infused-brown butter blondie recipe.
Published on July 24, 2019

Ask anyone about the first edible they tried to make themselves; and without fail, the answer will almost always be a brownie. The boxed variety, specifically, and undoubtedly a terrible version of that.

Personally, I think DIY pot brownies are pretty overrated. Unless you have a solid cannabutter recipe that works well with chocolate (something only true culinary nerds would put thought into), the terpenes usually never match, and it will have a super grassy, earthy, or limonene flavor that makes me (and probably you, too,) want to gag.

Grass and shitty boxed brownie chocolate? Yeah — no thanks.

That’s why I have to bow down to Rachel King for presenting a solution to both problems in this week’s Baked to Perfection: a brown butter blondie recipe laced with concentrate (a highly underrated form of infusing, by the way). As the founder and culinary director at San Diego-based edibles company, Kaneh, Co., King knows a thing or two about making solid baked goods. In fact, she worked as a pastry chef for over a decade prior to entering the ganja game.

“One of my favorite scents and flavors is brown butter. It is simple to make and really elevates a dish,” she says. “This is a take on our popular blondie, with the additional nuance of the nuttiness of the brown butter. To really make these your own and give them a seasonal spin, top with summer fruit such as peaches, berries or figs. You can also swirl in jam or add in chocolate chips. This recipe is delicious on its own, but versatile enough to tailor to your specific tastes.”

Snag her dope brown butter blondie recipe below, and read on to learn her secrets to cooking with concentrate, the key to nailing the right texture, and the edible that had her glued to the couch laughing. 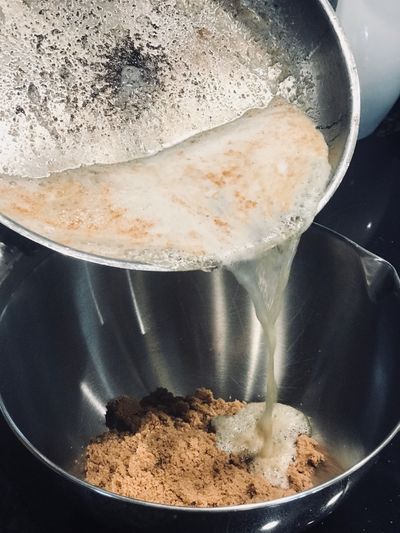 Note: Make sure to measure everything on a digital scale in grams. This ensures accuracy for consistency and dosing. You can use your own cannabutter (sub out for regular butter, gram for gram) or your favorite concentrate that’s been tested to ensure the proper dosage (and purity). For example, if the concentrate you use tests at 90 percent, one gram will equal 900mg. Add one gram to this recipe and each portion will be around 50mg if you cut it into 18 pieces.

- Nectarines and walnuts to garnish (optional)

Melt butter over medium heat and cook until the smell begins to change. The medium brown color at the bottom of the pan will also alert you that it’s time. Remove from heat and set aside. Add concentrate or cannabutter to the warm butter mixture.

Pour into your prepared pan and smooth with a spatula. Sprinkle fruit and nuts on top, then bake for approximately 28 minutes, turning halfway through. The top should be dry and there should be no jiggle in the center of the pan. Let cool completely before portioning.

To plate: I topped them with nectarines and walnuts. But bondies are super versatile. They’re plain but if you have extra fruits or nuts, they can totally be changed for people’s preferences. 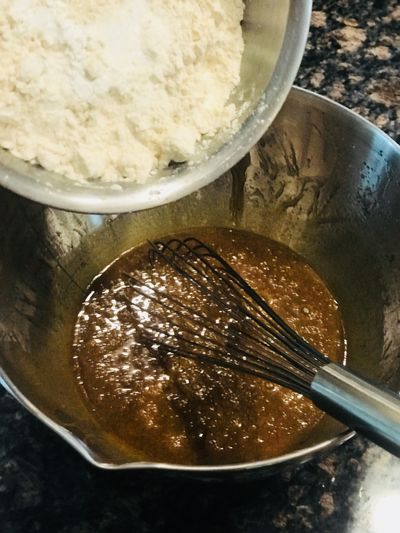 MERRY JANE: Tell us a little bit about what you do in the cannabis world.

Rachel King: I am officially the Culinary Director of Kaneh, Co., but as a co-owner I wear many hats: I help manage many different aspects of our business including the kitchen, sales, inventory, growth, staffing, and strategy. Personally, I am a wife, mother of two adorable little boys, and have two pups. I enjoy outdoor activities, nature, and being physically active in general.

You’ll have to forgive me, but how do you pronounce Kaneh and where does that name come from?

Kaneh (pronounced “canna”) comes from the idea that some scholars believe that cannabis was an ingredient of holy anointing oil mentioned in various sacred Hebrew texts. The herb is generally known as kaneh-bosm, which is mentioned numerous times in the Old Testament as a bartering material, incense, and ingredient in holy anointing oil. It totally fits.

So, which came first in your food career: cannabis or baking?

I have been a pastry chef for 11 years. I repurposed my culinary knowledge to help found Kaneh Co. about three-and-a-half years ago. About five years ago, I had been working as a pastry chef at restaurants for about 10 years. I worked my way up through San Diego fine dining and found it fulfilling, but the lifestyle is terrible.

At that time, I was going through personal challenges. My dad passed away, I was reevaluating things and if I wanted to be working all the time. Then, I was approached by friends of friends about working in the cannabis industry. I was iffy about it because at the time legality was unsure of where it was going. So it took me a while to commit to doing this. But eventually, we started this company. It's been a wild ride, but I'm loving it! 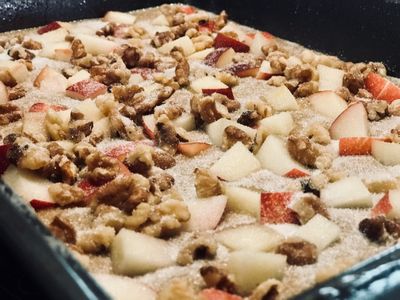 Had you ever baked with edibles before?

No, it scared me. I have to be honest: cannabis wasn't a huge interest of mine previously. Sure, I have dabbled in cannabis since I was a teenager. But my partners are cannabis industry veterans and they really drove it home that this would be a great business to start together. We started with two people (including myself) in our kitchen, and now we have a full-blown kitchen team full of great cooks.

What about now — have you gotten more into it?

Somewhat? The timing is interesting because my eyes have become more open through education. The key is moderating my dosage. For me, 5 mg is good. When I first started doing this, I thought I’d just be making brownies and cookies. I was coming from making these multiple component plated desserts and running a hotel program. But that was very silly of me because I’ve learned a whole new set of skills in this industry. As far as cannabis, trying to balance the flavors has been interesting. Besides learning things, the camaraderie in the cannabis industry and the different types of people that I’ve met have been great.

Let's talk about the blondies, which are a riff on the Kaneh version (and look delicious, by the way!). How did you perfect this infused recipe to maintain a solid balance of taste and texture?

The dark brown sugar and vanilla notes balance out the herbal notes of the cannabis. Sugar and baking times are, in my opinion, the biggest variables in regards to texture. The right amount of eggs and flour also make a difference. I'm super picky on texture. I do not enjoy cakey brownies or blondies, and despise dry or crumbly ones. Chewy and a touch "underbaked" in the very center are my preference.

Cooking with concentrates is such an underrated form of infusing edibles. I have to give you huge props here because it’s such an easy way to infuse without having to worry about terpene flavor profiles, stinking up your apartment with weed smell, or messing up your decarbing process. But it’s also a less popular way for most bakers to do at home. When did you start working with concentrates and what do you love about them?

I began working with concentrates when our business began. We have exclusively used oil or distillate since our start. They impart less undesirable flavors and give consistent results. Reliability in dosing is paramount to me and our company as a whole.

What should people keep in mind when cooking with concentrates?

If I’m making cookies, I like to put it in during the creaming portion of it. If I’m making something with butter, I’ll put it in during the melting process, not the heating process. We’ll heat the butter then add the medication. You don’t want pockets of medication. So as far as consistency, we found those methods are the best. Nothing is baked at a high enough temperature to make a difference. It doesn’t bake-off. We’re talking 325F for 30 minutes. So it’s not a big deal. If someone does decide to do a high dosage, the bake time can change a bit and interesting.

The challenges have been managing fat content, especially where we were doing medical and did higher dosages. A lot of the recipes we’ll sub out the butter in the recipe and it’s replaced with cannabis. With higher dosages, we found there were issues with that. Now that we’re doing 5 mg, only a slight herbal flavor comes through and some you can’t at all. In general, I think it’s quite complimentary. You can taste some herbal flavor on some of our jellies, which complements the flavor. The texture isn’t affected as much.

Okay, everyone has some story about their first time with edibles. What’s yours?

You know I can't honestly remember my first edible experience! I remember the first time I smoked, though. I barely felt it. Then the next time, I went way overboard and could barely function! The most memorable edible experience I have had is when a chef I worked for gave me a homemade cannabis brownie in the middle of a dinner service at a restaurant I worked at. I split it with a friend after work and ended up giggling on the couch for hours. It was a good time.

You get that question a lot, don’t you?

DIY
FOOD
CULTURE
BAKED TO PERFECTION
MORE...
Carly Fisher
FOLLOW
Carly Fisher is an award winning journalist, culinary expert and author of "Easy Weekend Getaways in the Hudson Valley and Catskills" coming April 2020 through The Countryman Press (a division of W.W. Norton). She loves cannabis in all forms, but is partial to top-shelf bud and anything that gets her pleasantly stoned.
Share this article with your friends!
AD
By using our site you agree to our use of cookies to deliver a better experience.
Accept
Decline
MORE FROM MERRY JANE