CULTURE
Baked to Perfection: Stay Cherried with This Canna-Cobbler by the Weed+Grub Duo
AD
Mike Glazer and Mary Jane Gibson give us the breakdown of their infused-cherry canna-cobbler recipe, why it's better than (boring ol') pie, and the scoop on their dope podcast.
Published on August 20, 2019

Whether you identify as a “medical cannabis user,” “pothead,” “secret smoker,” “ratchet-stoner-excessively-sensitive-Pisces-witch-art school-dropout-babe” (my kin), or the myriad of sub-sub-cultures, the fact is that we — tokers and stoners — are all cut from the same cloth: we’re all people who just love the fuck out of weed.

I love edibles, in particular, because when I think of the people who are my people, I think of foodies. Weed enhances everything, which is why we get sentimental and dopey and romantic about how “these french fries just taste so potato-y.” It’s why we cry over how much we love Alice Waters, because edibles are, in fact, everything: medicine, food, and the Earth. It’s actual terroir in the most symbolic sense, plus they can make you laugh your ass off (or feel completely blissed out, if that’s your vibe) when paired with the right food and company.

That said, infused food also tastes downright offensive if you don’t know how to cook with the plant properly, or if you don't understand how to use terpenes. With that in mind, you can thank all the beautiful stoner gastronauts, like Mike Glazer and Mary Jane Gibson of the podcast Weed + Grub for taking it upon themselves to test drive recipes even at the expense of getting way too high doing it (more on that later).

Like most great stoner friendship stories, these Los Angeles-based pals met through serendipitous circumstances while Mary Jane (a.k.a. “MJ”) was culture editor at High Times, and Mike was starring in Buzzfeed’s High Guys series (where he smoked with our own Uncle Snoop and hung out with a sloth).

“We hit it off over a strategic what-can-you-do-for-me-get-to-know-you LA type of lunch at Yuko Kitchen (I had a teriyaki chicken rice bowl, Mike had a green tea chocolate chip cookie), and knew we wanted to make things together,” Gibson said. “We love weed, comedy, and cracking each other up. And we love food — Mike went to culinary school, and I cooked on a salmon boat in Alaska. Everything clicked for us over weed and grub, and we knew we had our show.”

Also, MJ would like to note that Mike still owes her $12.31 from that lunch. “He says he just needs a couple more weeks to get it together.” 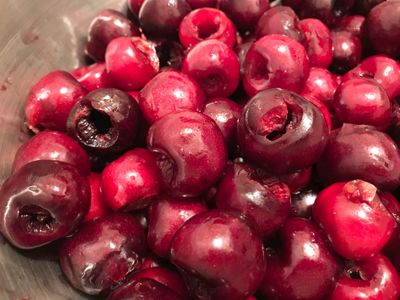 So what can you expect as a recipe from two food-obsessed pop culture personalities? Something sweet, simple, and foolproof: cherry canna-cobbler.

“We’ve had a big bowl of juicy cherries on our desk for the past few weeks while we work since they’re in season [...] and cobbler is the unsung hero of the pastry world — anything can be cobbler-ed. Take your pie crust and get outta here!”

Despite the fact that Mike was once on an episode of Food Network’s Worst Cooks in America, they both assure me that the recipe is actually legit.

“When making cannabutter for your cobbler, try a strain that compliments the tart, sweet fresh cherries,” MJ said. “We love the hybrid Cherry Pie, with its berry notes and uplifting effects — perfect for a summer evening dessert!”

Read on to grab the recipe, bake it, and get baked. Then enjoy a bunch of food-and-weed-obsessed opinions on everything from their feelings on the term “stoner,” to which strain Mike sends a *chef’s kiss* to.

- Wash and pit the cherries. This is the hard part. Everything else is easy as (cherry) pie.

- Combine cherries, 1 cup sugar, ¼ cup water, 2 tablespoons lemon juice, and 1 teaspoon vanilla extract in a large saucepan. Simmer over medium-high heat until bubbling, then reduce heat until thickened. (“We forgot to time exactly how long this step takes because we were perfectly baked ourselves.”)

- In a large bowl, combine the flour, 1 cup of sugar, baking powder, salt and cinnamon.

- Add the milk, and combine until all ingredients are moistened.

- Pour the batter over the butter in the baking dish. Do not stir.

- Pour the cherry filling into the middle of the batter, and do not stir.

- Serve your Cherry Canna-Cobbler warm or cool. A dollop of whipped cream or a scoop of vanilla ice cream makes it even better! 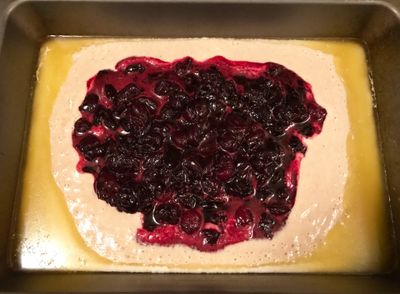 Mike and Mary Jane recommend the MagicalButter MB2e machine for infusions: “Not only do we enjoy using the machine to infuse cannabis into our topicals, oils and butters, but the team at MagicalButter are fans and sponsors of our Weed + Grub Podcast.”

MERRY JANE: First of all, tell us about the podcast. What can listeners expect to hear on the show?

WEED + GRUB: Listeners can expect high-larious conversations, spicy takes and fascinating guests. If you like comedy, cannabis and culture, then we’re the podcast for you. We argue about whether milk or dark chocolate is better, interview icons like Jim Belushi, Ron Funches, and Laganja Estranga, and break down what’s up in cannabis news. We drop new episodes every Monday and Wednesday. It’s our favorite thing to do, and our fans feel like family — shout out to our fam all over the world!

Assuming that you both have a strong affinity for weed to make a whole podcast about it, so tell us: what is your weed regimen like?

We’re more than a podcast about weed. It’s a part of our daily lives, and we do our best to raise awareness about all the good and bad things happening in the weed world, but our podcast is for anyone, whether they get high or not. It’s inclusive.

We’ve gotten fan mail and art from weed smokers around the globe, and we’ve also received open-hearted letters from non-consumers saying they’ve listened to Weed + Grub and now realize that “stoner” isn’t a bad term — and even though they’ve never tried cannabis, our podcast has helped them erase their judgment about people who blaze.

Mike loves a late-night dab or a couple puffs of a pre-roll throughout the day. Hybrid flower is his *chef’s kiss*. Mary Jane likes a few drops of cannabis tincture before going on a hike with her dog, or a few puffs of Mike’s joint. 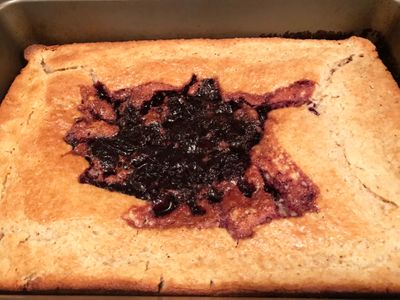 What do you use weed for the most? To relax, to be creative, to laugh, to file taxes...?

Weed is such a magnificent Swiss Army knife. There’s a strain for any occasion (or orgasm). MJ likes to get baked and paint furniture. Mike is great at being onstage and on camera when he’s lit. We love sparking up a joint with a guest and letting the conversation unfurl... cannabis is the greatest connector in the world. Also, if anyone has any tips to beat level 1026 on Angry Birds, please DM our IG @weedandgrub.

Let's talk about the recipe. First, major props on creativity and execution, as we were definitely raising an eyebrow over here at Mike’s cameo on “Worst Cooks in America,” but this recipe looks fab! So, why cherry cobbler? It's a delicious recipe, but did you have a personal connection with it or an affinity for cherry or cobbler or did the idea just spring out to you...?

We’ve had a big bowl of juicy cherries on our desk for the past few weeks while we work since they’re in season. Do yourself a favor and buy a pound of fresh cherries, pop them in the fridge and pull them out when you’re craving a sweet summery treat.

And cobbler is the unsung hero of the pastry world — anything can be cobbler-ed. Take your pie crust and get outta here! Who doesn’t love a sweet-and-tart fruity mouth-load of buttery crispness with cream? When we made this recipe, one of us caught the other one eating a giant forkful over the sink in her underwear like a bear with a paw full of honey. We’re not gonna say who’s who.

Your show is all about weed and food, so please dish on your favorite thing to eat when you're high. Do you go for the sweet or savory, or a little of A and B?

Roast chicken. Over the sink. In our underwear. Also, Dirty Mint ice cream by Coolhaus no matter what we’re wearing. 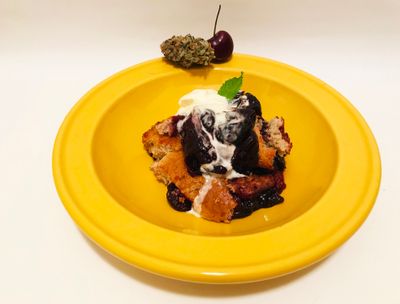 Do you like to get high before, during, or after cooking? What's your ideal weed and grub set up?

Oh god, one of the joys of cooking while smoking is how time slows down and you can just completely relax into the rhythm of chopping, stirring, sizzling and slurping. And it’s so fun to find the perfect strain pairing for your dish. Give us a puff of Purple Punch before chowing down on homemade fish tacos and ta-da — time to turn on Chopped and chilllllll.

It wouldn’t be Baked to Perfection without asking: what was your most memorable experience with edibles?

One time Mike did a stand-up show where every comedian ate a 100mg edible before performing. His body was vibrating so hard, like Neo dodging bullets [in The Matrix], and surprisingly he had a great set. But, after the set, he couldn’t talk to anyone — he was so trapped in his own mind — so he said out loud, “I can’t keep talking to you. I have to go home.” He awkwardly left the conversation and silently stood on the corner of the street a few feet away from the people he was talking with until his Uber arrived to take him to his bed, where he closed all of his eyes — even his third one.

MJ once came home to a note from her pet-sitter telling her to enjoy the mushroom pasta in the fridge. She ate the whole thing and then realized it was made with infused olive oil, so she cancelled her dinner plans in Hoboken and slept for 16 hours. It was pretty great.

FOOD
CULTURE
BAKED TO PERFECTION
POP CULTURE
MORE...
Carly Fisher
FOLLOW
Carly Fisher is an award winning journalist, culinary expert and author of "Easy Weekend Getaways in the Hudson Valley and Catskills" coming April 2020 through The Countryman Press (a division of W.W. Norton). She loves cannabis in all forms, but is partial to top-shelf bud and anything that gets her pleasantly stoned.
Share this article with your friends!
AD
By using our site you agree to our use of cookies to deliver a better experience.
Accept
Decline
MORE FROM MERRY JANE