Some in the editorial world might consider penning a Pride-related article in July “untimely.” But I’m of the mindset that Pride should be celebrated every day and that things like “time” and “rules” are just constructs. Also, trying to get ahold of your LGBTQIA+ friends during Pride month will inevitably result in a completely warranted photo drop of some dope ass party you weren’t invited to (but respect that!) where everyone is dancing to Madame X (despite having love-it-but-hate-it WTF Madonna f-e-e-l-i-n-g-s) and the realization that July is still a perfectly acceptable month to spill the tea.

Which is why I did not only find a queen for this week’s Baked to Perfection column — I found The Queen: Miss Stonewall Inn 2019, a.k.a. Cissy Walken. Earning the crown an honor itself, but this year is a downright landmark as the iconic New York City institution commemorates 50 years since the Stonewall uprising transformed a small gay bar into the birthplace of the modern Gay Rights movement.

Along with her fancy new crown and sash, this is also a big year as she’s just launched an Italian-American drag queen pasta class called Cissy’s Pasta Party at Freshmade NYC, a culinary studio in Manhattan where she teaches cooking classes to kids during the daytime as Chef Trevor. While there are no after-hours cannabis cooking classes currently on the docket (cross your fingers for 2020 legalization in New York!), Cissy admits that tagliatelle isn’t the only thing she can roll. Like fellow famous queen Laganja Estranga, Cissy is a proud member of the 420 club.

What better way to combine her greatest loves than sharing a super green pasta infused with fresh herbs, veggies, and dank bud? “I like this recipe because it’s such a comfort dish and it tastes so much better than you expect it to be,” she says. “Also, using an infused butter already works with the traditional prep of this recipe. I like to keep it classic so it works!”

Read on for Cissy’s incredibly easy and fresh infused recipe, which song she performs for “her pasta number,” and her first memories taking edibles. 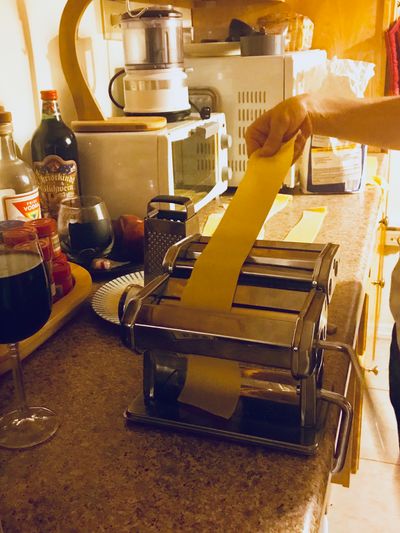 - 1½ cup flour, sifted (plus extra for rolling and cutting)

- 2 tablespoons EVOO (you can also infuse oil, but I'd rather infuse the sauce)

- Salt and pepper, to taste

- Optional, but encouraged: your favorite green veggies (peas and spinach are my favorites!)

Bring one large pot of water to boil. Sift flour and salt into large bowl or onto a wooden board. Mix and create a well in the center of the dry mixture. Add eggs, yolks and oil to the well, breaking the yolks first and whipping until the dry mixture is thoroughly incorporated. Note: if you kept your fork in the mixture for the entire time, you should have one piece of dough and not multiple chunks. But having little pieces isn't a problem!

Knead dough thoroughly with remaining dry mixture until it’s an even color and smooth texture. If the dough is exceptionally dry, add an extra yolk. Wrap dough in plastic and rest at room temperature for at least 30 minutes.

If you have a pasta rolling machine, split the dough into four pieces. If you are cutting by hand, then you may only need to split it in half. Excessively coat your workspace and hands with flour and toss dough until evenly coated.

Begin to roll dough out by hand until ¼-inch thick. Fold the dough into itself in thirds (like a brochure) to create two parallel edges. Press to seal folds, then flip to flat side and roll until ¼- to ⅛-inch thick.

To roll by machine: Transfer to your machine, starting on thickest setting and working one-by-one until reaching the thinnest setting (for me, that's number 9). Coat with more flour as needed. Hold the dough taught and center as it goes through the machine to prevent fraying. Once thin, coat again and move to cutting attachment. Holdly the dough taught as it goes through cutter. Immediately toss the cut noodles to separate them, then toss into simmering water until noodles float, then drain (reserving 1 cup).

To roll by hand: Coat both sides with flour and lightly roll up the dough to create a long strip full of layers. Taking your sharpest knife, slice the roll entirely making small cuts throughout. You should have very small tagliatelle. Toss into simmering water until noodles float, then drain (reserving 1 cup).

To make the sauce: Over low heat, add 2 tablespoons of cannabutter to a skillet with 2 tablespoons flour. Whisk until flour becomes light brown in color. Add heavy cream, salt and pepper, stirring often and bringing to a light simmer. Cook down until most of the moisture has evaporated, then add remaining pasta water and mix. Mix in optional veggies and reserved pasta water until cooked through. Season with red pepper, garlic, herbs, cheese and remaining cannabutter. Bring to simmer and remove from heat.

Toss hot, drained pasta into sauce and mix thoroughly. Serve with more sprinkled Parmesan, a glass of red wine and a joint. You deserve it! 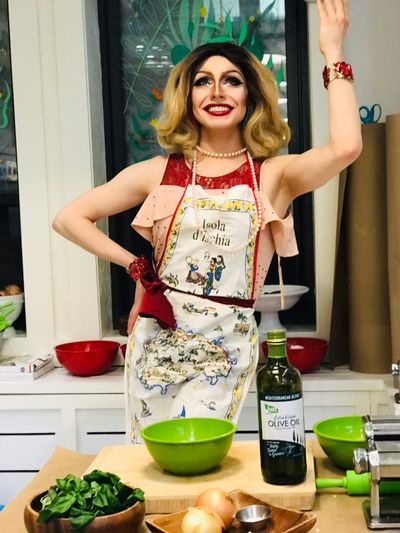 MERRY JANE: First of all, condragulations on being crowned Miss Stonewall 2019! Tell us about your journey through drag to becoming Cissy Walken.

Cissy Walken: Thank you so much! I started performing in drag two years ago and before that I was working in the theatre. I had bubbling thoughts about doing drag around the time of my college graduation, but it wasn’t until I went on tour with a children’s theatre show that I knew this was my path. I played two “girl” characters to audiences of kids from 2 to 12 and when they’d ask my gender, my answer did not surprise them. The future of the American family is queer and this is my way to serve the community.

What’s the origin story behind the name Cissy Walken?

Cissy started life as Cicely, but it didn’t really roll off the tongue. When someone suggested Cissy, I immediately was caught off-guard and felt a rush of pain. As a kid, I was often called a “sissy” or “a girl” because of my physical abilities and different interests. From there, I decided it’s time to take back that word and its power over me.

In addition to performing all over New York City, you've also started your own drag queen cooking class, Cissy’s Pasta Party. How did you start cooking and what can guests expect from your class?

I’ve been cooking for as long as I can remember eating. Cooking was always a family activity as is typical with Italian-Americans. But what made my experience with cooking so personal was also learning how to grow the food we eat. My Nonno had this massive garden in the backyard full of every vegetable you can think of and they survived by eating what they could produce off their land. On a small scale, it showed me our heritage: where we came from and where we’re going.

Cissy’s Pasta Party is pretty amazing, and I’m not saying that because I made it. We start with a welcome cocktail and I do my special “pasta number” to “Be Italian” [from 2009 film, Nine].  Then we make the dish of the night from scratch with my instruction. After it’s all sent to the stove or oven, the guests keep drinking and we set the table to eat. As they’re getting served dinner, I go change quickly and then sing a bunch of songs. You leave with a full stomach and gay spirits.

You have a Sophia Loren-meets-Real Housewives of New York thing going on, so we have to ask: who is your biggest culinary influence?

My Nonna is my biggest inspiration. I used to have dinner at her house every night as a little kid, so I grew up eating the traditional Italian dishes you don’t find at restaurants (though, I guess in New York you can find it if you tried). I was little and eating things like rabbit, escarole, pheasant, broccoli rabe — always served with pasta, of course.

Everyone has a special relationship with cannabis. What’s yours?

I’m a daily cannabis user (Sorry, Mom. Thanks, Dad). I love it as an ingredient because I have so much muscle tension and edibles always help them relax. And I also only really like using it when it’s infused into a fat, not as a sugar concentrate. I think it’s stronger and lasts longer, but I’m sure science has something to say about that.

No one forgets their first time, so tell us about yours using edibles.

One time my brother and I ate these brownies we bought from some kid outside the Krauzser’s Convenience Store. My brother had a “transcendent experience” and went on a 10-minute non-stop monologue about Steamboat Willy. I still tease him about it.

FOOD
CULTURE
BAKED TO PERFECTION
LGBTQ+
MORE...
Carly Fisher
FOLLOW
Carly Fisher is an award winning journalist, culinary expert and author of "Easy Weekend Getaways in the Hudson Valley and Catskills" coming April 2020 through The Countryman Press (a division of W.W. Norton). She loves cannabis in all forms, but is partial to top-shelf bud and anything that gets her pleasantly stoned.
Share this article with your friends!
AD
By using our site you agree to our use of cookies to deliver a better experience.
Accept
Decline
MORE FROM MERRY JANE