CULTURE
Baked to Perfection: Brooklyn's 'The Green Fairy' Whips Up Infused Puppy Chow
AD
This sweet treat isn't actually for dogs — it's for humans who need a dose of mysticism (and THC) in their everyday lives.
Published on September 3, 2019

Photos courtesy of The Green Fairy

One of my favorite cannabis subcultures are “weed witches.” They’re the “outside” thinkers, typically revered and feared for their unconventional thoughts and nature-based practices — all of whom used cannabis as a part of ancient holistic medicine and wellness. You’ll find them associated with Western and Eastern practices, including: Celtic pagan nature worship, Indian ayurveda, Chinese Taoist ritualism, West African Tekruri, the Oracle of Delphi, West Indian Obeah practices, Jewish Kabbalah, and so on. Yet, here we are, still destigmatizing in 2019! *Slaps palm to forehead*

It’s easy to forget the (obvious) fact that cannabis, hashish, and psilocybin were all just plants intended for holistic healing and ritualism. When you remember that these Earth-grown treasures are just like all the other herbs and roots everyone happily pays a premium for at Whole Foods, GNC, or high-end luxury boutiques, the stigmas deflate and seem instantly ludacris. That’s why weed witches will always be my favorite: they uphold medicinal mysticism in a world where the majority continues to downplay the magic realism of the plant.

The reason I’m shoving witchy magic down your throat is because this week’s column features one of the witchiest underground bakers in Brooklyn: The Green Fairy. I have her to thank for introducing me to the endless possibilities of edibles. Her recipes are among the most delicious, which you can see on her Instagram. It’s peppered with green-and-gold-laced confections, spiked treats, infused gummies, and (droolworthy) kush key lime pie. Her dark mint chocolate truffles with burnt brownie bits and green glitter sprinkled on top are possibly the best edibles I’ve ever eaten. So, it’s only appropriate to curtsy and spread the word about these mythical treats. Plus, hanging with her felt like being in a weed-fueled Willy Wonka dream. I was not mad about it at all, in case you were wondering.

The Green Fairy’s been published in Vogue and The Coveteur because her treats are nothing short of magic. So, for this installment of Baked to Perfection, I’m bestowing you all with a recipe from NYC’s most beloved fae, which is a medicated take on a Midwestern Girl Scout favorite known as “puppy chow.” It’s a blend of rice Chex mix covered in chocolate, peanut butter, and powdered sugar. So read on, hazy sojourners! You’ll not only learn how to craft this super easy recipe, but you’ll also learn about her trifecta of butters (that you can emulate!), how moon cycles factor into her tinctures, and how Buffalo Wild Wings can be a helpful rating system to understand the psychosomatic intensity of cannabis edibles. 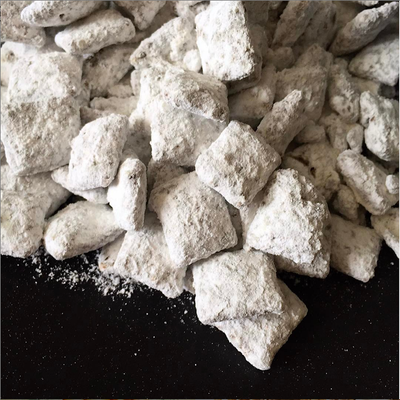 Photo courtesy of The Green Fairy

In a small saucepan over low heat, melt TGF Magical Butter and regular butter. Mix in peanut butter and chocolate chips, stirring until creamy and well-blended with no lumps — don’t over-cook! Remove from heat.

Mix in vanilla and sea salt, stirring until evenly dispersed. Pour mixture over Chex, making sure to coat each piece evenly (some pieces will crumble — that’s okay!). Divide mixture among two Ziploc bags. Pour 1 cup powdered sugar into each bag, then seal and shake until evenly mixed. Add remaining powdered sugar between both mixtures and shake again (preferably to the beat of your favorite song — I personally LOVE to bake to The Notorious BIG. Seriously, turn it on). If chunking occurs, break into smaller pieces and add more powdered sugar. Sprinkle with sea salt.

Serve by ⅓ cup portions. After you have your first serving, wait at least 45 minutes to 1.5 hours before consuming more. Continue dancing! Enjoy! 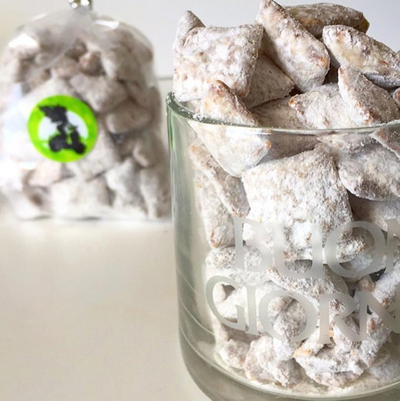 How to Make The Green Fairy Magical Butter©:

Decarboxylate your cannabis. Preheat oven to 225 F to 240 F degrees. Spread out cannabis onto a flat surface in pan, place in oven. Using a fork, sift through the greens every 10 minutes for 45 minutes. Remove from oven. Let cool.

Using a double boiler or a small saucepan, melt ½ cup butter over low heat. Slowly mix in ¼ cup ground or finely chopped decarbed cannabis, stirring frequently. Small bubbles at the edges will start to form, be sure to scrape the sides and continue mixing on and off for 45 minutes.

Remove from heat and allow to cool for 10 minutes, and continue to stir. Place the strainer of your choice over the opening of the mason jar, and pour the mixture through the strainer into the jar. Squeeze any excess butter through the top of the strainer and discard the extracted greens (this straining process can be done two or three times depending on how clear you would like your extract to be). Seal with lid and immediately chill in the refrigerator. Yields: 60 servings (10 mg/tsp.)

MERRY JANE: So, your edibles have somewhat of a legendary status around Brooklyn. Can you tell us about the secret sauce better known as The Green Fairy Magical Butter©?

The Green Fairy: There are three parts to everything that I make, which I call, “The Trifecta.” It consists of three equal parts (coconut oil, butter, and cocoa butter) that I clarify and turn into a ghee. The coconut oil is super clean — I love the buttery, nutty flavor. And it's a better texture. The coconut oil just melts right away.

What do you use to infuse?

I have had one of those Magical Butter machines from day one. Right now it's Blue Flame, which I'm digging. It's not earthy, but it's strong. Like, on a scale of one to 10 “Buffalo Wild Wings spicy,” it would be a seven.

Did you just use Buffalo Wild Wings spiciness to describe the intensity of your weed?

Yeah, it’s an easy way for first-timers to understand as a standard dosing of what constitutes a good time hanging out with The Green Fairy. Every single thing you see here has at least one, two, or three components of The Trifecta. So, not everything is “a trifecta.”

Whoa. You know, I never thought of mixing flavors and textures of different cannabis-infused butters to make a compound butter. That makes so much sense, you just blew my mind. You also make tinctures and extracts, right?

The tinctures I make are in these vintage bottles. They’re like wines — at one point I had eight full brews. My old magic teacher would say, “Tinctures get stronger as they age, so you should be making a new one every new moon.” That’s why everything starts at a new moon and goes through a full cycle. 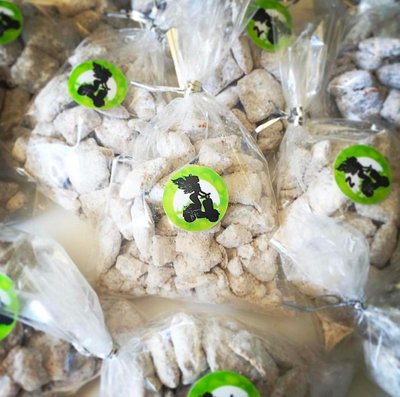 That sounds so involved!

When I first looked into making extractions, I realized that I needed to learn how to make candy and a tincture. So, I started reading everything about it. Everything on my menu is made for a very particular purpose. I’m into things such as the booze world, alchemy, and potions. And also, because I’m part-Cherokee, I took an interest in learning more about that side of me and about how they would extract the tinctures. I was imagining these old witches just sitting around brewing. But they're using things like dandelion to help people with pain and digestion — all the things that are now add-ons to our smoothies.

Honestly, I don't trust anyone who claims to be a witch and doesn't smoke weed or has a problem with it. I mean, you’re essentially an herbalist.

Right. Back when my great-great-grandmother was hanging out and they were brewing stuff, they would pay attention to the moon, and how many times they would see the moon until their potion was ready.

How does the moon factor into your weed tinctures?

New moons are about new beginnings and initiative. The energy of the full moon is so tight. So, you make a list of things that you want to get rid of that you're ready to release. Throughout the life cycle of a tincture, there's a lot of very personal affirmations going on. Each moon tincture will really impact your body in different ways. And you'll feel all my feelings probably [laughs].

What are the feelings of these? Were you in a good mood?

[Laughs] Yeah, each brew is really based on my mood. I have all these bottles filled with different leaves and teas and dried things, like reishi mushroom powder, ashwagandha, and fire powder – just weird stuff that I’m fascinated with that were available at this shop on First Avenue. I would go in and just learn everything — everyone should go in there.

So, the puppy chow — first of all, it is delicious. Getting major nostalgic vibes for when I was in Girl Scout Camp in Chicago.

Me too! I'm from Minnesota. I've been trying to explain to people what this is! I had no idea no one knew. At first I thought it was a joke and that people were just fucking with me and being super obnoxious and East Coast about it. Then I realized it was a Midwestern thing. I grew up making this when I was really young.

You make all of these incredible things, so I have to ask: what got you into the edibles game?

I just didn’t want to have a boss — like a corporate boss. I feel so detached from that world. I've always been a weird mystic creeping around it all. Not ever really in it or out of it. I didn’t want to follow someone else's schedule anymore because I work in spurts. I get so much done in 48 hours, then I'll chill the fuck out for the next three days. There's no rhyme or reason to it, and it's so difficult to try to follow the parameters of the world when you can just make your own.

With the edibles, I started because I had no idea how I was going to be able to pay my rent. I moved to East Village and it was like double what I was paying before. I knew I could always ask my family for help, but I don't want to. I've never ever asked — I wouldn't. So, when I showed up, the guys who left the apartment had left me a brick of weed butter with this note that said, "Welcome to your new home."

That is maybe the most 2019 New York City weed story I think I’ve ever heard.

It was written on the back of a menu for The Cardinal, and it said, "This place has the best fried chicken. We left you something in the fridge to help kick off your new life" or something. And it was this huge brick of weed butter — like it was huge!  They knew I baked a little, but they didn't know I was in it like that. So, it was this opportunity that literally just presented itself. Weed has always crept up in my life in a lot of ways. It's in my family and in my blood.

FOOD
CULTURE
NEW YORK
BAKED TO PERFECTION
MORE...
Carly Fisher
FOLLOW
Carly Fisher is an award winning journalist, culinary expert and author of "Easy Weekend Getaways in the Hudson Valley and Catskills" coming April 2020 through The Countryman Press (a division of W.W. Norton). She loves cannabis in all forms, but is partial to top-shelf bud and anything that gets her pleasantly stoned.
Share this article with your friends!
AD
By using our site you agree to our use of cookies to deliver a better experience.
Accept
Decline
MORE FROM MERRY JANE