CULTURE
Baked to Perfection: Braised and Infused Tom Yum Fit for 420 Royalty
AD
Want to impress your next dinner guests? Try swooning them with this wildly tasty (and laced!) Tom Yum by Chef Rudy G. Sta Ana.
Published on August 9, 2019

Hi, California. It’s me, Carly. I'm just over here gaping with the kind of longing typically reserved for deep crushes, wanderlust, and the kind of future you want to see yourself in. Because if you happen to be in Southern California, you can get so many wonderful things — Filipino and Thai cuisines, as well as weed — in one bowl thanks to Chef Rudy G. Sta Ana, the self-made force behind Cannabis Catered Events.

Raised in Pampanga, the culinary capital of the Philippines, he was blessed with an early education in cooking (albeit, begrudgingly). “Most of the men from our town are taught to cook from a young age,” he said. “At the time, they kind of force you to do those things, and I didn’t like it. But it’s embedded there to teach you how to cook.”

Those forced culinary skills would come in handy by his mid-twenties when cooking became a necessity. Missing the foods of Pampanga and unable to find a decent local spot, he began perfecting his technique at home and started cooking at Thai and Filipino restaurants.

“I didn’t like Filipino food I would find at other places, so I’d make the foods of my mother, my grandmother, and my aunts at home,” he said. “I started realizing they were getting older, so I had to learn the recipes.”

Becoming a competent chef is worthy of bragging rights on its own, but mastering cannabis cooking is an art. A lifelong weed lover, Sta Ana found his calling thanks to the emergence of the show Bong Appetit and the rise of gourmet edibles culture in SoCal. About two years ago, he finally took the leap to open his own cannabis catering event brand and has basically been living the dream ever since. 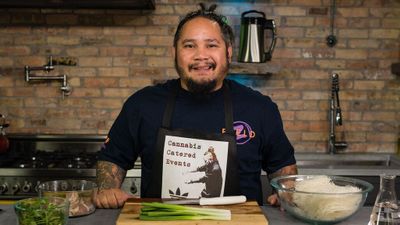 Do you even realize how lucky you are, California?! (Of course you do. No need to rub it in the rest of our faces). However, if you’re landlocked thousands of miles away from one of his cosmic events (like the comedy-weed-rap “High Seas” cruise ship party he did a few weeks ago), I present you with the second best option: his recipe for infused Tom Yum noodles with braised pork belly to make yourself at home.

“It’s basically a fusion of a Filipino recipe and Thai recipe — I combined the best of both worlds,” he said. “The main thing that’s going to stick out is the sourness, then the sweet and spicy will hit after. I complimented the sour flavor using Lemon Kush terpenes and lemongrass, so it really heightens the flavor profile of the natural ingredients. You get that euphoric feeling, like when you’re walking through the forest and touching pines. That’s the closest feeling I can describe. You just feel your senses aroused and heightened.”

Experiencing Pavlovian feelings? Read ahead to get Sta Ana’s recipe, learn more about the SoCal cannabis food scene, and what made him flip from being a hardcore OG stan to a sativa evangelist. Marinate pork belly in a mixture of soy sauce and lemon, resting in the refrigerator for at least 30 minutes.

Boil vermicelli for about 10 minutes. Strain, then set aside.

Saute whole garlic for about 1 minute in CBD coconut oil. Add fish sauce, Tom Yum paste, Thai chili, palm sugar, and CBD alkaline water. Bring to a simmer until it thickens, then reduce heat. In the same pan, sear pork over medium-high heat, then reduce to a simmer over low heat and cover. Braise until browned on both sides, then slice into thin slices.

To plate: Twist a handful of the vermicelli noodles onto the plate. Top with sliced pork belly, a splash of Tom Yum sauce. Garnish with a sprinkling of chopped cilantro, green onions, and extra Thai chilies. 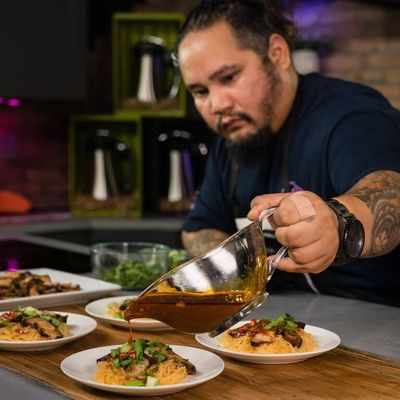 MERRY JANE: Tell us a little bit about your journey to becoming a professional chef.

Chef Rudy G. Sta Ana: My journey is a little unorthodox. I’m not your traditional chef by any standards, but what I lack in culinary training I make up for it with my heart and passion for cooking. I am from a city called Pampanga, which is the culinary capital of the Philippines. Most of the men from our town are taught to cook from a young age. At the time, they kind of force you to do those things — I didn’t like it. But it’s embedded there to teach you how to cook. I didn’t really start cooking-cooking until my mid-twenties. I didn’t like Filipino food I would find at other places, so I’d make the foods of my mother, my grandmother, and my aunts at home. I started realizing they were getting older, so I had to learn the recipes.

So, what made you go pro?

Throughout the years I worked in Filipino and Thai restaurants, so those are my main influences and background. But really, it was from watching a lot of Bong Appetit. Everyone who knows me knows that I’m passionate about cannabis and cooking, and that show had me hooked. One day, I had some food at this Sesh in San Bernardino —

Sesh? Wait, what is that? Sorry, we don’t have those on the East Coast.

It’s like a cannabis farmers market where you’ll have 10 to 20 farmers selling their product.

I know, right? One vendor was selling tacos that were infused, and I was like, this is Bong Appetit in real life! But then I tasted the food, and it was… eh. I started going to more events and realized that people were looking for good food, and that's when I sat down with my wife and said, “If I make my food infused, people will be more open to it.” And I just did it. I have no training, I had no contacts in the cannabis industry. It was in September or October 2017. I started right before legalization — that’s when I did my launch. I don’t want to say that I got lucky because a lot of people were doing this. I just worked really hard, people took a liking to me, and I was able to build off of that.

Did you cook with cannabis before that?

Honestly, before I started my business, I never attempted to make anything infused at all. I just knew how to cook, was really into weed, and watched every episode of Bong Appetit five to 10 times each. I reached out to all the real chefs in the industry, like Brandon Allen and Matt Cook, and they helped me. Just learning by trial by error.

Are you a sativa or indica dude?

This is kind of funny. I smoked weed for so long, but I was always an OG guy. For many years, I only smoked OGs, and that kept me in hibernation. Then, two years ago, I started smoking sativa and have been able to build an empire. It quenches my appetite, helps me lose weight, keep focused. When I smoke indica, I might have to call off half of the day. I’m just not as productive. I like Tangie and Jack — any kind of Jack. Anything hybrid that's [sativa-dominant]. For better or worse, what was one of your most memorable experiences with edibles?

Edible overdose, ER, vomiting for 3 hours straight … and it also helped my recovery with surgery because the pharma pills didn’t work.

My surgery is how I know about edibles. Had I never had my surgery I wouldn’t have tried edibles or paid attention to Bong Appetit. I knew that medicinally it really worked. The medicine they prescribed me (Percocet) didn’t do anything, but edibles really helped me.

I mean, that part sounds great, but the other stuff... that sucks.

The ER happened because I was at a party, took some random edibles, started throwing up and I got scared. They said it was an edibles overdose and gave me a lot of fluids. So many people just don’t really know their dosing or the process of making the oils and butters, so they add way too much. That’s why I microdose my guests with low-low edibles, and serve more on the side as an addition. Really, I approach it like a bartender and keep things microdosed so people will know they’ll be okay. The majority of the time, I’m doing CBD because that’s requested of me, so there’s no psychosomatic component. You have to keep in mind if they have to travel, if they drove, that tolerance is different for every person.

How do terpenes factor into your cooking? Do you complement or neutralize them?

Terps are huge for me, I personally like using True Terpenes. Cannabis terpenes are still new and tricky territory for pairing, particularly those skunkier, grassy strains. I have about 25 flavors, so that helps to match profiles with the ingredients that I’m using. Sometimes I’ll complement it; other times I’ll do the total opposite to get contrasting textures and flavors. It really just depends on what I am trying to accomplish.

Because of my background working in Filipino and Thai restaurants, these are my two favorite foods. So, it’s unique in the way that I combine them: the Tom Yum is Thai, but the vermicelli noodles are what we use for pancit and that’s what I put it on. The pork steak was flavored like the Filipino dish, beefsteak, but I made it with pork. I braise it rather than cooking traditionally, then chop it up. You’re looking at something really simple: soy sauce, about a half a lemon, and onion, salt, and pepper. Ideally the reason that I put these two together is I wanted to go through a spectrum of flavors with the dish: you’ll have the sour from the Tom Yum right away and the sweetness from the coconut milk; then you’ll get a little saltiness from the pork and soy sauce, with the spice coming in at the end. When you combine it all together, it’s really amazing.

Final word: what’s the best trick for cooking with weed?

Always remember to decarb your flower!

EDIBLES
RECIPE
FOOD
CULTURE
MORE...
IN THIS STORY
CBD
Click to shop at our CBD store
Carly Fisher
FOLLOW
Carly Fisher is an award winning journalist, culinary expert and author of "Easy Weekend Getaways in the Hudson Valley and Catskills" coming April 2020 through The Countryman Press (a division of W.W. Norton). She loves cannabis in all forms, but is partial to top-shelf bud and anything that gets her pleasantly stoned.
Share this article with your friends!
AD
By using our site you agree to our use of cookies to deliver a better experience.
Accept
Decline
MORE FROM MERRY JANE