CULTURE
Aussie Punks The Chats Dish on Weed Culture Down Under
AD
The Chats, a wild young trio from Queensland, just released their debut LP, "High-Risk Behavior." MERRY JANE caught up with the band to discuss Australian weed, the country's "shit" Prime Minister, and beer preferences.
Published on March 27, 2020

Ever since the term “punk” was first used to describe bands like MC5 and the Sex Pistols in the 1970s, the sound and ethos of the music style has been in a state of constant flux. These days, “punk” is more of an ideology or attitude than a subgenre, and the term envelops, debatably, a disparate swath of artists from the electrifying and innovative, to the epically lame.

The Chats, a wild young trio who grew up together in Queensland, Australia, hit the high water mark for “punk music” in 2020, and embody a return to its DIY roots and original three-chord brashness (although they prefer the term “shed rock”). Fully lacking in pretense, theirs is the sound of being young, broke, and ready to party. After all, as a certain proto-punk stated over fifty years ago, when you ain’t got nothin’, you ain’t got nothin’ to lose.

Coming on the heels of two homemade EPs and the viral hit “Smoko,” which has racked up close to 10 million views on Youtube, the band just released its debut LP, High-Risk Behavior, via their own Bargain Bin Records. Blasting through fourteen tracks in under thirty minutes, the record presents a polished, hi-fi version of the group’s raucous sound that also succeeds in keeping their frantic energy fully intact.

Throughout the record, the trio’s endearing low-brow hedonism is on full display. Against a backdrop of Eamon Sandwith’s taut bass lines, Josh Price’s jagged guitar riffs and Matt Boggis’ pummeling drums, HRB finds the band doing what they want and nothing else: Sandwith snarls and yelps his way through tales of dining and dashing, being drunk and disorderly, ordering drugs on the internet, and even contracting STIs.

While the band’s brand of partying is often fueled by booze (their website is fittingly named  www.thechatslovebeer.com), they don’t shy away from Aussie weed. We caught up with the singularly-mulleted Sandwith to talk weed culture Down Under, the country’s nightmare of a Prime Minister, and a questionable party drug known as pingers.

This conversation has been edited for length and clarity.

MERRY JANE: What’s a band you heard when you were young that’s really stuck with you?

Eamon Sandwith of The Chats: The first band I got into was The Ramones, who I still listen to to this day. I loved how the songs were short and dumb. My favorite track is either “Pinhead” or “Glad to See You Go,” or “Rockaway Beach.”

That’s awesome, I can definitely hear them in your record. Speaking of which, where’d the name High-Risk Behavior come from?

We got the title from [drummer] Matt [Boggis], who’s a skater. Whenever he got a fine for skating in public, the cops would write “For High Risk Behavior.” We always thought it was a funny way to describe skating. We’d always laugh about that. I think we were gonna make the album self-titled, but High-Risk Behavior aligns with some of the songs about doing stupid shit.

Is weed a big part of skating culture in Australia?

100 percent. I’ve got buddies who run a skate shop and always hook us up with the good stuff.

We have three main categories: outdoor bush, which is organic; then there’s hydro; and then we have indoor/outdoor, a mix of the two. We love a good green bush… do you guys use Gatorade bottles as bongs? That’s the Aussie tradition. If you don't use a Gatorade bottle, it just looks weird. We call at a gator.

I’ve heard that the medical marijuana program in Australia is a real mess.

It’s [only] decriminalized in Canberra [the Australian Capital Territory], a really small state, inside of another state. The government’s views are shit about drugs and pill-testing at festivals. I think it’s gonna be awhile ‘til weed is legal here, but it’ll happen eventually.

It seems like your sweet Prime Minister Mr. Morrison isn’t exactly on board.

He’s a fucking bible basher. Everyone knows he’s a shit leader who can’t do anything. But there are far-right nuts that’ll defend him.

When we put “I Hope Scott’s House Burns Down” out, the feedback was mostly positive, but some people [told us to] stay out of politics.

Some Australian bands I’ve been listening to besides you guys, like Dune Rats and Amyl and the Sniffers, do seem to stay out of politics in favor of talking about partying. Can you describe the party culture in Australia?

Australia has a really big drinking culture. Not unusual for blokes to get on it at 10am and go down to the beach. Not something you bat an eyelid to. Australians love drinking and getting high; it might be out of boredom, really.

What’s your beer of choice?

I love VB. I'll drink any normal lager; PBR or Coors or something. I don't really like craft beers.

Beyond drinking, are there other quintessentially Australian partying substances?

Yeah, pingers. They’re like a press-cut pill that’s usually got ecstasy, speed, or MDMA in it. The thing about pingers is that they’re kind of fucking deadly. The bikeys that distribute them sometimes cut them with rat poison. Some people have died from them; they’re a fucking good time if you don’t take too many.

How many is too many?

Depends what kind of night you're after. Have a couple and you’ll be up into the early hours of the morning. Have seven and you'll be up for a week. You gotta come to Australia and try a pinger. 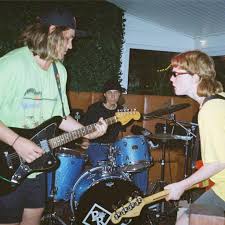 Duly noted. On a related note, what was the band’s first American experience like?

There was a lot that fucking shocked us. We touched down in LA; we had the night off there and went to a dispensary. We couldn’t get in, we were too young. But how mind-blowing is it you can walk down the street and buy a 50 [50 bucks worth of weed]?

I gotta ask, is a “smoko” a weed-inclusive activity?

It's not actually exclusively about smoking at all! A smoko in Australia is just a 10-15 min break that tradesmen will take each day. They'll have an iced coffee or something. Smoking is not compulsory.

Very good to know. Last question for you: are there other bands in Australia that you advise our readers to check out?

Aborted Tortoise, Boing Boing, Crocodylus. Skegss were going to come to the US for Coachella [before it was postponed], and they’re cool.

Those all sound like weed strains! Is there a range of strains available in Australia?

Every now and then a dealer will say it’s White Widow or whatever, but most of the time they're just talking shit.

For more on The Chats, including where to listen to “High-Risk Behavior,” visit the band’s website here

MUSIC
INTERVIEW
HUMOR
DRUGS
MORE...
Max Savage Levenson
FOLLOW
Max Savage Levenson writes about pot and music. His work has appeared in Pitchfork, Bandcamp, Leafly, and NPR. He co-hosts Leafly's pop culture podcast "The Hash" with David Downs. His dream interview is Tyler the Creator.
Share this article with your friends!
AD
By using our site you agree to our use of cookies to deliver a better experience.
Accept
Decline
MORE FROM MERRY JANE