CULTURE
Artist TROG on “The Dab Coloring Book” and the TSA Calling Him a “Drug Tourist”
AD
The Australian artist, known for his cannabis-friendly coloring books, caught up with MERRY JANE about his latest release, getting denied entry to the US, and making art for Tommy Chong.
Published on March 26, 2019

Australian artist TROG — no relation to the obscure horror b-movie of the same name — has been drawing since he was a kid. TROG is the signature he adopted to sign his comic books using his real name’s initials. He is continually inspired by cannabis and the underground “comix” of the ‘60s that schooled hippies on how to most effectively smoke pot long before the first issue of High Times rolled off the press — from R.Crumb’s Mr. Natural to Gilbert Shelton’s Fabulous Furry Freak Brothers, and, of course, Zap Comix. Like many subcultural gems, his identity is unknown to most, but not to MERRY JANE, as he’s spoken with us multiple times.

TROG’s loyalty to cannabis was recently put to the test a few years ago — and the results weren’t pretty. While mid-trip to deliver some artwork overseas to Tommy Chong, the proud boys of the TSA denied him entry into the United States — all because he admitted that he traveled to the United States to smoke pot. Apparently, international travelers can be branded a drug tourist if they travel to Colorado or California with the intention of blazing up. But that hasn’t deterred TROG’s unwavering support for the herb in all of its forms.

TROG also has unwavering support for the therapeutic benefits of adult coloring books. If you ask him, it’s a great way to spend time while stoned, and it helps with creativity, too. His first adult coloring book, The Killer Week Coloring Book, was released two years ago. TROG’s new book, The Dab Coloring Book, is available now for pre-order, and its official release is naturally set for April 20th. The artist from down under took some time to chat with MERRY JANE about his new book, what inspired it, and, of course, weed.

This interview has been edited for length and clarity 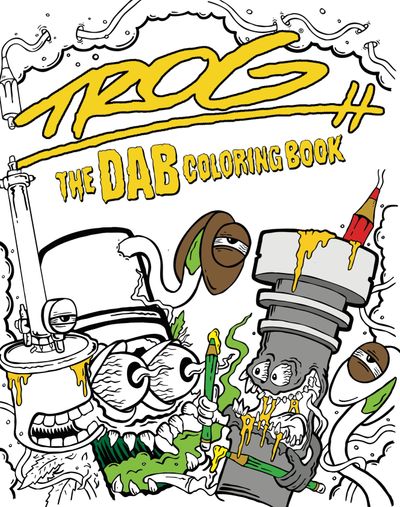 MERRY JANE: The Dab Coloring Book is your latest coloring book for adults. What can we expect inside the pages?

TROG: What can you expect? You can expect to do your head in trying to figure out the right colors to select for every page. If you love getting high and drawing and coloring — like me — this book was made for you. It will keep you busy for a while.

You’ve licensed every type of merchandise imaginable — from custom vaporizers, greeting cards, slabtainers, and pucks, to broaches, pins, and apparel. Is there some kind of brilliant marketing scheme behind all of this?

You forgot posters, bongs, dab rigs, dab pads, magnets, air freshners, rolling papers, stickers, kief boxes, blacklight posters, hat pins, badges, smell-proof bags, rolling trays... [laughing]. It’s funny when you actually read the list of stuff we've released! It started as something I always wanted to do, as it adds and grows your art, so we started to [make] a few little things. Then it became a job for a licensing agent, and we got some mainstream stuff released. Now, it’s at the stage where we pulled back on all the smoking accessories, and we have just launched "TROG GLASS" in Australia, so all of the smoking accessories that feature my art or name will only drop through he TROG GLASS company so we have control of that core market of smoking. 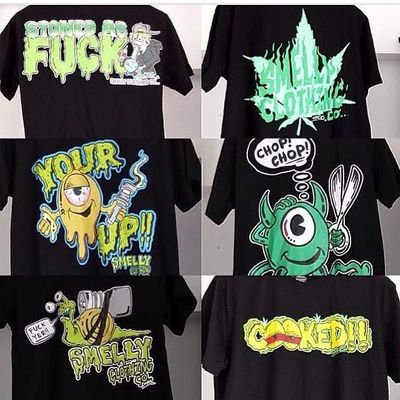 You also founded Smelly Clothing Company, an apparel label featuring dozens of your characters and art. Are you distributed primarily through cannabis-related events?

You were recently denied a visa for entry into the United States from the TSA while you were en route to deliver a custom canvas to Tommy Chong. Is there a story behind this?

Is there a story? Yeah! The moral of the story is a) Don’t wear a t-shirt with a big weed leaf design on it through LAX… and b) When the TSA officer checks your itinerary and asks what you were doing in Colorado, don’t say, “Smoking some fuckin’ weed bro!”

So lets rewind: I had just completed an art exhibition entitled “Wasted Talent 2” in Colorado. So, I left Colorado and just landed in LA. I was going through LAX to hit a connecting flight back to Australia, when the TSA pulled me up – they were looking for someone else, but I guess that other person was a heavily tattooed Australian. And then in I walk to the counter and guess what? I sound Australian.

The TSA guy pulls me aside and said, “What were you in Colorado for?” I didn’t really think anything of him, so I laughed and went, “Smoking some fuckin’weed bro.” Wrong answer! Next thing I know, some other dude with a gun has popped over, and then they escorted me into a room, pulled all my bags apart, and it just so happened that all my bags were full of smoking items. I had to explain to them what some of the shit was, as they weren't really up to speed on some of the smoking accessories.

As it turns out, I should have just shut my mouth and not said a word. As I’m talking to them, I thought I was okay, because I was under the assumption weed was legal in Colorado, but that was under state law only. It’s still illegal under federal law, so these guys had classified me as some kind of drug tourist. 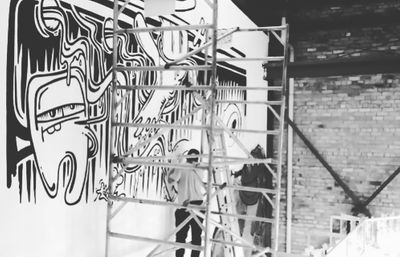 So they let me go, and didn't charge me with anything. Then I flew back from Australia to LAX a few weeks later, as I was set to do a live canvas at Compassesh. While I was there, I had arranged to meet Tommy Chong through his publicists. I had recently done some artwork for him and I was going to gift him one of my canvases. I brought a whole selection of canvases so he could pick his favorite.

So I go back to LA — and I’m a big fan of LA – so I’m pumped. After landing, I was cruising through LAX, then just as I get to the customs area, an armed guard came over and asked me for my passport and then said, “Come with me.” They locked me in a cell for about 20 hours.

They had gone through all my social media pages and checked all my artwork and read interviews about my art. I’m deep in cannabis culture, and I’m very openly pro-cannabis, so whatever ammo these guys needed, I had supplied to them. First thing is they start saying that I've admitted to cannabis use and it’s illegal under federal law, and the airports are run under federal law. I’m like, “What the fuck is going on here?” Then it gets worse. They start explaining I was checked out of Australian customs, but I haven't been entered into USA customs yet, so it’s a grey area. In my head, I’m just thinking of that movie “Terminal” and going, “Fuck, Fuck, FUCK!!!”

Then they start going through my canvas artworks and claim I’m going to be selling my artwork in the USA. I explained that one of them was going to be a gift to Tommy Chong, but I bought a selection for him to choose from. Both officers laughed at me, and one of them goes, “I suppose you know Snoop Dogg, too?” And they laughed with each other.

I looked at him – and I remember this clearly – I looked that idiot deadset in the eyes, and he kind of looked away from me. Then, I said, “No, I don’t know him, but I have drawn numerous artworks that his name has appeared on.” Anyway, they didn't believe me, and neither of them bothered to actually check. They didn't care. So, I was taken back to the cell, locked in there for hours. Then, I was removed from the cell, and was told I was not going to be given entry to USA. Then I was walked through LAX with two armed guards to a connecting flight.

The whole trip just ended up going bad. Every single thing that could have gone wrong went wrong. I was actually just super happy when I was home and back in my house with my wife and son. To this day, I haven't bothered to have my lawyer get me processed back into the USA yet, but I should probably sort it out someday soon. 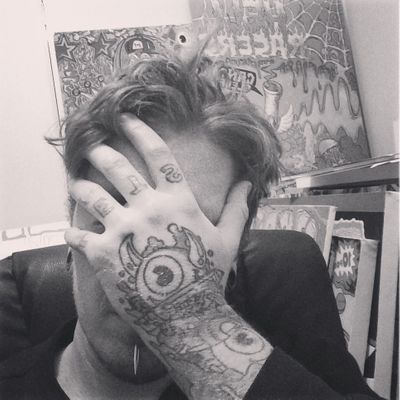 As far as poster art, you’ve been busy — and all over the place. Besides Kushstock and Hash Bash, what other cannabis event posters have you been working on?

Yeah, posters keep me busy. I fuckin’ love drawing posters. I been pencilling up some stuff for Canapa in Mostra, Italy, then just had some more South American posters drop.

The HHI Expo in Australia has a new one about to drop, as well as Medicated Mondaze up in the Bay Area. That was a cool one, kinda hard to read, but definitely cool. Also, Dabbentines from Colorado and the 20 year anniversary poster for the Champs trade shows. That’s pretty much it as of late. 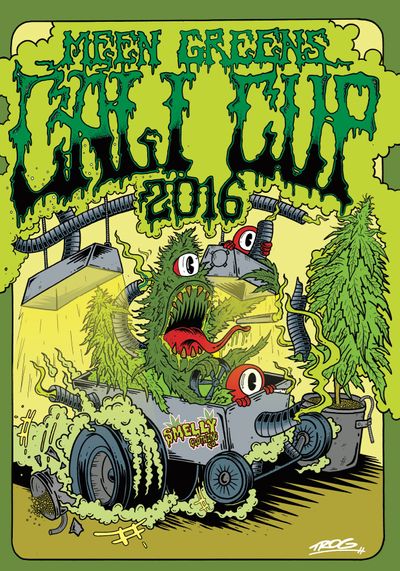 One of your influences, comix artist Robert Crumb, was rarely interviewed by cannabis and/or counterculture journalists through the years. He usually avoided a media presence in general. How do you view media attention?

He is definitely one of my biggest influences. I have idolized the art of Robert Crumb from the first moment that I ever viewed his art. My own art would not exist if it wasn't for the styles of those guys who I was inspired by.

If you’re an artist, you’re different. You view things differently, you look at things differently, and you’re to some degree eccentric. Media attention is weird, at times. I always try and give the person doing the interview something they can work with. If someone has taken the time and effort to interview or run media on my art, then I need to show them the respect to work with them so they get the information they need. 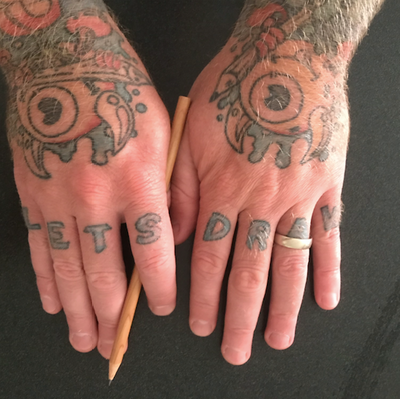 Do you ever feel like you should’ve been alive during the ‘60s, when psychedelic graphic art was in its Renaissance period, more or less?

It's definitely the era that gave me my style, but I’m stuck doing psychedelic cartoon poster art in the period when cannabis prohibition fell worldwide. I can handle that.

4/20 falls on a Saturday this year. Where will you be spending your 4/20 holiday?

Haven't even thought about it yet. Hopefully drawing.

420
INTERVIEW
BOOK
ART
MORE...
Benjamin M. Adams
FOLLOW
Benjamin Adams is a freelance writer whose work has appeared in a slew of publications including CULTURE, Cannabis Now Magazine, and Vice. Follow Ben on Twitter @BenBot11
Share this article with your friends!
AD
By using our site you agree to our use of cookies to deliver a better experience.
Accept
Decline
MORE FROM MERRY JANE