CULTURE
Are “Smart Cart" Vapes Legit? And What Do Fakes Look Like?
AD
If you’ve got a Smart Cart vape, you’re almost certainly puffing on a black market product. But what exactly are the tell-tale signs that make this phony brand, well, phony?
Published on October 9, 2019

Let’s start with an important caveat for today’s vape lesson: All Smart Carts, which are supposedly produced by a California dispensary called Smartbud, are fake. As in, all Smart Carts are unlicensed, black market products that are not tested for safety.

So, to spot a “fake,” just spot a Smart Cart. That said, there are now counterfeit versions of this popular unlicensed brand — so you may be dealing with a knock-off of a phony brand. A meta-fake vape, if you will.

Smart Carts are supposedly manufactured by Smartbud, but neither Smartbud nor Smart Carts show up as licensed cannabis businesses at the California Bureau of Cannabis Control. There is one dispensary in LA called the Smart Collective Corporation, but it has no association with Smartbud or Smart Cart products.

How Can You Tell That Smart Carts Are Fake?

The big giveaway, besides the fact that you’re looking at a Smart Cart to begin with, is the labeling on the packaging. Smart Carts packages have THC contents printed directly onto the package. Printing THC contents or other lab test results into the package just isn’t done in the regulated weed industry. Since lab tests will vary with each batch, packages or products should have stickers presenting the lab test information; it should never be printed directly onto the box.

The second giveaway is that the Smart Cart label directly rips the Smart Water logo… a no-go if you’re a legal company. The third giveaway is the oil thickness. The oils in Smart Carts are usually much thinner and “runnier” than the oils found in legit vape cartridges. However, since illicit vape cart manufacturers can add thickening agents like vitamin E acetate to the oil, going by oil consistency alone isn’t the best way to spot a fake cart.

The fourth giveaway is your state of residence. If you bought Smart Carts (or any carts) in a state where weed isn’t legal, then you’ve likely got an unlicensed product.

And the fifth big giveaway: Did you buy your Smart Carts from a licensed, legitimate dispensary? If the answer is no, then you probably have an unlicensed and untested vape cartridge in your hands.

A tried-and-true licensed vape company will have a website that lists all local retailers who are authorized to carry and sell their products. There should also be a contact form or phone number so you can reach out to the company directly to confirm whether or not your products are licensed, tested, and legal. 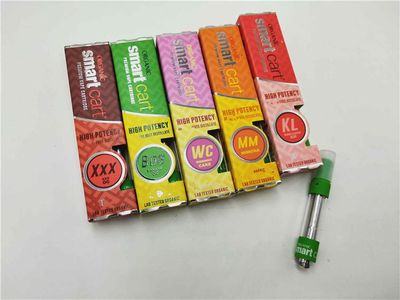 Why Should I Care If My Carts Are Fake or Real?

Since unlicensed, black market vapes don’t undergo lab testing and aren’t regulated, you have no idea what’s in them. Given that there’s a vaping lung illness epidemic rampaging across the US — an illness that has hospitalized over 1,000 people and killed at least 23 — and that this illness is likely being caused by a contaminant that may only show up in black market carts, you should probably stick with the real stuff. How do you know if you’re dealing with licensed, tested product? First, look for stickers either on the outside of the packaging or inside of it, on the product itself. The sticker should contain lab data as well as a black triangle with a weed leaf and an exclamation point inside of it. Somewhere outside of this triangle you should see the letters “CA.” This is the official, state-approved sticker for all legit and tested marijuana products in California.

Second, only buy from licensed dispensaries. If you live in California, there’s a master list of all licensed weed companies in the state. You can also cross-reference the business’s weed license at the Bureau of Cannabis Control.

BLACK MARKET
VAPING
CARTRIDGES
BOOTLEG
MORE...
MERRY JANE Staff
FOLLOW
MERRY JANE is based in Los Angeles, California and is dedicated to elevating the discussion around cannabis culture.
Share this article with your friends!
AD
By using our site you agree to our use of cookies to deliver a better experience.
Accept
Decline
MORE FROM MERRY JANE