CULTURE
Are Exotic Vape Carts Real and How Can You Spot If They’re Fake?
AD
Be wary of any marijuana product with cartoons on the package….
Published on November 20, 2019

The vape cart brand known as Exotic, or Exotiq, features colorful, fun packaging. And reviews of its products online rave about the cart’s flavors and potencies. But are Exotic vapes a real, licensed brand? Or is it another fake brand taking advantage of unsuspecting buyers?

Let’s clear the smoke here: Exotic brand vapes are unregulated, illegal, fake vapes. They aren’t licensed, they aren’t lab tested, and if you’re caught buying or selling them, you could be answering to Johnny Law.

While it’s easy enough to assume Exotic vapes are fake, how can you tell? Here are a few dead giveaways…. 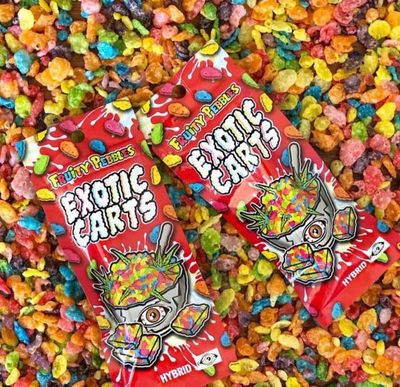 A few years ago, several marijuana edibles companies in Colorado branded their packaging to look like mainstream candy brands from Hershey’s. Hershey’s sued these companies for simply copying its products likeness, including colors, fonts, logos, designs, and mascots. The court ruled that since these products were manufactured for profit, and didn’t offer any artistic or social commentary, that they violated Hershey’s trademarks.

Some Exotic vape packages bite mainstream trademarks. For instance, one flavor is called “Fruity Pebbles,” and its package looks an awful lot like the front sides of a Fruity Pebbles cereal boxes.

Legit, licensed weed companies are fully aware of this trademark issue, and they no longer would offer something like a Fruity Pebbles vape that mimics the actual cereal box. Highly publicized lawsuits have that effect on compliant businesses. 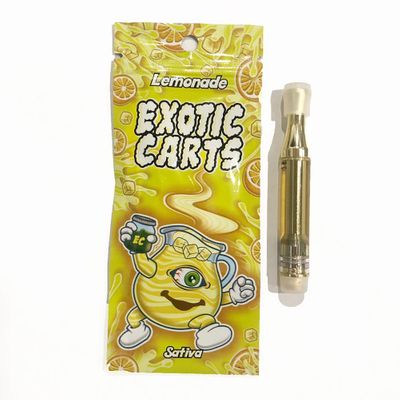 More on the Packaging

Some Exotic vapes come in sealed, plastic bag packaging that you rip open. This style of packaging comes with wild designs, like a yellow lemonade cyclops version of the Kool-Aid Man holding a green, bubbling, toxic-looking concoction in his hand that's labled with the letters "EC" on it, which obviously stands for "Exotic Carts." It's also probably a representation of the type of poison oil that's loaded into their vape carts, so...

Other Exotic vapes come in boxes printed with fruit, slushies, gushers, or other luring imagery on them. What do they all have in common, you ask? That damn stoned cyclops eye. 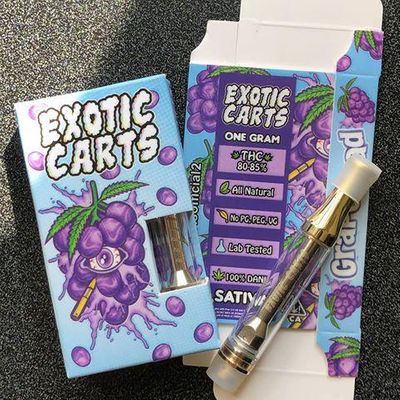 Exotic Carts Has a Website, But It’s Got Bad Info

Many fake cart producers don’t have websites for their products. Some do, but closer inspection will reveal something shady is going on, and Exotic carts are no different.

Check out the Exotic carts website. Besides the piss poor design, it has no company information, no list of authorized retailers, and most telling of all, it says only visitors 18 years or older are allowed at the site. 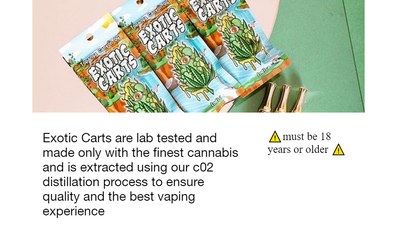 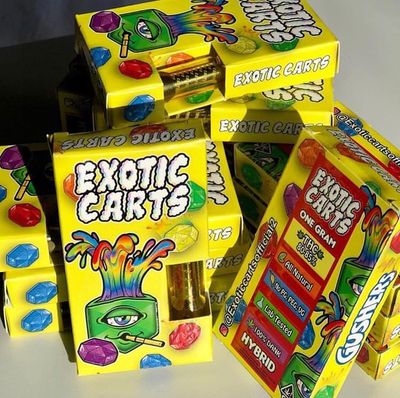 Exotic Carts Packages Have THC Values Printed Directly on Them

One telltale sign that a vape brand is fake is if it’s missing lab testing data. Lab info will always be printed on a sticker found somewhere on the packaging, since each product batch will generate different lab results.

Now, the Exotic carts website says that all of its products are lab tested. That’s BS, but the brand has THC values printed on the package! That’s the same thing, right?

THC values are never reported as ranges, which Exotic carts does. You shouldn’t see THC reported as “80-85%” or something to that effect. Rather, there should be a single, solid value (e.g. “80% THC” or “100mg THC”) followed by some error value (“+/-15%”). State weed regulators don’t want customers playing guessing games with THC doses, which is what reporting the value as a range does. Even dosing just 5-10mg from what you’re used to can lead to a really unfun experience, if you’re sensitive to THC.

There’s a vaping health crisis occurring in the US right now. The vaping injury/illness, which is caused by vaping certain dangerous products, has sent over 2,000 people to the hospital and killed at least 43. Doctors believe that the damage caused by this illness is not reversible, and recently, one patient required a double lung transplant to survive.

Authorities still don’t know what’s causing the vaping health crisis, but there’s good reason to suspect it’s being caused by unlicensed, untested vapes sold on the black market. The Centers for Disease Control is advising everyone to avoid vaping altogether – but if you’re going to insist on vaping your weed, stick to the licensed, lab-tested brands available in your state. Or you can skip the pre-filled cartridges and just vaporize pure flower instead.

VAPING
CARTRIDGES
SEO
FAKE VAPE CARTS
MORE...
MERRY JANE Staff
FOLLOW
MERRY JANE is based in Los Angeles, California and is dedicated to elevating the discussion around cannabis culture.
Share this article with your friends!
AD
By using our site you agree to our use of cookies to deliver a better experience.
Accept
Decline
MORE FROM MERRY JANE