CULTURE
An Inside Look at America’s First Massive Solar-Powered Cannabis Grow
AD
In an industry plagued by waste and environmentally-unfriendly practices, Solar Therapeutics demonstrates that it’s possible not merely to grow cannabis in a sustainable manner, but to do so on an enormous scale.
Published on February 12, 2020

All photos courtesy of Solar Therapeutics

Earlier this month, Solar Therapeutics, a large-scale cannabis grow operation, manufacturer, and adult-use store in the town of Somerset, an hour south of Boston, turned on its own onsite power plant, referred to as a microgrid. Along with solar panels and other savvy efficiency mechanisms like water recycling and LED lighting, the microgrid has already enabled the company to cut its emissions in half. It’s a promising example for an industry that has largely failed to change in the face of escalating climate-related disasters.

And the stakes are getting higher every day: As more states legalize cannabis, emissions are virtually guaranteed to climb. One 2018 paper shows that the industry's energy demands could jump by 162 percent by 2022.

“As more states rush to legalization — and perhaps even some day the feds — drug policy and environmental policy must be harmonized,” wrote the renowned climate scientist Evan Mills for the Future Cannabis Project in 2016. “Until then, some of the nation’s hard-earned progress towards climate change solutions is on the chopping block as regulators continue to ignore [the cannabis] industry’s mushrooming carbon footprint.” 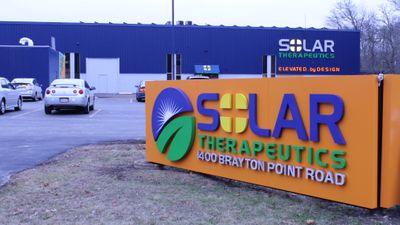 Emissions Are Huge — and Still On the Rise

Cannabis is currently one of the most unsustainable industries in the country; its greenhouse gas emissions are on par with data centers. Growing a pound of pot indoors, for instance, has a carbon footprint equal to driving across the country seven times.

The largest portion of these emissions can be traced to high-pressure sodium lighting, which can account for more than half of an indoor grow’s electricity. These are roughly 500 times stronger than a reading light.

Additionally, heating, dehumidifying, and cooling indoor grow rooms all demand significant energy. Naturally, outdoor grows are less resource intensive, but tend to only be effective in select climates; while roughly 40 percent of California cannabis is grown outside, the East Coast didn’t get its first outdoor grow until last year, outside of Baltimore, Maryland.

In Denver, for instance, 4 percent of all electricity use is cannabis-related. And because Colorado, like most American cities, relies heavily on natural gas and coal to power its electric grids, these operations add to the growth of greenhouse gas emissions. At one point, it was even suggested that cannabis grows were contributing to Denver’s notable ozone problem.

“The dirty little secret of the marijuana industry is that embedded in each average indoor-grown plant is the energy equivalent of 70 gallons of oil,” wrote Evan Mills, the climate scientist, in the aforementioned essay.

But in an industry plagued by waste and environmentally-unfriendly practices, Solar Therapeutics demonstrates that it’s possible not merely to grow cannabis in a sustainable manner, but to do so on an enormous scale. Ahead of the Pack

While Solar Therapeutics intended to incorporate solar panels into the operation from its inception, the company’s full-on embrace of renewable power was the result of a fortuitous accident.

After acquiring the grow facility in January 2018, the company’s CEO, Ed Dow, was told that the existing electric grid couldn’t provide enough power to support the operation, and that it would take $3.5 million and two years to make the necessary infrastructure improvements. The news was a “total shocker,” and forced the nascent company to make a bold pivot.

“We were already halfway built. At that point there was no turning back,” Dow explained. “It inadvertently shaped Solar Therapeutics the way it is today. Before… we were never intending to go entirely off the grid. We were forced to.”

Construction began soon thereafter. Dow is a former engineer, and brought a lot of his own experience to the table. Along with his partners, he looked at multiple microgrids and researched lights and other efficiency measures. Solar Therapeutics' retail store opened in September 2019, and its first crop of 1,500 plants went into one of the finished grow rooms last week. Once operation hits full capacity, there will be fifteen grow rooms. (Because Massachusetts does not mandate cannabis operations to be vertically-integrated, Solar Therapeutics can sell its flower wholesale. The current going rate? Up to $4,200 a pound.) 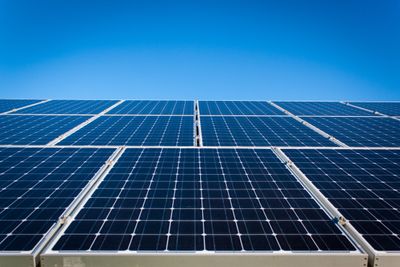 When Dow took me on a tour of the space on a gray February afternoon, it quickly became evident why an electric company would be daunted by the project: Solar Therapeutics is gargantuan. At 66,000 square feet, including staff offices and the retail store (with two-thirds of that being potential grow space), it’s nothing short of a full-on weed factory. Yet, at every step of the process, the company has found ways to both increase energy efficiency and lower its carbon footprint.

Beyond a colossal array of transformers, back-up generators, and semi-autonomous storage batteries, Solar Therapeutics boasts a full four acres of solar panels on its property, as well as additional panels covering nearly all of the 66,000-square-foot roof. Liquid chillers harness outside air to provide natural cooling to the building.

Then there’s the microgrid itself, situated on the edge of the property. From a distance, it looks like a big blue shipping container, but an open door reveals a whole universe of humming parts inside. This miniature power plant is currently fueled by natural gas, but because it’s so close to the building, minimal energy gets lost on its journey inside. The microgrid can produce nearly 5 megawatts; for context, one megawatt can power a thousand homes. Furthermore, the microgrid traps its own excess heat, which is used to heat the building. This energy is subsidized by solar, and Dow hopes that eventually battery technology will improve so that the business can run entirely on solar power. 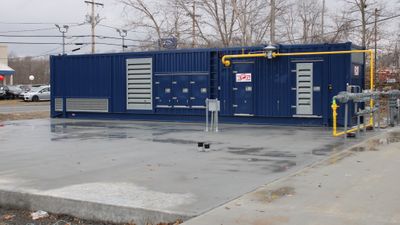 Back inside, Dow showed off the finished grow rooms, which utilize high-efficiency Fluence LED lights to lower energy costs. Each room boasts big windows facing hallways so that, eventually, visitors to the space can get a peek inside the massive operation.

Solar Therapeutics will use roughly 10,000 gallons of water a day once all of their grow rooms are operational. Air handlers will reclaim 90 percent of the water used in those rooms, filter it, and then reintroduce it to the building’s freshwater supply.

“Marijuana plants are absolute power hogs. [The industry is] putting out tons of emissions that no one is talking about,” Dow pointed out. “We’re way offsetting that, on the biggest scale around. You could be looking at a facility a fraction the size of ours putting out two, three, four times the emissions.” 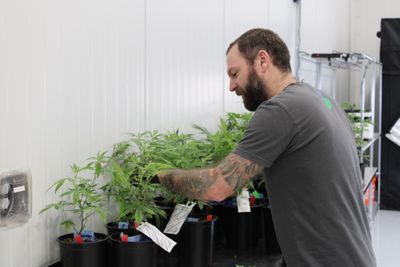 The Rest of Massachusetts' Cannabis Industry Is Following Suit

While Solar Therapeutics is ahead of the pack, all other cannabis operators in Massachusetts are being forced to take similar measures, whether they want to or not.

The state’s cannabis industry is overseen by the Cannabis Control Commission (CCC), a five-member body that regulates everything from allocating business licenses to managing a comprehensive equity program. Since Massachusetts is committed to lowering its emissions as part of the Global Warming Solutions Act (GWSA), cannabis businesses are required to comply with stringent regulations to keep emissions within target reductions. Earlier this month, the CCC unveiled its new environmental guidelines, which require operators to ensure that virtually every facet of their business — from architectural design to transportation and lighting — is in compliance with GWSA targets.

“We do have an obligation to do this,” Commissioner Kay Doyle, a former counsel to the state Department of Public Health, told MERRY JANE in reference to the GWSA. “If you’re coming into Massachusetts to do business [in cannabis], you have to be aware that [the state] is dedicated to battling climate change and reducing our greenhouse gas emissions.”

“One of the easiest ways to do that is just start off like Solar Therapeutics did on the right foot and be conscious of energy efficiency options,” she pointed out. 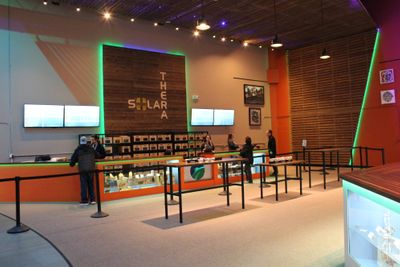 The CCC has worked with outside consultants to facilitate compliance measures, like implementing a lighting cap of 36 watts per square foot of a grow. To do so, it partnered with the non-profit Design Light Consortium to provide operators with workarounds and multiple solutions. “Folks who are looking to comply can say, ‘I’m using equipment rated to be energy efficient on the Design Light Consortium list [that don’t adhere to the 36 watt rule].’ If you're using that lighting, you don't have to go to 36 watts,” Doyle explained.

There are ample financial incentives to go green, too. Solar Therapeutics has already earned a million dollars in energy rebates from its local utility company. But it can be extremely difficult for businesses to afford those up-front changes, raising questions of how smaller players in the industry will respond to energy compliance measures. “I don't know how to get around the front-end money,” Dow ceded.

The CCC is using a combination of incentives and punitive measures to ensure that operators comply. “We have a series of actions we can take on someone’s license, including fines or sending an order directing them to come into compliance — all the way down to suspension,” Doyle explained, before adding that she would rather provide positive reinforcement like leadership awards.

Deadlines are fast approaching for operators to comply: Adult-use stores have until July 1st; they were notified in March 2018. Medical dispensaries had less notice, and have until next January to meet the guidelines.

The Threat Is Real

Speaking at the World Economic Forum in Davos earlier this month, former US Vice President Al Gore made a plea for sustainability in the model of a war effort.

Solar Therapeutics is by no means alone in its effort to do just that. Across the country, cannabis companies are finding innovative ways to reduce their impact on the environment. In California’s Emerald Triangle, regenerative farming techniques that maximize soil health for outdoor grows are gaining attention, while UC Berkeley researchers have a plan to develop THC from yeast in a lab. A Colorado dispensary is recycling carbon dioxide from a nearby brewery, and indoor grows in the state are embracing translucent roofs, which can reduce artificial light use by as much as 80 percent. Elsewhere, brands are embracing reusable packaging, and organizations like the Resource Innovation Institute are helping indoor and outdoor grows monitor their efficiency efforts.

And Solar’s business model is catching on, too. Dow has already been approached to expand the Solar Therapeutics brand to other states. “That’s the goal right now,” he said.

Studies have shown that across the planet, it’s cheaper to adjust to a changing climate than fix the situation retroactively. Although cannabis remains slow to adjust to a changing world, regulations like the CCC’s, as well as a greater understanding of how to grow cannabis efficiently, financial incentives for running a solar grow, and innovations across the board could go a long way towards steering the industry in the right direction. As Solar Therapeutics has proven, it’s more than possible.

BUSINESS
ENVIRONMENT
MASSACHUSETTS
INNOVATION
MORE...
IN THIS STORY
CBD
Click to shop at our CBD store
Max Savage Levenson
FOLLOW
Max Savage Levenson writes about pot and music. His work has appeared in Pitchfork, Bandcamp, Leafly, and NPR. He co-hosts Leafly's pop culture podcast "The Hash" with David Downs. His dream interview is Tyler the Creator.
Share this article with your friends!
AD
By using our site you agree to our use of cookies to deliver a better experience.
Accept
Decline
MORE FROM MERRY JANE