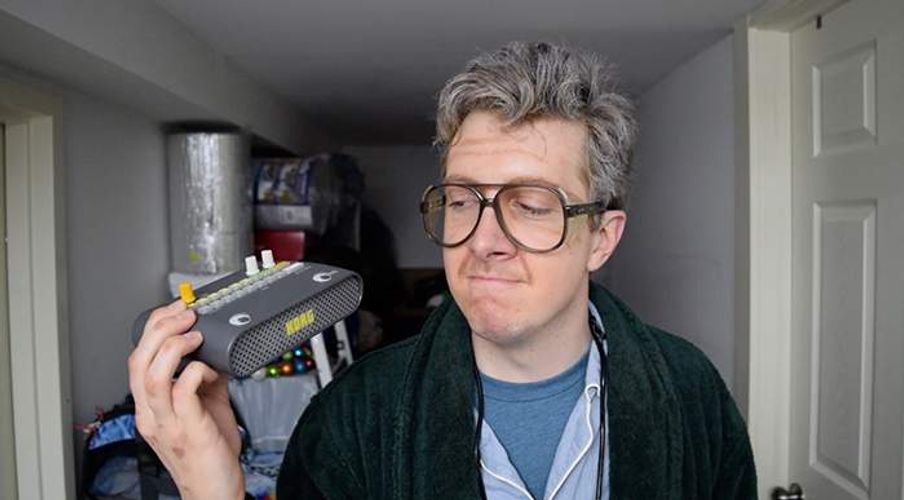 Go BTS on “Cody VS KORG,” the first of eight videos in the hilarious web-series inspired by earnest product reviews.

Go BTS on “Cody VS KORG,” the first of eight videos in the hilarious web-series inspired by earnest product reviews.

When not writing articles on witchcraft, déjà vu, music, and menstruation, Brooklyn comedian and MERRY JANE contributor Lauren Maul creates musical masterpieces. Inspired by an earnest product review she read on Amazon while high, she created and composed the Amazon Reviews: The Musical!, a web-series of eight hilarious and heartfelt videos that put people’s very personal comments to song for what can only be described as artistic genius. Each week, she will share a new video on MERRY JANE, along with the stories behind the making of them.

In 2014, I found a KORG KR mini Rhythm Machine on Amazon. The machine itself is admittedly not so great—it’s confusing to use and the sounds it creates are reminiscent of a failed Nintendo game soundtrack. But while I was vaping and scrolling through the reviews for the product I stumbled upon one review that BLEW MY ENTIRE MIND. This review wasn’t written by someone trying to be funny, like the infamous reviews of the 3 Wolf Moon T-Shirt. No, this review was deeply and genuinely sincere—a rare thing indeed in this age of snark.

The review told the tale of an elderly man struggling with his new electronic rhythm machine. He had bought it to help keep the beat at an upcoming piano concert but the darn thing just would NOT cooperate. He tried everything—adapters, batteries, and more batteries. Nothing worked. He couldn’t even return the device because it would be too much of an “ordeal.” At the end of the review, there was a response. “Cali Gadget Guy” asked earnestly: “Did you turn it on with the on-off button on the back?” And...scene!

This review has everything a writer loves: a solid beginning, middle, and end, a relatable hero struggling with a daunting task, and emotions galore. I was so moved by this elderly man’s story that I turned his review into a song and performed it at comedy and music shows around New York City. Audiences never believed me when I told them it was a real Amazon review. “Surely you’re making that up! It’s too good!” But the review is that good. Because online reviewers are really good artists.

The stoner-hippie in me knows that everyone is an artist. And I’m not the only one who thinks so. The artist Ai Weiwei said in a Harvard Business Review interview, “Creativity is part of human nature. It can only be untaught.” Due to a sad mix of strict societal expectations, a lack of arts education in our school systems, and monetary restrictions, many people lose touch with their creative side. But it’s still there…and comes out whenever humans combine emotion with expression. Just like we do when we write Amazon reviews.

The “Cody VS KORG” cast in action. Image via Lauren Maul

I decided to find more of these reviews to turn into songs—no snarky ones, just the beautiful, earnestly sincere ones. And I found A LOT. So, last summer I collaborated with the award-winning director/choreographer Wendy Seyb to turn these review-songs into a musical web-series: Amazon Reviews: The Musical! We gathered a band, a cast, a crew, and a troupe of professional dancers, then filmed it in Brooklyn with the help of some magical stones (see below) and lots of googly eyes.

To fund this creation I used a combo of funds raised on Indiegogo and a lot of my own savings (we all know about scared money). Since we couldn’t afford to be a real union production, I did my best to recreate friendly union conditions in the workplace. I made it a priority to pay, insure, and feed delicious food to my team.

When you treat people super well it establishes an environment for them to make their best art AND you have more fun. Our PA Haley called the whole filming experience a “grown-up summer camp!” After five days of camp/filming, we ended up with eight wacky episodes, totalling 40 minutes of mirth. We were on time, under budget, and over-fun. I hope you enjoy Amazon Reviews: The Musical!’s pilot episode, entitled “Cody VS KORG,” and I hope these reviews inspire you to make your own art, whatever that may be.