CULTURE
A Trippy Talk with the Deadheads Behind the Largest Grateful Dead Exhibition Ever
AD
“The Deadhead Collection: A Visual Experience," is currently on view in Brooklyn. MERRY JANE chatted with curators Taylor "Deadhead" Welch and Fernando Lions about their long, strange trip leading up to the show.
Published on October 28, 2019

All photos by OK McCausland

There’s a newfound infatuation with dancing bears and all things tie-dyed among hipsters, hype beasts, and A-listers alike. From Jonah Hill’s “obsession” with tripped-out streetwear (see also: Kim Kardashian), to the New Yorker “finding authenticity” in the clothes by Online Ceramics, it’s clear that psychedelic culture and Deadhead fandom has dosed the millennial masses in recent years. Plus, who could forget the fact that John Mayer, everyone’s favorite sartorial sociopath, is now heading Dead and Company?

Despite Deadhead culture suddenly catching the eye of celebrities and Conde Nast-owned publications, psychedelic art objects like vintage Dead shirts and illustrated blotter sheets continue to occupy a strange, distant corner of the art world. Far from the famous halls of major museums or the white walls of Chelsea galleries, most of this art is preserved in networks of private collections maintained by diehard fans — many of whom are relics of the ‘60s themselves.

“We’ve all been dreaming of bringing Grateful Dead images into the fine art realm, but this is the first time something of this magnitude has ever been done,” said Fernando Lions. “This show has become like a really special flower.” 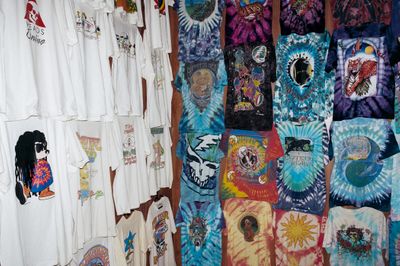 On display now through November 3rd in Williamsburg, the exhibit primarily features the enormous ephemera collection of Taylor “Deadhead” Welch, a 25-year-old wunderkind who sells vintage Grateful Dead shirts, alongside photography and video collages by Joyce and Lions.

The show coincides with the Dead & Co performing at Madison Square Garden on October 31st and November 1st. Now, rumors are swirling about a Shakedown Street potentially forming outside the exhibit (though not formally attached to it, for security reasons). Fans are expected to sling their own Deadhead merch, and there’s the possibility of dreaded couples selling grilled cheese sandwiches and nitrous balloons from the back of vans parked nearby the gallery space.

While Lions can’t officially endorse a lot popping up (though he’s no stranger to ‘em), he explained why these aspects make the exhibition one for the history books. “What's really beautiful about this show is that it's from the perspective of the Deadhead. It's not necessarily about the band, it's about the fan, the obsession, the passion and stuff like that.”

He continued: “The name ‘Heads to be Heads’ refers to the fact that you can be a head about anything, whatever you're into. You know, I'm a tattoo artist, so I’m a tattoo head. I'm a graffiti writer, so I’m a graffiti head. We're hoping to develop a platform where by making art and displaying art, we give everyone the opportunity to create more.” Above, Fernando Lions of Heads Will Be Heads, shot by OK McCausland

Known for his iconic @Deadhead handle, Welch and his epic collection of trippy shirts embody the reason psych art shows are important. Sure, he has a shortlist of celebrity clients including Jonah Hill and Matty Matheson, but it’s his authentic enthusiasm for the subculture (past and present, Dead and alive) that is infectious and ebullient. Not only does his collection push this underappreciated-yet-constantly-imitated aesthetic out the shadows, it encourages community and a way to experience art outside the institutional blue-chip gallery world. Name another exhibition where attendees are more likely to be on LSD than drunk off white wine?

Amidst the chaos of mounting one hundred pounds of shirts Welch brought from his collection, MERRY JANE caught up with him over the phone to talk about today’s psychedelic renaissance, the art of collecting, and why the Grateful Dead are still a powerful force in culture, even after 50 years on the lot. 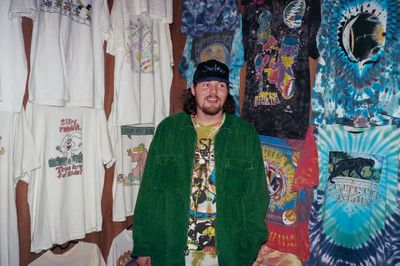 Above, Taylor "Deadhead" Welch of Heads Will Be Heads, shot by OK McCausland

MERRY JANE: How did you originally get into the Dead?

Taylor “Deadhead" Welch: I got into the Grateful Dead when I was around 14 or 15. My grandfather passed away, and my mother mentioned to me that he had the same birthday as Jerry Garcia. I Googled it and she wasn't lying. I took it as a sign.

How long have you been full-blown in the scene? Did you dive into it headfirst as a teen?

Yeah, pretty much. I’m 25 now, so it’s been almost ten years. I've been collecting shirts for probably six or seven years. Then, I've been showcasing my collection and archiving online for three or four years. That’s really how all this spiraled, by sharing and meeting like-minded individuals, and just manifesting this experience I have going on. 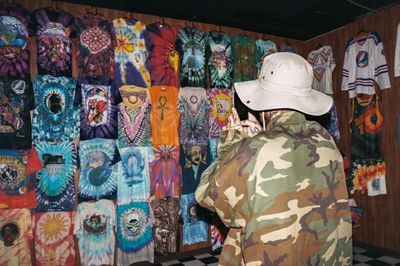 What goes into collecting these shirts?

Well, I’m strictly vintage, so I do a lot of collecting online. I’ve definitely bought a lot of reprints and ended up throwing them away or donating them. On the lot, the iconic images have been reprinted over and over, so there’s something about having that real vintage shirt. You can really feel their energy, and the energy of the people who owned them. I think of shirts like crystals in that they are physical objects on this Earth capable of holding energy.

How can you tell which ones are legit and which are reprints? Is there a process you go through to vet them?

Definitely. Other than me just knowing what’s what from being a collector for so long, there are telltale signs. On the sleeves, there will be single stitching on the good stuff, whereas modern day procedure uses double stitching because it holds up more. Then, obviously, the tag. If a shirt is missing a tag and feels a little bit harder, it’s probably a reprint. Honestly, you can hand me a shirt and I can tell you what decade it's from based on the feeling of the cloth alone. 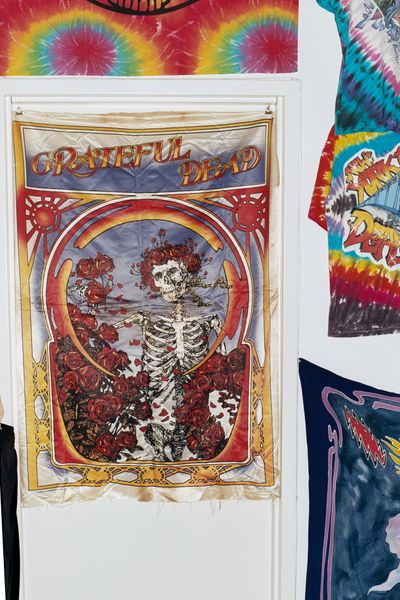 Why is the Grateful Dead still such a powerful force in counterculture, and also in the mainstream more than ever?

I feel it’s just one of those instances where the music transcends boundaries and doesn’t discriminate. You have the old heads who saw the original Grateful Dead. Then they all grew up, had kids, and their kids got exposed to it. Then there is this whole new resurgence of Dead and Company that really started it over again. You know, everyone brings their dad to a Dead and Co show, so it’s this endless cycle that moves through the generations. It’s a culmination of so many genres of music and generations of fans, connected by this grateful, appreciative vibe that’s inherent to the culture.

How do you feel about the revival of Dead culture among the high-fashion crowd?

I have mixed emotions about it, but I try to stay positive and think about the silver lining. As far as pop culture exposing people to the iconography, it might spark an interest to check out the music. I mean, the first time someone wears a Dead shirt and gets asked if they like the band and they don’t know what to say, they’re most likely going to go home and figure it out. Deadheads are so enthusiastic and familial; whenever I see someone wearing a shirt like that, I run up to them and spark a conversation. So, even if those people don’t know much about it now, hopefully they’ll be inclined to learn.

What does the Deadhead community think about John Mayer? It seems ironic that an artist whose career has been defined by mainstream success is heading the most iconic countercultural project of all time.

Yeah, it's ironic in its own construct. But there’s no general consensus on John. Every person has their own opinion about it. I don’t think there’s a collective conscious as far as that goes. I have my own personal thing about it, but he’s also enabled and created a space for a lot of my friends to showcase their art. I'm definitely thankful for that. But uh, yeah, I don't know. Everyone's entitled to their own opinion. From the mass dissemination of seeds and strains to the rise of glass blown pieces, lot culture helped shape the weed industry we enjoy today. Can you talk about the intersection of cannabis culture and Grateful Dead culture?

It’s like peanut butter and jelly, you know what I mean? Especially with glass. As far as I know, I’m pretty sure Bob Snodgrass was the first person to really start selling glass spoon bowls and shit like than on the lot at Grateful Dead shows. The cultures came up together, so there’s this deep bond.

Cannabis is just one of those things that inherently makes everything better for the majority of people on the planet. So when you pair some of the best music on the planet with some of the best medicine of the planet, it’s kind of just a win-win. You don’t have to smoke weed to be into the Grateful Dead, but it definitely helps. 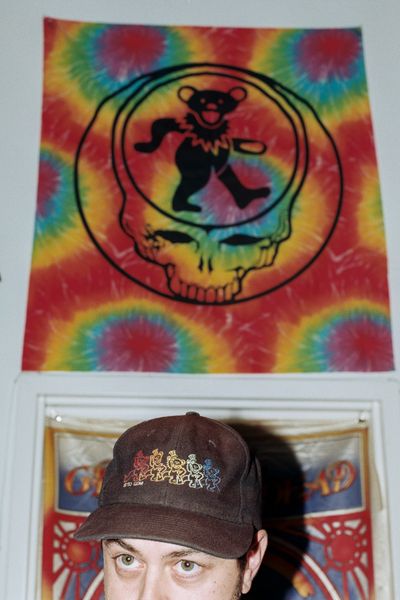 This exhibit is exciting because the majority of psychedelic art and ephemera exists in underground networks and private collections. Shows like “The Deadhead Collection” bring this previously-inaccessible art to light. Can you talk about the importance of showing collections of psychedelic art?

Right now, in terms of the whole resurgence of the aesthetic, shows like this are extremely important. To walk into a room with one of the most extensive collections of this kind of art, you get to see where all this new shit came from, where all this fashion was derived from. These shirts have obviously influenced a whole new wave of clothing, so you’re getting an authentic look at what’s impacted style today.

Can you talk about how you started working with Heads Will Be Heads and how this show materialized?

Heads will be Heads is a collective run by my tattoo artist Fernando Lions. Basically, I ended up trading Fernando a shirt for a tattoo a few years ago, and we ended up becoming really good friends. We’re both really interested in the Dead and its surrounding culture. We really wanted to provide a platform where we could showcase this to a mass audience, and New York is probably the best place to do it. A lot of other people have had this vision, they just haven’t executed it. To materialize this is really exciting. How much of the collection will be for sale?

I would say about 20% of the shirts exhibited will be for sale. There’s going to be a lot of stuff on the wall in a purely gallery setting, some of which you’ll be able to buy — but not until after the show. I’ll also have a rack of some pretty sweet shirts for sale, as well.

There’s been talk of a lot forming outside the exhibition. Is that in the works?

Yeah, there’s going to be a Shakedown Street literally right across the street from the show. It’s not formally tied to the exhibition, but it’s going to be a literal movie. Fucking sick. What’s next for you and your collection?

I mean there's always plans in the future to do other shows, but I’m actually opening up a vintage head shop and counter culture museum in LA next year. That will be a full-time gallery, basically what we’re doing here, but open year round in a brick-and-mortar store.

“Heads Will Be Heads Presents: The Deadhead Collection” will be on view until November 3rd in Brooklyn, New York. For more on the exhibition, visit the Instagram here

FASHION
HISTORY
CULTURE
POP CULTURE
MORE...
Lindsay MaHarry
FOLLOW
Lindsay MaHarry is a freelance writer based in Los Angeles. Her work has appeared in Vice, The Observer, Bullett, Gawker, Fanzine, and others. Follow her on Instagram and Twitter.
Share this article with your friends!
AD
By using our site you agree to our use of cookies to deliver a better experience.
Accept
Decline
MORE FROM MERRY JANE