CULTURE
A Short History on the Invention and Evolution of Weed-Infused Candy
AD
Cannabis candies take center stage during the Halloween holidaze. But where did they get their start, what did the first weed treats look like, and how have they developed over time?
Published on October 31, 2019

Cannabis edibles often come as sweets like candies, brownies, and chocolates. This is due to the cannabis extract’s strong, bitter flavors, which culinary artists can easily mask with other flavors and heaping teaspoons of sugar. And while we know quite a bit about where cannabis likely originated, as well as the plant’s ancient uses, we know very little about how weed became a food.

Obviously, the first people to use marijuana for medical or religious purposes smoked it, usually by ceremoniously burning it. Or in the case of the nomadic Scythians of the 5th Century BC, they got high in vapor baths (essentially OG hot boxes) instead. Others created oils, salves, or balms with the plant, but the origins of infusing weed’s essence into foods remains historically murky.

So, while the cops and naysayers try to frighten everyone away from legalization with the annual Halloween-weed-candy scare, MERRY JANE is here to provide a little context for how we got to the point we’re at today, where cannabis edibles now make up anywhere from 12 to 15 percent of the regulated market. Estimates project that edibles will corner $32 billion in worldwide sales by 2022. 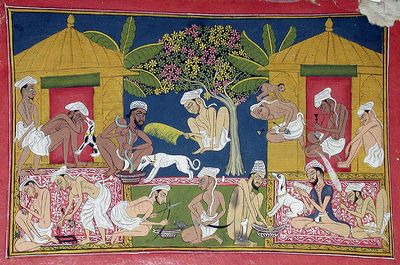 History’s first documented weed edible isn’t a hard candy or baked good. It’s a drink, which is a little ironic, considering that drinkable cannabis products are currently the worst-performing sector in the legal markets.

Anyways, the first recorded cannabis foodstuff comes from India, and it’s called bhang (yes, pronounced just like “bong”). Bhang, which is thousands of years old, is traditionally served during the yearly Holi ritual that reveres Shiva or Kali, Hindu’s destroyer-creator god who just-so-happens to hold weed in such high esteem that it’s one of the icon’s most recognized religious symbols. Even young children are permitted to drink bhang, but only during the Holi festival.

Bhang comes with a simple preparation. Basically, pulverize the cannabis flowers, run them through heated, clarified butter called ghee, then mix the mash with milk, cinnamon, cloves, sugar, and other spices. Special government-licensed stores in India sell bhang for religious purposes, though many are known to look the other way when tourists want to try some just for the heck of it. 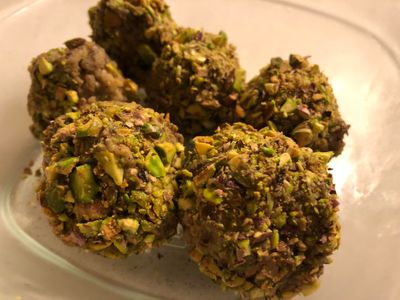 Majoun or majun is a fudgy cake-ball first created by the nomadic Berber tribes in North Africa. Sometime in the 11th century, the Berbers became assimilated into North Africa, with most of them concentrated in the area which we now call Morocco.

We have no idea when the Berbers first made majoun, but we can safely assume it’s been around for nearly a thousand years. Majoun can be prepared without weed, but the traditional recipe calls for cannabis extract (and datura seeds, which can sprout into the powerful hallucinogen known as jimson weed). In 2013, celebrity chef Anthony Bourdain got to see some majoun traditionally prepared in Morocco, but, as he said to the camera, “network standards and practices prohibit me from even tasting this delicious and reportedly mind-altering treat. I'm guessing, anyway. So until I see Chris, John, and Wolf [of CNN] doing bong rips in the Situation Room, I will of course abide by these rules, because that's the kind of guy I am.”

That’s too bad, since majoun is what ultimately inspired the pot brownie’s popularity in the US. More on that later, though.

While Central and East Asia knew about the wonders of weed for thousands of years, it took awhile for the folks in Western Europe (and later the US) to catch on. Cannabis extractions have long been included in foods, drinks, and snacks for medicinal purposes since ancient times, but seeing as most cultures never felt the need to print cookbooks (cooking used to be an oral tradition passed along through families), we don’t know when the first weed candies were made, or who made them.

But we do have old timey advertisements from the 1800s which show that, indeed, cannabis-infused candies have been with us in the West for years. The one featured here came from a Chicago newspaper in 1864. Notice that the “Hasheesh Candy” was marketed for medicinal use, such as treating “confusion of thoughts,” nervousness, and fever, but it was also sold as something to get you thoroughly fucked up: “A pleasurable and harmless stimulant confectualized” for “seekers after pleasure and the marvelous.”

Why did this explosion of weed products occur in the 1800s? It was the time of empires, and Western Europe and the US both busied themselves back then by conquering foreign nations and subjecting those conquered people to colonial worker-ant conditions. Many of these colonies were in Central and East Asia, and the imperialists brought the medicines and traditions from those cultures back to the West. In the cannabis realm, the most famous among them was Dr. William Brooke O'Shaughnessy, an Irish physician who discovered medicinal weed while traveling in India. Sometime around 1841, he brought weed oil back to the British Royal Society, where he pitched it as a non-toxic treatment for cholera, convulsions, tetanus, and rabies.

While we may never determine who first began producing and marketing weed candies back then, we do know these treats were hot items in the 1800s. For instance, the world’s most powerful ruler at that time, England’s Queen Victoria, ate weed-infused chocolate truffles to manage her debilitating menstrual pain.

Gallery — Weed-Infused Food From Our "Baked to Perfection" Column:

We usually think of the ‘50s as an American era filled with god-fearing individuals who attended church every Sunday, dressed the same way, got their milkshakes at the local mod diner, and danced… badly.

Most folks don’t associate the ‘50s with weed brownies, but that’s the same decade our community’s most iconic edible started entering the mainstream.

In 1954, San Francisco’s Alice B. Toklas, most famous for being the life-partner of feminist Gertrude Stein, published The Alice B. Toklas Cook Book. While most of its recipes are fairly sober, one stuck out in the popular imagination: Hashish Fudge, based on a majoun recipe she got from a friend.

Described by Toklas as “the food of paradise,” her Hashish Fudge recipe included nuts, spices, and berries to keep that bitter weed extract off the taste buds. And yeah, weed was illegal in the US back in the ‘50s, so the recipe got axed from the US edition of her book. But it made it into the UK version, and thank goodness for that.

Toklas’s recipe was hit, especially within conservative circles. By 1961, her recipe became so famous that an entire Hollywood film, I Love You, Alice B. Toklas (starring the stellar Peter Sellers) was made with weed brownies serving as the movie’s central premise (and climactic moment). 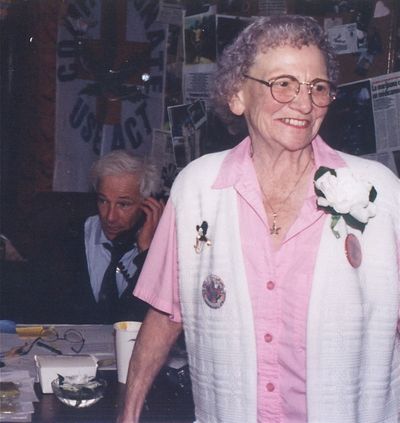 It’s fitting that San Francisco, which was Toklas’s city of birth as well as her homebase, would later become center-stage for the medical marijuana movement in California. During the ‘80s and ‘90s, the Bay Area, long held as America’s safe haven for the nation’s LGBTQ+ communities, got ravaged by the HIV/AIDS epidemic.

At the time, the Reagan Administration did absolutely nothing to curb the epidemic. That left regular folks with big hearts to treat AIDS patients, particularly when medical doctors had no idea what was causing it, much less how to treat it.

One of these loving individuals was Mary Jane Rathbun, better known in weed history as Brownie Mary. Mary volunteered at San Francisco General Hospital, and she was good friends with Dr. Donald Abrams, who worked at the same hospital. She whipped up her own special blend of cannabis-infused brownies and would hand them out at the hospital, hospices, clinics, and homes of AIDS patients to relieve their pain, lack of appetite, and inability to sleep.

Mary was arrested twice in the ‘80s for giving out weed brownies. But her most publicized arrest happened in 1992, and with the help of legendary cannabis activist Denis Peron (RIP), her arrest turned her into a veritable martyr: The American public was not pleased with California cops busting a little ol’ lady who was just trying to help sick people. Her third and final arrest not only catapulted the medical marijuana movement leagues forward, it also reintroduced pot brownies to an otherwise weed-ignorant nation. 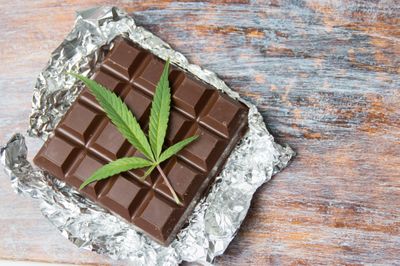 Brownie Mary’s efforts, accomplished with dozens of other patients, activists, and advocates, eventually led to California becoming the first state to legalize medical marijuana in 1997. But it would take another 17 long, arduous years before two US states would legalize recreational marijuana.

At 9AM on January 1, 2014, the first licensed recreational weed purchase was made at 3D Cannabis in Denver, Colorado. The man who made that purchase is a US military veteran, Sean Azzariti. And yes, Azzariti bought some weed edibles during that historic first purchase.

“They were Dixie brand truffles,” Azzariti wrote to MERRY JANE in an email, and Dixie is still one of Colorado’s top-selling edibles brands. “I actually still have them and the entire first purchase, and have been trying to figure out what to do with it. Museums don't want it, and I'm afraid to frame it.”

So, there you have it: Weed truffles were good enough for Queen Victoria, and they continue to make history into the present. And shout out to Westword’s cannabis editor, Tommy Mitchell, for helping MERRY JANE reach out to Azzariti. 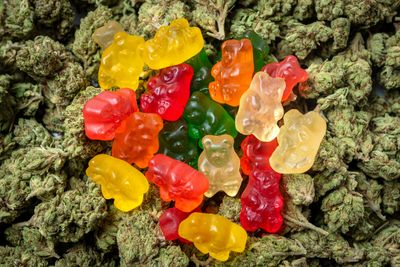 As weed legalization brings technological innovation, cannabis edibles are getting high-tech makeovers, too. No longer must we rely on cooking oils and butters to extract our weed and infuse it into foodstuffs. Now, we can simply sprinkle some cannabinoid powders on our food or stir them into our drinks. And soon, we’ll be seeing GMO weed as an ingredient for cannabis-infused drinks.

For now, there are no restaurants in the US that can cook and serve freshly made weed dishes. This is due to dosing issues, and the impossibility of lab-testing the dishes once they’re cooked. Hopefully, that will change someday in the future, especially since weed has never killed anyone who ate too much.

EDIBLES
HALLOWEEN
HISTORY
MEDICAL MARIJUANA
MORE...
Randy Robinson
FOLLOW
Based in Denver, Randy studied cannabinoid science while getting a degree in molecular biology at the University of Colorado. When not writing about cannabis, science, politics, or LGBT issues, they can be found exploring nature somewhere in the Rocky Mountains. Catch Randy on Twitter and Instagram @randieseljay
Share this article with your friends!
AD
By using our site you agree to our use of cookies to deliver a better experience.
Accept
Decline
MORE FROM MERRY JANE