CULTURE
A Real NYC Weed Dealer Reviews the Season Premiere of "High Maintenance"
AD
"Compared to my life, The Guy is the Vitruvian Weed Man. He’s the platonic ideal of a weed dealer, and we are all but pale reflections of his mathematical perfection."
Published on January 24, 2019

The third season of High Maintenance, HBO’s show about an NYC weed delivery man and his various clients, premiered this past Sunday. It’s all anyone wants to talk about at my job, because I’m also a weed delivery man, just like “The Guy,” played by the bearded Ben Sinclair. Well “just like” sounds a little strong, but it’s close enough.

I’ve been watching the show since it started as an original web series on Vimeo, and it’s been interesting to see High Maintenance develop in parallel with both widespread pot legalization and the proliferation of what some have called “The Golden Age of NYC Weed Dealing.” Plus, the season premiere debuted just a few days after Governor Cuomo outlined his plans for an adult-use cannabis legalization bill in NYC, so there was a lot to think about as I dove into the the 30-minute episode.

Moving into season three, we can feel the show growing away from its original premise. It seems like (based on the preview for the next episode) The Guy will make it back to NYC soon, but we start the season somewhere upstate. The Guy is hanging out in his RV, doing normal person stuff like using Tinder and getting gas. Elsewhere, we watch this other dude named Berg, who we’ve never seen before, walk around his house naked, prepare a hot bath, and then die in the bathtub after lighting up a doob (heart attack it seems, but I’m no doctor).

Next, we see this woman (Cori) go and clean a vacation rental, scrubbing and listening to music, then return home to presumably find the dead Berg, because they are neighbors. Berg is a traditional hippie stoner, and even though we only meet him briefly, viewers can understand through his friends talking about him that he is essentially Michael Caine’s character from Children of Men. Cori, on the other hand, looks just like David Lynch (and by the way, has some kind of weird Lynchian encounter during a bar scene that never gets resolved), and she’s also a traditional stoner. There is a temptation here to read into Berg’s death as an allegory of the phasing out of old school weed culture —  we do seem to be in a place where things are moving fast and changing non-stop. Maybe there won’t be any Cheech or Chongs left in a few years,  just dudes on Boost Boards, Juuling CBD on their way to the WeWork. I generally don’t think that this show operates with a lot of allegory, so this might be a bit of a stretch. 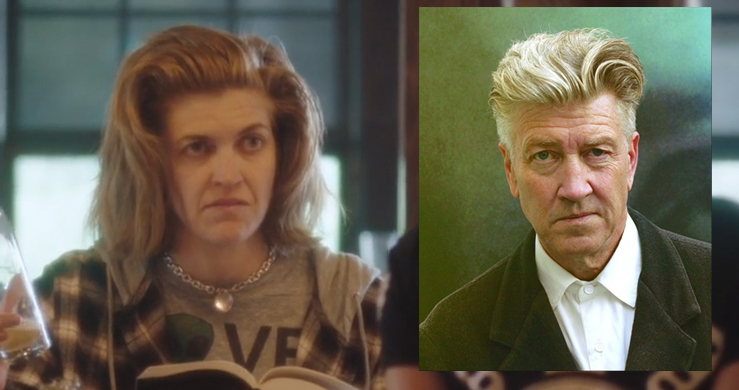 Berg’s memorial service is the the emotional centerpiece of the episode, and a recital of the show’s favorite motif — the production of tension between sentimental energy and irony. We get a bunch of stinky stoner idiots wailing and chanting around, right after watching Cori tear up talking about Berg, who seems like an absolute chiller. How come they can’t tell that the music they’re playing at the memorial sounds terrible? How is this fun for them? It almost seems rude — they’re at a funeral — and we see this look on The Guy’s face, like maybe he’s about to leave, or maybe it’s just going to jump-cut away. But no, instead, The Guy lifts a musical triangle into the frame and gently taps it once, creating a literal tonal shift that closes the scene out with some comfy sentimental feels. For as stinky and one-dimensional as this group of people are, they are sad, and their sadness is beautiful. This is the kind of sentimentality that High Maintenance revels in, and it usually comes in right after some moment of serious discomfort.

This scene couldn’t help but remind me of a time from work. Years ago, I used to deliver weed to this family in a gorgeous older building in Park Slope. The father was sick, his son would call our service, and I’d come over to hook up the dad and his friends. The father was always in this big, reclined medical chair in the living room, and more than a few times I showed up to find a whole drum circle of older hippies who’d convened around his chair. I could hear them jamming out through the door while I waited to get let into the apartment from the hallway. And I knew the father was sick, but I never really put together how sick until one day. They’d ordered delivery, and in the time it took me to get there, the father died. The house was in a frenzy when I arrived, and everyone was so sad. His body was just in the other room. Despite this, they still bought a bunch of stuff like normal. Incidentally, I was reminded of this whole thing yesterday because I saw the son again, this time at his apartment. We are quite friendly now, but I do worry when I see him that I’ll always bring up this memory. 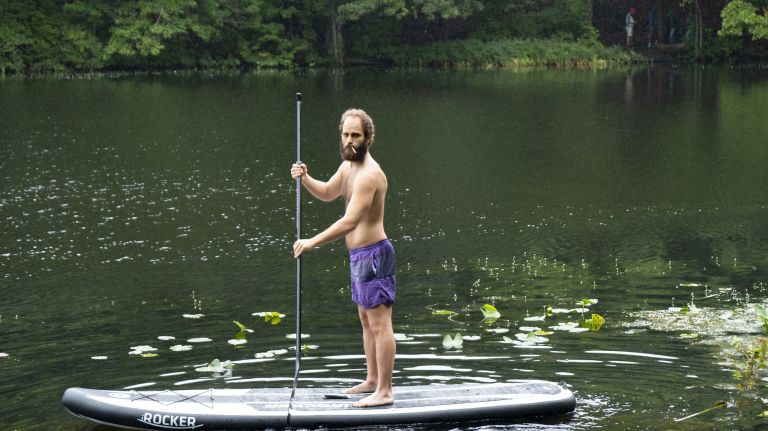 Anyway, when it comes to the general realism of High Maintenance as it relates to life as an actual weed delivery person, basically, the show is like 8/10 on realism. The Guy is the Vitruvian Weed Man. He’s the platonic ideal of a weedman, and we are all but pale reflections of his mathematical perfection. I was out there on the bike Monday this week, in that single digit shit, in that wind that would completely stop the bike from moving forward. The Guy, however, isn’t going to be out in that. The Guy works alone, and the back end of his business miraculously performs itself. This kind of one man weed serve doesn’t really exist in Brooklyn anymore. Sure there are traditional dealers, like James Franco’s character in Pineapple Express, but what The Guy does isn’t really sustainable. Almost every “Guy” that started out doing what he’s doing ended up hiring a few people because the workload really does become overwhelming. Like, you can’t take two weeks to go upstate in this business and expect any of your customers to still be there when you get back to the city. But regardless, it doesn’t really get in the way of the show. I’ve never seen the show as an attempt to recreate the drudgery of a job, so I give it a pass for having some of the details a little out of order. For the most part, the weed dealing aspect is just a narrative vehicle, an excuse to get the camera moving around the city and looking at the diverse group of people who all smoke weed.

Typically, I’ve felt that the moments and characters in High Maintenance are actually dialed down a bit from the insanity of the lived experience of a modern weed dealer. It may sound surprising, but how does one exactly depict the inflection and staccato of eye contact from a woman who simultaneously gasps and whispers the word “party” after you ask what she does for a living? The degree of seriousness in which the most delusional and socially disengaged weed smokers of Brooklyn will use when they talk to you about their plans and problems in their life is deeply unsettling and not suitable for television. It doesn’t stop them from being likeable, but it does hollow out the meaning behind “Brooklyn” as such, something I think show co-creators Ben Sinclair and Katja Blichfeld are indebted to as writers.

They carry an implicit respect for aspects of Brooklyn culture that serve as parody to so many people outside of this community. I’m talking about the vaguely homogenous culture of creative partiers that drifted back and forth from the old Secret Project Robot and the McKibbin Lofts. Like most cultures that shape themselves around hedonistic consumption and sexual freedom, the Brooklyn culture of the House of Yes, Rubulad, and its affiliates can’t help but be seen as a failure. This community was powerless to stop the incredible destructive force of gentrification, and there are many who argue that the trapeze artist Iowaska ritual urban farmers themselves were not merely incapable of stopping gentrification, but were very much the engines of it. Now High Maintenance didn’t create gentrification, but sometimes if feels like the show has a blind spot for it because of how the writers wield sentimentality as a formal device. 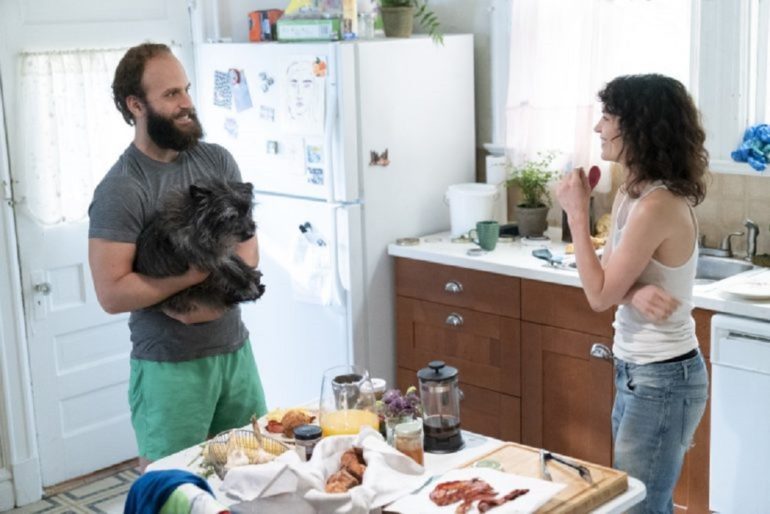 This sort of blunted realism kind of came to a head for me in the second act of the season three premiere. The Guy and his new romantic interest Lee are both Manic Pixie Dreamgirls. This may be a pitfall of intentionally under-developing your main character. Yet, they are extremely well-matured emotionally, and within just a day of meeting each other they are able to lay a lot out on the table. (We gotta give credit to The Guy here. I know a bunch of salty dudes that would get so mad if homegirl said they could sleep over then showed them to the guest bed; it’s nice to see The Guy as a positive male role model). I do like The Guy, and I hope it works out for him with the elvish-looking lady, but if that’s going to be what happens here, I’m gonna need them to stop being so darned easily amused.  It’s hard for me to imagine a woman of sound mind just walking up to Ben Sinclair in his RV and initiating a conversation; that’s classic Manic Pixie behavior. And because The Guy is also a Manic Pixie Dreamgirl, they don’t have any problems enjoying a good game of M.A.S.H. (which is actually the episode’s title).

Earlier this week on Monday, when I was riding in that five degree, thousand-mile-an-hour wind, nearly half the clients I saw wanted to talk to me about the new episode of High Maintenance, which would have been charming if they weren’t so savage for calling me out there in the first place in that fucking shit weather. I just wanna get this on the record, for the remaining years we have as weed delivery service people: When the weather is terrible, please only call us in an emergency. If it’s slow, I can go home, sit in a coffee shop, visit my friends… And we are always happy to do business the next day. Some folks say they are surprised that we are even open on the bad weather days, and the thing is, we are only open because you all keep calling. I’ll talk to you at great lengths about High Maintenance, but not when I can’t feel my feet and hands. Just pretend that Pokemon are real and that I’m actually The Guy. You wouldn't put the man through that, would you?

420
TELEVISION
HUMOR
NARRATIVE
MORE...
IN THIS STORY
CBD
Click to shop at our CBD store
NYC Andy
FOLLOW
NYC Andy is a weed delivery dealer based in NYC. Don't ask us for his number.
Share this article with your friends!
AD
By using our site you agree to our use of cookies to deliver a better experience.
Accept
Decline
MORE FROM MERRY JANE