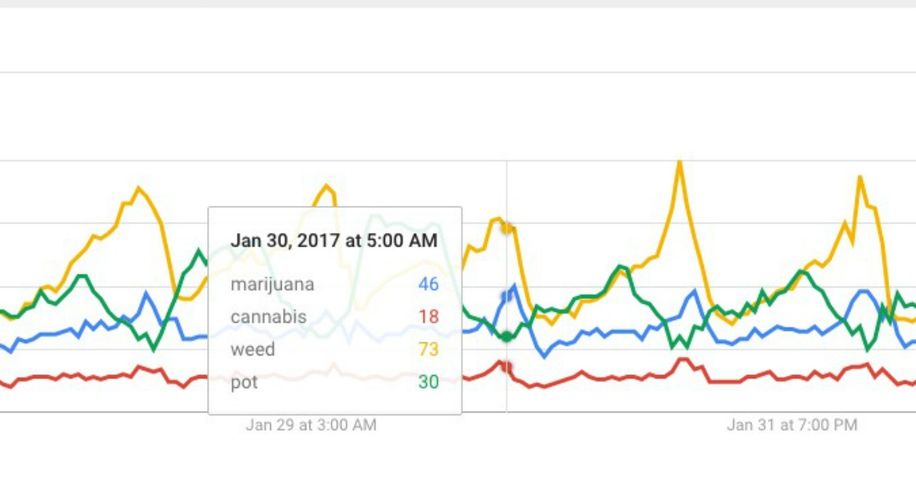 What Do You Call Weed? A Closer Look into California’s Favorite Nicknames for Reefer

No matter what kind of bud you’re smoking, it has at least 20 names. Weed, pot, cannabis, marijuana, piff, dank, nug, fire, trees, and that doesn’t even account for strain names that have exploded in popularity thanks to dispensary culture. It doesn’t matter if the joint is full of Cookies, White Widow or Zkittlez, the slang terms used to describe the sticky stuff are endless.

But, living in the tech-savvy world that we do, it turns out that it’s not that hard to figure out how popular those nicknames really are. In fact, using Google Trends, it turns out it’s downright easy. The Eureka Times-Standard plugged the search terms cannabis, marijuana, weed, and pot into Google Trends and looked at the frequency of searches for each word in California over the past week.

Overall, weed was most popular, followed by pot, with marijuana, and then cannabis pulling up the rear of the list.

Context, of course, is key, though, and while marijuana and cannabis are pretty hard to confuse, weed and pot are both words with multiple meanings. When the Times-Standard took a closer look, they found that the most popular search terms for weed had nothing to do with cannabis, and instead were searches for things like “weed killer.”

To take a closer look ourselves, we dove into the same Google Trends workspace, pulling up California’s last week, but adding only marijuana and cannabis as the search terms. While most of the state had been searching for marijuana, there was one metro area where cannabis was a more popular term - Eureka, CA.