CULTURE
5 Things You Can Do with Leftover Weed Seeds
AD
When and if you find seeds in your flower, there are several options for utilizing them in ways that do not involve a trash can.
Published on January 22, 2019

As cannabis consumers, you may occasionally find seeds in your bud due to hermaphroditism, stressed plants, light pollution, inexperienced growers, or just the luck of the draw. Before you call the dispensary and ask to speak with the manager to complain, relax. Don’t panic, either.

Seeds in your weed means that the buds have been pollinated — either from another male plant or from the plant's own hermaphroditic male clusters (those dreaded banana-looking growths). When you buy feminized, autoflowering store-bought seeds, they are hand-selected and almost always better than random seeds found in bud by accident. This is because there are higher chances that the seeds will yield female end products. Regardless, when and if you find seeds in your flower, there are several options for utilizing them in ways that doesn’t involve a trash can.

Leading cannabis horticulturist Ed Rosenthal, who has grown and experimented with cannabis his whole life, was able to lend a hand. When we asked Rosenthal what the best course of action is in the event that you come across seeded cannabis, he told MERRY JANE, "Be sure to pick out all of the immature seeds. You don’t want to smoke those. And set aside the healthy mature seeds for later, which may be worth growing."

The larger, darker, viable seeds are distinguished in appearance from the smaller, whitish, immature seeds, which are a little harder to find inside the bud. Seeded cannabis is generally lower quality than top-shelf sinsemilla, but it’s best used in edibles, says Rosenthal. This is because all seeds will be removed in the process anyways.

Now that you have picked out your seeds and separated them from the cannabis, there are a lot of different things you can do with them. Here are five ways novices can use leftover seeds. 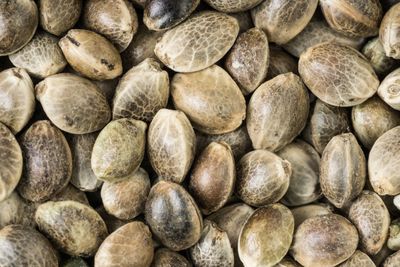 Why not test out your cultivation skills with a hobby plant grown in your window sill? While you shouldn’t expect a high yield, or even expert-level cannabis, experimenting with plants is fun. Look at master cannabis bonsai growers like Budzai or Bonsai Empire for inspiration. The possibilities are endless, and the stakes are low.

Spread a little love on your next hike in a hidden wooded area — Johnny Appleseed-style. Then, simply walk away. Let nature run its course from there! Who knows? You may start noticing flourishing wild patches of cannabis wherever you dropped them. Or, if you’re inclined, plant the seeds somewhere public, like a park, and see what happens. Just don’t take credit for this, as it’s likely a felony! 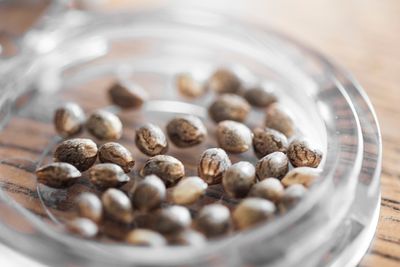 Try to return the seeded weed at the dispensary. In almost every case, the budtender will say “no.” That would be like trying to return fruit at the grocery store. But seeded cannabis is weighed down by the seeds, making it lesser quality, so inform them of the sub-par cannabis and move forward.

Save Them and Eat Them

Can you eat cannabis seeds like hemp seeds? According to Quora, yes. They can be unshelled, shelled, or roasted. Like hemp seeds, there are some benefits, though not the same benefits as, say, an edible infused with THC and CBD. Rich in Omega -3 and Omega -6 fatty acids, eating seeds can help protect your brain. It may also help prevent mental health issues, dementia, or Alzheimer’s. Seeds are also rich in vitamins A, E, D and B, plus they are chock full of minerals like sodium, potassium, iron, zinc, and sulfur. 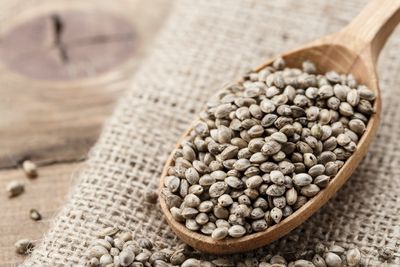 As a consumer there aren’t many ways to distinguish one cannabis seed from another. Reputable seed sources are trusted for their consistent quality, but buying seeds off the street is pretty much a no man’s land. Perhaps someone you know could use seeds for one purpose or another. Be careful, however, because the murky definition of the legality of cannabis seeds depends on what state you live in.

Grab a journal like Gold Leaf’s grow planners, or take a more modern approach with a growing app like GrowBuddy. Those notebooks can be used for seed data, too. Jot down your notes, and store seeds according to the strain that you found them in. Mystery seeds are great for future experimentation!

AGRICULTURE
420
LEGALIZATION
EDITORIAL
MORE...
IN THIS STORY
CBD
Click to shop at our CBD store
Benjamin M. Adams
FOLLOW
Benjamin Adams is a freelance writer whose work has appeared in a slew of publications including CULTURE, Cannabis Now Magazine, and Vice. Follow Ben on Twitter @BenBot11
Share this article with your friends!
AD
By using our site you agree to our use of cookies to deliver a better experience.
Accept
Decline
MORE FROM MERRY JANE